I got home from Taiwan so that I could go on a pre-scheduled family vacation the next day.

We flew out of the Haifa airport, which is the second-smallest airport I've ever used. It has 2 gates: an international one and a domestic one. There was one check-in lady, and one security line, one immigration officer. There is one food establishment that's basically a snack bar. But this is for Israelis (who love duty free), so it had a duty-free shop that was at least twice the size of the waiting area. That shop took up like half the airport.

We flew TUS to Larnaca, and it does not feel like a discount airline. They fed us (a snack) on the plane, even though the flight was 45 minutes. Larnaca is a bit of a bigger airport, but it is still small, so we had an easy time working our way through to the taxis.

We had pre-ordered a taxi and eventually found the driver with our names on the sign.

We couldn't see much scenery out the windows on the way to Nicosia, but I noticed that it is obvious that the British built the roads here. They drive on the British side of the road. The highway signs all tell you what city is on the way from the exit, but not whether that is heading north/south/east/west. There are a lot of roundabouts.

We arrived in Nicosia, but the driver was struggling to find our hotel. We ordered ahead of time, so there's no reason why he couldn't have made sure he knew where it was ahead of time or at least printed a map. Also, he had some sort of gps/maps thing on his phone. I have no idea why he didn't use that. Instead, he stopped somewhere, got out of the cab, and asked some people for directions.

It took some time, but we made it to our hotel, Kipros Accommodation. It's actually not that hard to find. There is a big sign out front clearly identifying it, and there's not too much else on that road.

The hotel's street is right next to the main street, so we didn't have to go far in order to get a nice dinner before bed, even though it was a little late.

The hotel is decorated as a sort of "rustic historic" hotel, and the staff is quite nice and helpful. The rooms are clean. The mattress is a bit hard, but it seemed pretty decent, especially for the location and price.

Of course, after a night sleeping there, I figured out that one of our windows doesn't close properly, so all of the street noise kept coming in all night long, including lots of people listening to great music as loud as I normally do.

Despite not sleeping as well as we wanted, we rose early enough to get a nice breakfast from the hotel. It's simple- slices of veggies, cheese, meat and bread, plus butter, honey, and jam- but it was good for what we wanted. (And the jam was really great.)

Today's plan was to just tour around Nicosia, taking it as easy as we needed to.

We started out with a leisurely stroll down the main street, passing mostly restaurants, souvenir shops, and other shopping. We turned to some side streets that had plenty of "historic" feel. One had a fountain that was marked as having been Byzantine. All had old-style brick streets. Many of the buildings appeared very Ottoman. 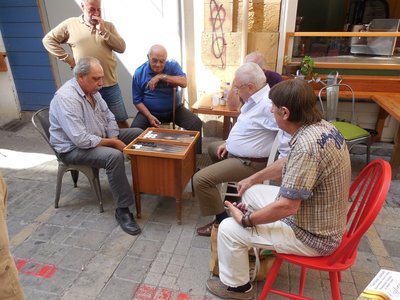 One old building housed the Leventis Municipal Museum. We entered and took our time learning about the history of Cyprus. The museum carries artifacts from the pre-historic times, through the Romans, Byzantines, French, Venetians, Ottomans, British, and modern Cyprus. Each room takes you one step more from the past to the present and has a good description of who fell, why they fell, and what changes came to Cyprus. I actually really enjoyed the little dive through history. 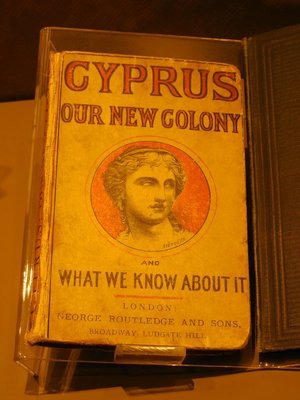 from the Leventis Museum-British cultural senstivity

Just a few buildings over, we saw Shacolas Tower. This tower isn't nearly as high as Taipei 101, but it still gives a great view to Nicosia and the area surrounding it. Like Taipei 101, each view has information as to what you're seeing when you look there. 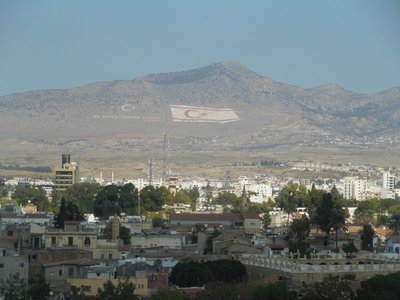 When we said that we were looking for seafood, the hotel staff had recommended Ocean Basket, so that's where we ate lunch. My food was ok, but the guys seemed to love their big pile of seafood bits. They ate fish, mini-octopi, mussels, clams, some sort of beady-eyed shrimp looking thing thing that I felt kept looking at me, and calamari. At the beginning, the platter was overflowing with food, and at the end their plates were graveyards piled high with shells and exoskeletons. 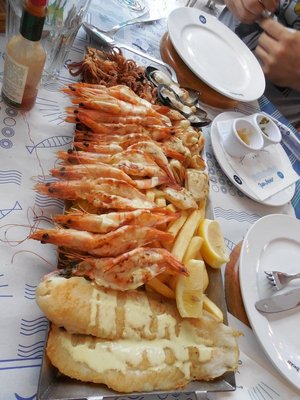 We took an afternoon rest, but I also went and took a walk around the city walls. The original walls were older, but the Venetians later expanded them and built the walls that stand today in a circle around the city. All of the "turrets" that were near our hotel were under construction, but it was still good to take a walk along them. 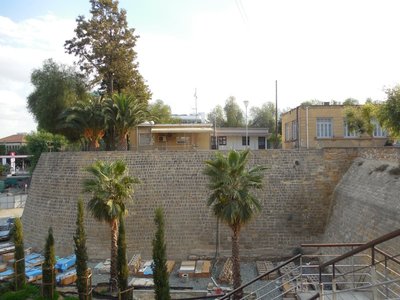 Next, we headed to the more east part of the city in the walls. Many of the houses we passed in order to get there were historic houses, build with old-fashioned doors. As one of our party used to be a welder, we frequently stopped to admire the metalwork. He knew the different techniques used to make the bolts, knockers, and gratings, and didn't hesitate to share his wealth of knowledge with us.

Eventually, we made it to the Omeriye Mosque and the Omeriye Hamam. The mosque clearly used to be a church, but when the Ottomans came it, they built a minaret and converted it into a mosque. The hamams were closed, but looked very Ottoman from the outside. 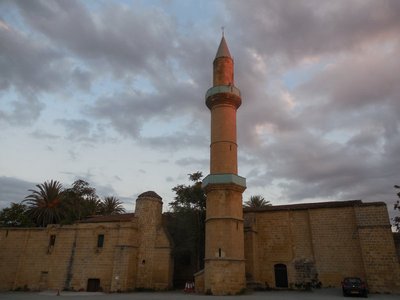 Next, we passed a house museum of a former rich guy (more on that tomorrow), and headed to the archbishopric.

The buildings were a disappointment in that they were very modern. I was hoping for something left over from the crusaders, but these had clearly been built recently, even if the grounds themselves were much older. 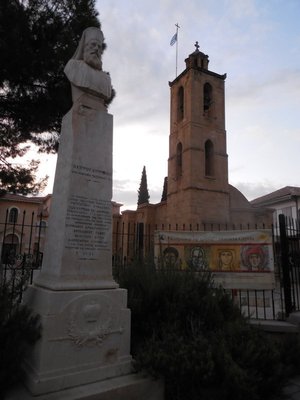 When we got back to the hotel, not everybody in our party felt like going out to dinner, so we decided to bring it in. I'm a bit embarrassed to say that we got KFC and McDonalds, but the food was somewhat different that it is elsewhere. Some elements were the same, but this McDonalds had a veggie burger that was more or less a falafel patty. This KFC had fries in a weird shape, almost like celery boats. It wasn't the most adventurous dinner, but it was tasty enough (especially the blueberry oreo McFlurry.)