For tonight's adventure, a bunch of work colleagues and I headed out to the Hsinchu night market.

The market we went to is walking distance to the train station, and seems to take place in a big empty parking lot. Of course, half of hte lot is used for parking for the market, and like the rest of Taiwan, it's over 50% motorcycles and scooters.

We entered the market and immedately were assaulted with the smells and sounds of cooking. Fryers bubbled, cauldrons of soups boiled, and knifes chopped away. As we wandered, we saw a wide variety of foods, many on sticks. 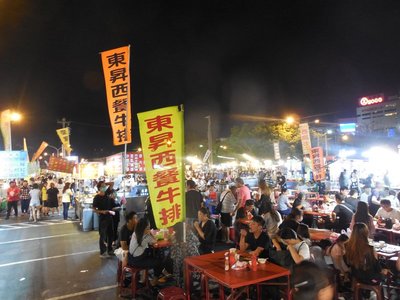 One stand had ears of corn that had been coated ins a spicy sweet sauce and roasted over a fire. (But the corn was not nearly as juicy as AwShucks.) Another stand had a large variety of meats on a stick. You were supposed to pick which sticks you wanted, put them in a bowl, and they would grill them for you. the variety included all sorts of interesting items from chicken skins to blood sausage. 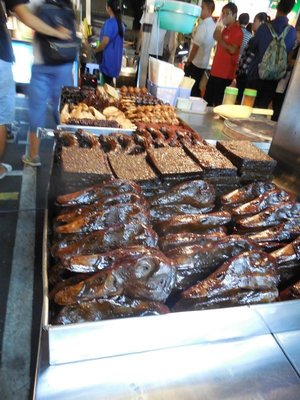 One of the more interesting processes to watch was how to make these octopus balls. the guy poured excessive batter into a mold for tiny round balls. As the mold cooked parts of the batter, he rotated it so that the mold would then cook another part. Somewhere in there, throw some octopus pieces in. Keep rotating the batter, and you end up with a ball. Of course, you have ot put them on a stick to serve them.

One of the foods that I found interesting and very enjoyable was this eggy-latke dish (not on a stick). They make the large potato and onion "pancake" part with extra egg in the middle. Then, they top it with herbs, a thick soy-based sauce, pineapple, corn, and some other sauce. I had no clue what that one was. I enjoyed it enough that I want to make it at home now. 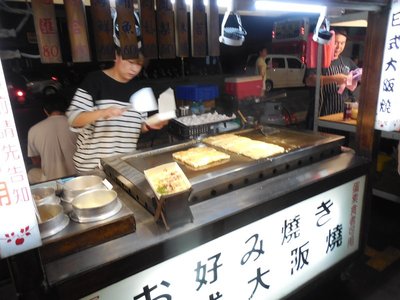 After that, eggs on a stick, corn on a stick, tapioca balls on a stick, and juice squeezed out of a sugar cane stick, I was quite full. Fortunately, there is more to the market than just food. 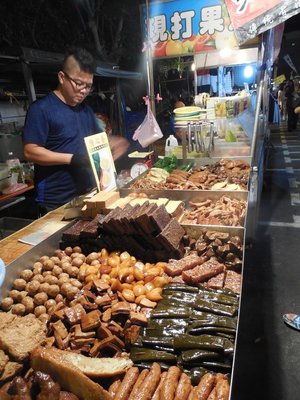 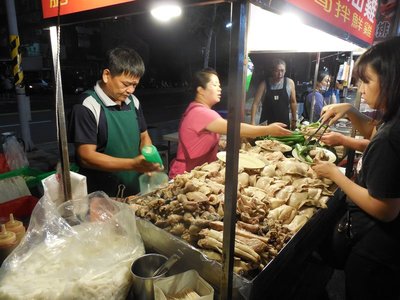 Every few feet, somebody is running a carnival game. The most popular one seems to be one where the players throw darts at balloons. The balloons aren't set up in a tricky way, just in a specific pattern on the wall. If you pop enough, you get a prize. I wanted to see somebody play and my colleagues didn't want to play, so I coughed up the dollar and took a stab.

My first dart didn't even hit the board. Another grazed a balloon, but lodged in the foam next to it. Then, I was on a roll. I hit the required number of balloons, plus one more, to win my first-ever carnival prize. I didn't really want one of the stuffed animals, but I saw one that looked pretty bad- it had one eye and crooked teeth, and I thought I'd get the ugly monster. Turns out, when you unsquish it, it's a dinosaur! Double win! 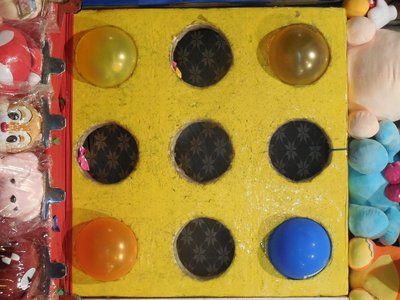 There were several other carnival games that I couldn't quite figure out how to play- one with Mahjong tiles and either bingo or matching, another with some sort of pinball launch and some holes. There were a lot of jewelry and clothing vendors. We continued walking around for a while, until we had seen all of the stands and taken in as much of the excitement as we wanted. 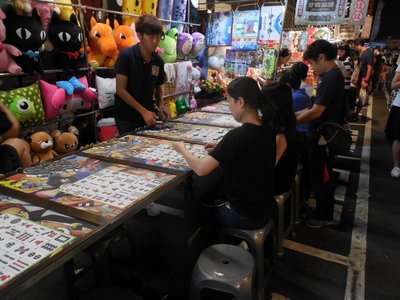 We headed back to the hotel with full bellies and a stuffed dinosaur.

Posted by spsadventures 05:12 Archived in Taiwan