So, work is taking up a lot of the day, as it's supposed to. The factory is similar to others in concept, but there are a few neat things about this location.

First, the buildings are very modern and clean. At least one is LEED gold rated, so you know that they're taking care of the environment. You can also see that in the way they have recycling everywhere. Even in the bathrooms they put educational signage for people to read while they're doing their business. While I can't tell exactly what it says, the basic idea is about how much CO2 is released by food traveling from afar.

Second, the buildings are very pleasant and calming. The art on the wall ranges from photography to landscape paintings, "shapes and colors" to horticulture. European classical music plays in the background. (So far, I've recognized some Beethoven, Mozart, and Handel.)

Lastly, the cafeterias are interesting. There are several different kitchens that each produce one type of food- the soup kitchen, the beef kitchen, the vegetarian kitchen, the rice kitchen. Some charge by weight from a buffet. Others involve some sort of ticket program that I haven't quite figured out yet. But both cafeterias also have a 7 eleven.

Outside, there is a 7 eleven almost on every corner. It's a bit ridiculous how many there are. Because we've been eating later when some of the other kitchens are closed, we've been eating a lot of 7 eleven. Sometimes, they give you little stickers with your receipt. I haven't figured out whether they hand out stickers based on spending a certain amount of money or buying certain products. In any case, the stickers are worth points.

I asked one of the guys what I could get with all of these stickers I'm "earning." We picked up a 7 eleven prize booklet to see. The prizes change every month, but this month, there are mostly discounts like buy 8 donuts, get 4 free. I don't know what I'd do with 12 donuts. But also, I don't want a coupon, I wanted something for free.

On the extensive prize list, there is only one item for free- a bottle of oil for 45 points. So tonight's activity was to go get my free bottle of oil. 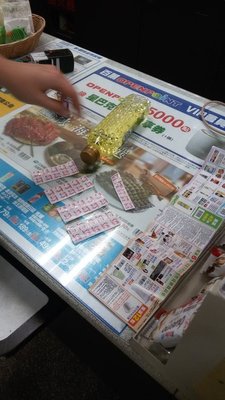 I was so proud. I walked in to the 7 eleven. Wordlessly, I plopped down the prize booklet, pointed to the bottle of oil, and then poured out my points onto the counter. The guy behind the counter checked my points, sighed, and then went to go find me my bottle of oil It's a bit of a letdown that it's canola and not something unique to Taiwan, but I'm still proud of my 7 eleven trophy. I'm not sure one should be proud to announce that "I eat so much 7 eleven that I got a free bottle of oil." But that's ok.

While I was out, I also had dinner at some random Chinese place. I adore google translate not only for the assistance in times like these, but also for the errors. According to my app, this restaurant served a lot of "surface." They had beef surface, chicken surface, all sorts of surface. I'm still not totally sure what that is, but I got something else that was mostly noodles. My colleague was supposed to be getting something with shrimp and spinach (per google), but ended up with a plate of sauced spinach ith no shrimp in sight. In any case, it was an adventure.

Afterwards, we finished filling up on appetizers from the lounge at the hotel. Apparently, a lot of the guys from work go there and make a dinner out of it. It's not bad at all, but I would get bored quickly with the hotel canapes.

Today after work, we ended up getting a cab to downtown Hsinchu, where there is much more activity than over here by the Sheraton. Tons of stuff was open and there were plenty of places to eat or shop.

Also, because it is the Autum Harvest festival, which celebrates something related to the full moon, plenty of people had set up family barbecues outside their house. Of course, this just so happened to be in the middle of the sidewalk where people need to walk. 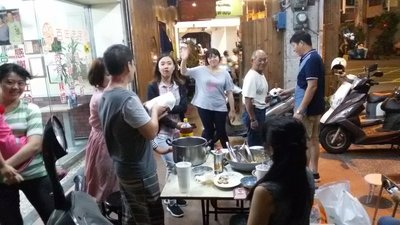 Family BBQ in the Street

We started at the train station because we thought we might pick up an English map of the area. Nope, just Chinese. We got it anyway, but it didn't really help us determine where to go. We relied on good old google to tell us where points of interest were. We couldn't necessarily read the names of all of them and didn't entirely know what we'd see, but we walked towards them anyway.

Our first sight was the old city gate. This piece of very traditional architecture sits in the middle of a traffic circle just over the river. You can't see anythign left of the city walls, but the little house above the gate is intact. I'm not exactly sure that you're supposed to go up to it. Nobody was in the middle of the traffic circle at all, and there were no crosswalks. But, it was lit up nicely, and the trees nearby were lit with colored lights, so it was quite pretty. 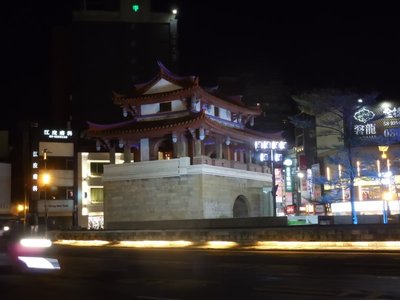 Nearby, a street vendor sold something that smelled really sweet and delicious. We determined that they were some sort of pastry that he made in an egg-shaped mold. His sign explained that you could get 10 for 30NTD or 17 for 50 NTD, which isn't really a sale. Maybe the number 17 has some sort of significance. We split a bag of 10, which was plenty. They were sort of like pancakes, but drier- not bad, but not great either. 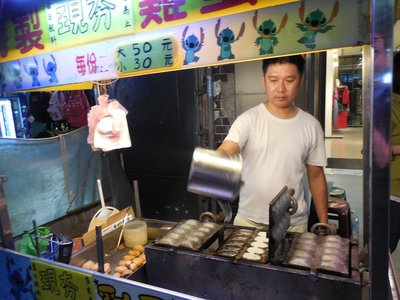 We moved on to the Sea Goddess temple, on the way peeking through store and restaurant windows to see what was happening. We tried to get seated at a small bar, but apparently they were closed for a private event tonight, concerning me about our ability to get a table for the holidays. We did eventually find a table at a restaurant in the Carlton hotel. It had an English menu and Italian-style choices. The food wasn't great, but the price was pretty decent for a hotel restaurant. It was more expensive than other food here, but it was definitely not breaking the budget.

Also, we stopped in a small temple on the way. We somehow communicated to the guy at the front that we wanted to buy an origami lotus flower. He said that it was 2 for 50 (about a dollar). We only wanted one, but he insisted on 2. So, we spent the rest of the night carrying around these delicate paper lotus flowers. 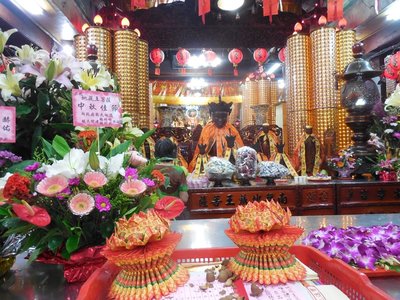 The Sea Goddess temple is visible from the corner of the restaurant property. Unfortunately it was night, so the colors of the temple didn't have a chance to pop out. But the delicate detail work is clearly there, and quite impressive. Because this temple is dedicated to the sea godess, the motifs were more fish and ocean related, although there were still plenty of dragons.

Per the sign out front, Hsinchu used to be a gateway to mainland China, and people came here right before going on sea voyages. So, they built this temple to pray for a safe journey.

Even today, the temple is full of people at prayer, burning incense and moving from room to room. 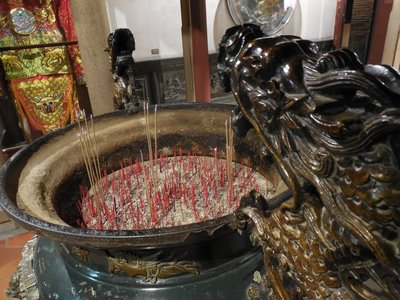 The next temple on our "Google-guided tour" was the Hsinchu City God Temple. This was a Taoist temple, hidden a bit by the market surrounding it. Inside, people threw crescent-moon-shaped dice as they prayed. Apparently, the gods were somehow answering their questions based on how the crescents landed.

Like the other temple I've seen, this one was absolutely covered in art. Every square inche that they could fill with something, they did. Just look at the pictures- it's pretty amazing. 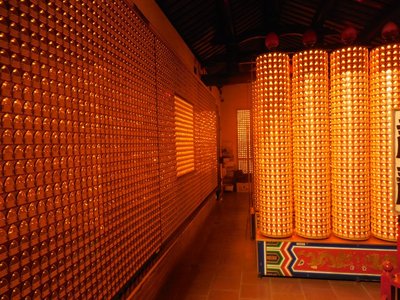 We wandered toward the next spot on the map, a Buddhist temple. I'm not good enough to know the difference between the different types of temples, but they are all beautiful. 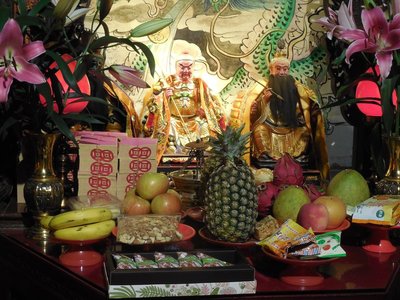 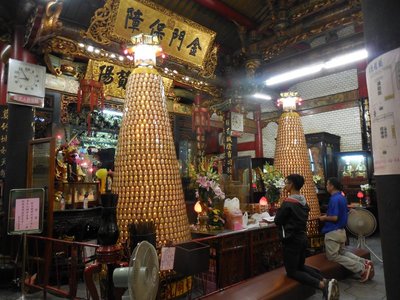 Praying at the Central City Temple 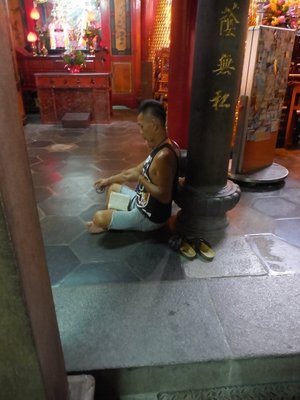 Throwing "Dice" to hear from the Gods

We also passed a lot of shopping streets. One had some amazing pottery shops. Another had a vegan restaurant offering "Vegan Eel Burgers." I had no idea what on earth that is, and needed to find out (in the name of science). Unfortunately, they were closed, so I still haven't figured that one out.

We crossed the railroad tracks to the Chulien Temple. Again, pictures are worth more than words. These temples are so full of amazing decorations, you just have to see.

We finally walked back to the train station to get a cab back to the hotel. It was late, but the town still felt pretty safe.

Posted by spsadventures 04:48 Archived in Taiwan