We may or may not have almost broken something very important at work today. Having decided that we finished what we could do, we got done early.

I took this opportunity to go to Taipei!

I'm noticing that the high speed trains have lots of leg room, but not lots of hip room. In any case, it's a short enough ride- about 30 minutes. This time, they only had unreserved seats, but I still got a good one and didn't even have to start by standing. 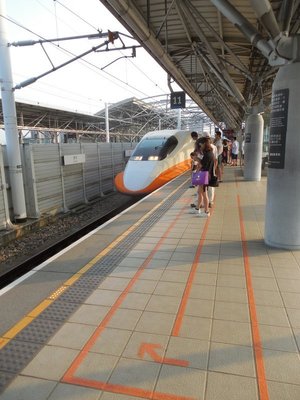 I metroed to the Longan Temple station and exited in a nice park. Several men sat on benches and played some sort of board game while crowds of other guys watched. 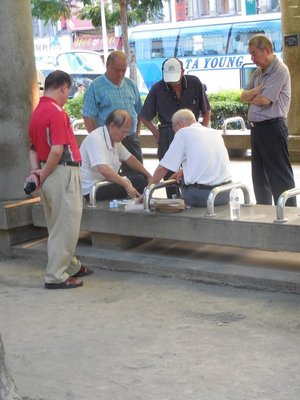 Gaming in the Park

The temple is at the other side of the park. Its colors weren't as bright and vivid as the temples I saw yesterday, but it was still amazing. I loved the koi pond and waterfalls, although they made one section of the courtyard so humid that I was sweating standing in the shade- in the evening. 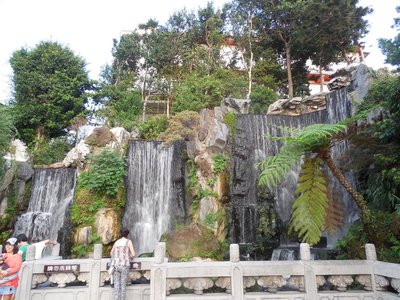 The temple is active, and many people had come to pray and make offerings. Offerings ranged from the more traditional flowers and fruit to the more modern packaged cookies and doritos. Of course, if you forgot to bring yours, the temple would happily sell you something. Same with incense. Many people burnt incense or candles. 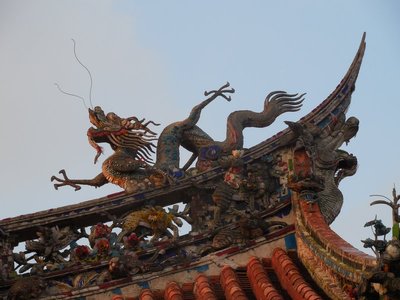 The temple bustled with supplicants moving from one shrine to the next, bowing and nodding and praying. It was quite the scene. 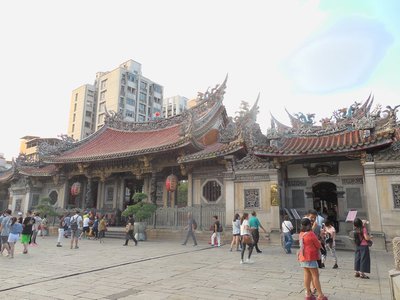 I took the scenic route to dinner, passing several more interesting sights. I mosied through what I thought was going to be another night market, but there wasn't really food. It seemed to be mostly clothing at first. Then, it quickly turned into a flea market where you could buy all of the used watches and tchotchkes that your heart desires. 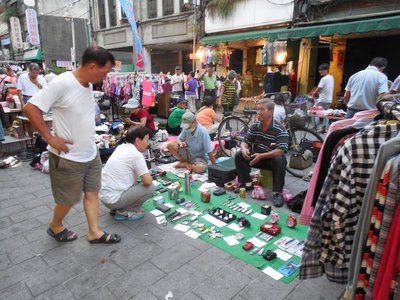 I passed by the Presidential Palace, which is visible from blocks away.

I passed another temple, although this one was much simpler and more plain. If the other temples were the Buddhist equivalent of Catholic cathedrals, this was the Lutheran equivalent. 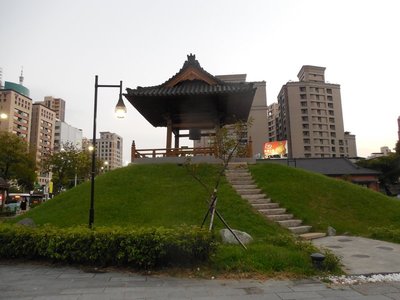 I wandered into a back alley by the Red House, where a bunch of artists sold their wares at a small market. Most of it was jewelry, soaps, or clothing. Much looked somewhat traditional and handmade, but a lot of it was very modern and clearly computerized. 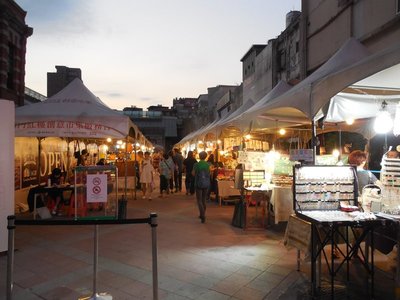 Finally, I reached my dinner destination- Modern Toilet Restaurant. I know it's gimmiky. I don't care. The chairs are all toilet seats (lids down). The tables are a piece of glass, supported by a porcelain bowl that has a large cartoon poop inside. The lampshades are shaped like a poop emoji. The wall art is a mosaic of poop. The menu is cut in the shape of a toilet. Some of the menu items are poop-themed, and all are served on toilet dishes- throne style for soups, lid-shaped for plates, squat style for thicker meals, and drinks come in ceramic urinals. Some food items are shaped into cartoon poop shape- like the chocolate ice cream. You're not eating there for the food, you're paying for the laughs. 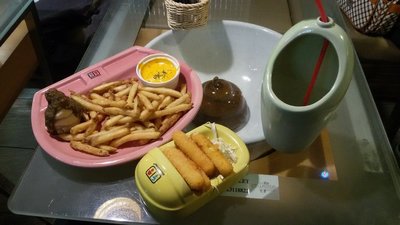 After dinner, I took a brief walk towards the river, but it appeared blocked off and hard to get to. Instead, I walked to the train station and headed back to Hsinchu. This time, I got the right train to the right station. I still took a cab back because of the heat though.

Posted by spsadventures 04:31 Archived in Taiwan