I got in to the hotel relatively late last night. I asked the lady at the front desk where I could grab some dinner. She informed me that there's really not much open after 9, except the hotel's 24-hour food. The room service isn't too expensive, so I seriously considered it. But I decided that there had to be SOMETHING open, so I ventured out.

The city was very shut down, but I saw an area with a few promising lights and headed towards them. The Starbucks was already closed, but the McDonalds was still open. I kept going.

I came across a convenience store with tables set up outside, almost like a street restaurant. Many people were sitting at the tables and eating, so I decided that this store must have something decent. Most of what I got would really be considered junk food or snack food, but I did manage a bowl of cold noodles with a sesame sauce and vegetables. 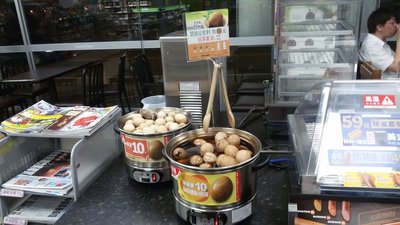 For whatever reason, I am entitled to hotel breakfast at 2 locations. Today, I tried the regular buffet on the 2nd floor. It was incredible! Indian food, Chinese food, Korean food, Japanese food, American food, salads, fruits, cereals, cheeses, vegetables. They "only" had about 6 choices within each category, but they had something for anyone. I have to say that I'm impressed.

The cab to work was relatively cheap, and work was pretty normal. The cafeteria had lots of very affordable choices. I wasn't 100% sure what I was eating, and my local host didn't know the details, but it was all decent.

When I got in at night, I took a walk out to dinner. I passed a gym with about 300 mortorcycles parked out on the sidewalk in front of it. I passed some interesting buildings that appeared as if somebody built a skyscraper, but then decided that they needed a piece of ancient Greece on top.

I found a vegetarian restaurant for dinner. I asked the waitress what her favorite thing was, and got that for dinner. It was some sort of stew that comes out with a flame under it. It was tasty and spicy, although more mushroom-heavy than I usually prefer. My favorite vegetable in it was the squash. They mellon-balled it so it was both juicy and crispy. 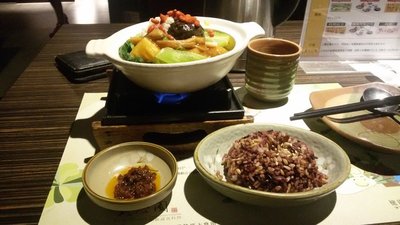 I turned in early, with hopes to be able to have an early start tomorrow.

Posted by spsadventures 23:39 Archived in Taiwan