This week, I discovered the gym at Sugar Bay. The gym is not just for people staying there, it is public to anybody. One of the ladies from work goes there and had invited me along. For 15 EC, I got daily access so that I could attend the 5:30 class. The instructor is definitely not professional, but the atmosphere is fun. Some nights, he runs a “circuit.” It's in quotes because the activities are very repetitive and not timed. For example, he'll hand out a jump rope and say “do 1000 jumps.” He gave us sticks and said to kick to touch the sticks 100 times. Other activities include standing up from a chair and lifting each knee 100 times, doing 10 laps around the courtyard with a basketball, or swinging a tennis racket back and forth 500 times. I did the activities in sets because I felt it would be most healthy and effective, but I was definitely sore in the end (which is good). Some nights, he teaches tae-bo. This class is even more unprofessional, but definitely more fun. I say unprofessional because he's counting to 10s (mostly, but also whatever number he feels like) instead of 8s, ending up off with the music; he switches moves in the middles of counts, or at the end sometimes, but without warning as to what's coming next; he's obviously making a lot of this up as he goes; and a lot of the moves aren't symmetrical- he'll do a set of punches with the left and completely abandon the right. That being said, it is a great group and a ton of fun. The music is very upbeat and caribbean, which helps with the motivation. The instructor is pretty funny, and so are a lot of the regulars. The atmosphere is very conducive to working out for a long time without realizing it. Some days, it was close to 7:30 when we were done and I most certainly didn't feel like I had been exercising for a whole hour, much less 2. The class is effective for getting me off my bum, and it is good, safe, evening fun. For those who are curious as to how effective it is at weight loss- the guy in the class said that he lost 75 pounds doing it. Not bad! I highly recommend the class to anybody who is looking for something non-alcoholic to do in the evenings.

One night, the plant manager took me on a tour of the island. I had already seen a lot in my own explorations, but she was a very good tour guide and added a lot of local knowledge that you just can't get from exploring on your own. She explained the different housing styles along with the government programs that inspired the newer cement ones. She took me to the part of the island where the sand turns from white to black (volcanic). I got to see black rocks, which is a very beautiful place. It reminds me a bit of parts of the Great Ocean Road in Australia, but is also very different. Someday, I'd like to go back and explore there a bit more. She showed me all of the little villages and towns and shared with me some of the unique properties of each. For example, there is one town where all of the locals still go out in their boats to fish every day. There is another town that is known for taking a lot of pride in their homes and in their town. I saw the high school that my company adopted and supports. Also, I found out that what I thought was monkey sounds on my previous adventure was just very, VERY loud cricket sounds. Overall, it was a very pleasant and educational drive. The only really negative I have to say about this week is that I'm getting a bit tired of the mosquitoes. I douse myself in Off, but I'm still getting bitten. The mosquitoes that live under my desk eat me alive in the mornings and evenings. I guess that the lizard that lives under my desk either doesn't eat them or can't get as high as the mosquitoes are. 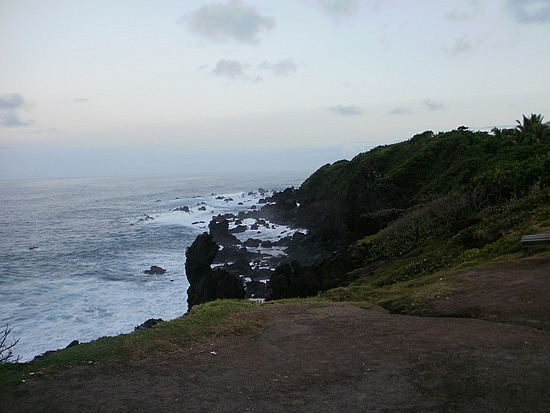 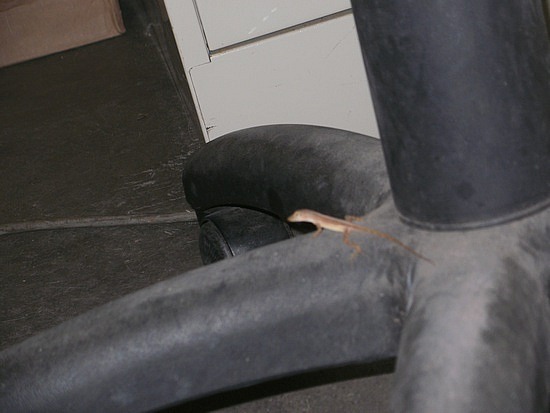 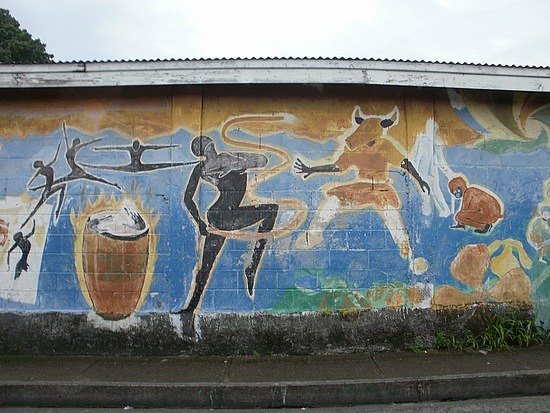 Mural at town along road around island