Today, I had some more flexible work hours due to the advanced status of the install and the midnight meetings. I worked a leisurely 5 hours from the hotel in the morning, with a short swimming break.

When I usually go to the pool (6am) it's full of business people getting in their morning swim. Around 10 though, music pumped for a pool aerobics class. The vibes are totally different.

I took advantage of my stretched-out work hours to stop by the kimchi museum, which is only open during the day. I got in free with a coupon from the Insadong visitors' center! I learned how to make kimchi, the difference between fermentation and rot, and most importantly- there are sooo many kinds of kimchi. The spicy napa cabbage kimchi that comes to mind as "default" is like the dill pickled cucumbers that come to mind when somebody says "pickles." But just like pickled eggs or mango are also pickles, there is eggplant kimchi and not-hot kimchi. Pretty much anything that uses the specific cold fermentation process can be considered kimchi. 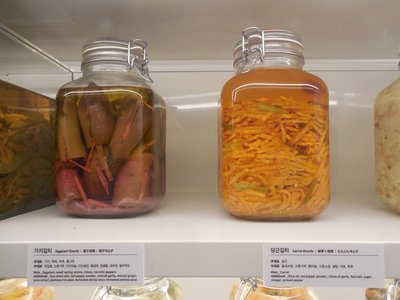 The museum is near Insadong Street, the old-style artist street full of interesting shops. 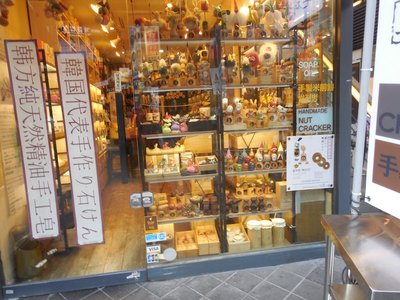 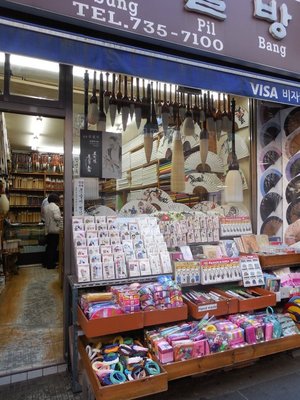 (Not at the museum) I also had lunch. I saw a bakery with something called a "Potato Volcano" and knew I had to try it. It's a bread "mountain" exploding with cheese and potatoes in a form close to Arby's curly fries. It's spicy and cheesy and chewy and sweet. It's something I'm going to try to replicate at home.

After lunch, I worked a few more hours, then headed out again for dinner. Tonight, I had reservations at a Michelin star restaurant. It has a set menu that was very reasonable for a Michelin restaurant, but over twice what I'd generally spent on a whole day's food. I originally was hesitant to try it due to the cost and because the menu was a bit mushroom-heavy (and I don't usually like mushrooms), but I'm glad I did. It was a very unique experience. 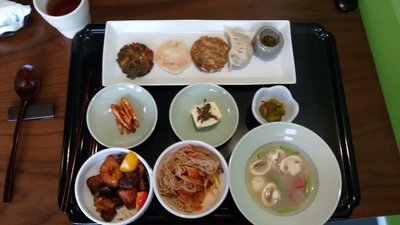 First, the diners are all separated into little booth-rooms that hold 2 tables each. They block some, but not all, noise from the neighboring tables, and give a sense of privacy and exclusivity.

The waiters bring the course to the table and give a full explanation of everything before you eat it. The courses generally contained lots of tiny bites, but even so, I was very full at the end, and couldn't finish the last meal course. Most of the food was tasty and elegant, but a few items stood out.

The tea was bitter like coffee and was the only thing that stood out in a negative way all night.

One of the kimchi dishes had a taste similar to real deli-style sour pickles. There was a tang and bubbly sourness that I loved. One of the dishes involved a 7-year aged persimmon vinegar. I usually don't love persimmons, but I would love to know where they got that vinegar so I could bring a bottle home. Another dish had dried acorn jelly. I usually don't like acorn jelly, but dried, it was amazing! It has this great chewiness to it and this delicious umami taste. I have no idea how to replicate it, but you bet I'm going to see if I can learn. Prickly ash berries-they're the size of peppercorns, and have a bright, peppery flavor. They were strong and really popped. I think they added a lot to the meal, and this is another ingredient that I'm gling to investigate and see if I can do something with it.

I guess a mark of a good chef is the ability to make least-favorite foods into enjoyable dishes. I actually really enjoyed the deep-fried mushrooms in gochujang sauce, even though mushrooms aren't usually my thing. Of course, there were also several items that were exciting just because I never had them before- burdock, the prickly ash berries, corn noodles, red bean jelly, and kimchi pancakes.

This was definitely a meal worth the price. I'm so glad my Guy convinced me to spend the money!

After dinner, I walked over to Gyeongbokgung palace. This one has a night program. From 7:30pm, they start letting a limited number of people in to see all of the buildings lit up. I was able to get in to a special, shorter line for foreigners, so I got a ticket. 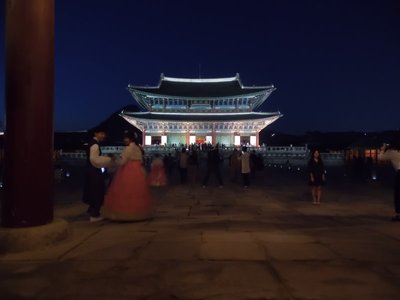 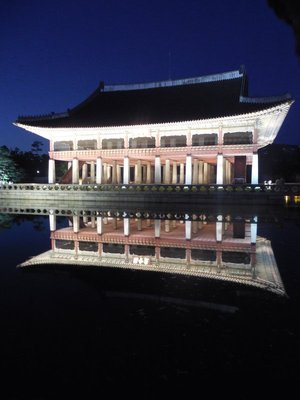 Palace lit up at night

The temple is beautiful at night. The architecture is similar to all of the others I already saw, but everything is different at night. The other major difference is that this palace has a glassy pond around one of the buildings, which makes for great reflection photos. All the locals know this, and swarm the place with their tripods for hanbok photos. 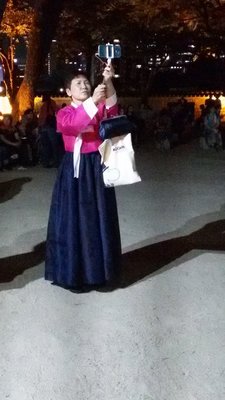 A hanbok is a traditional Korean dress outfit. Renting them is a big business, although if you want to try one for a few minutes for free, go to the kimchi museum. From my understanding, a good analogy would be people swarming the Louve at night wearing Marie Antoinette costumes. Or people wearing prom dresses, ball gowns, and tuxes for a night out. Half the fun was the palace, but the couples in hanboks provided the other half. Even some children wore them. Everywhere I looked, throngs of people gathered for photos in all of their glittery embroidered splendor. 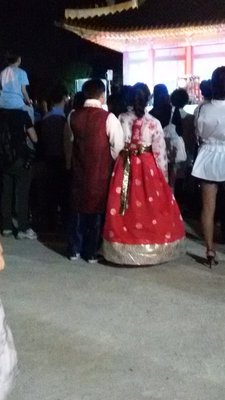 Later, the palace stage lit up and a performance started. Ladies in traditional costumes beautifully banged on drums to create stunning music. A singer (in another hanbok) sang a Korean song. And then some guy in a suit sang Italian opera. I don't imagine that was very traditional. At the second opera song, I moved on to other parts of the palace. I did have to get back for a few more hours of work. 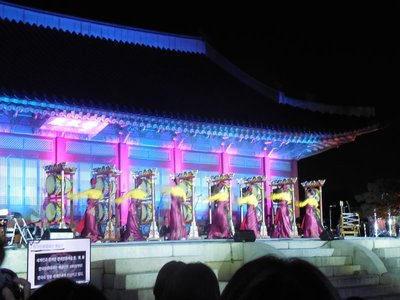 On the way out, I noticed a protest for the regulation of cat and dog meat. Interesting. Koreans actually seem very fond of protests and petitions. Earlier in the day, I passed some protesters banging on drums by the temple. I registered this trip with the State Department, and I get an almost-daily email about the various protests taking place that I should avoid. I'm intrigued by how their democracy seems to work. 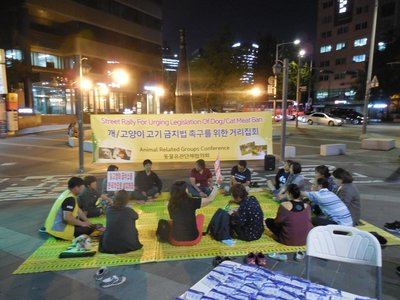 Protesters by the Palace 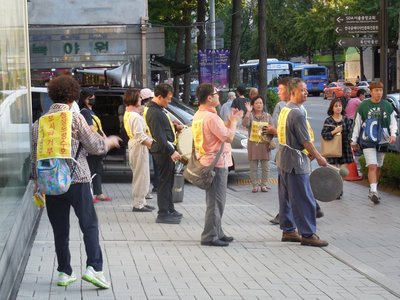 Protesters by the Temple earlier in the day