A few more cultural notes: I've noticed that lots of cars have little pieces of foam stuck to the door. Apparently, it's a courtesy to other cars in the parking lot. You uglify your car a bit so that when you open he door, there's no way it can scratch somebody else's car. I've never heard of that before, and can't imagine it being popular anywhere else I've been.

The hygiene here is amazing. I already mentioned the toothbrush stations in the bathrooms at work. But also they have a thing with shoes. People take their "outside shoes" off before entering a work area. Where I'm working, they have indoor sandals that people change into. And this isn't just because we are working in a cleanroom environment. I passed some government offices that had piles of shoes at the entrance. And of course, some restaurants have shelves at the entrance for you to deposit your shoes before entering.

Beyond the shoe thing, eating out is quite a different experience It is assumed that you want water at a restaurant, but they give you tiny cups for it (maybe 3/4 cup size or even smaller). You have to keep getting up to get more, or they put a small bottle (the size of an American restaurant cup) on your table for everybody to share.

Most people don't drink soda with their meals, and some restaurants don't even have it on the menu. You have to get it from vending machines if you want to try it. I've so far had chilsung cider (the national lemon-lime drink), some sort of rice soda with actual grains of rice in it (tastes like plain rice milk, but with soda thinness), grape soda that tastes the same as anywhere, and of course blueberry milk.

Another interesting difference I've noticed is the lack of salt and pepper or other condiments on tables. The tables do usually contain a drawer or bin for the silverware though (silverware = metal chopsticks and spoons).

The menus almost always are pictures. They may even have little shellacked plastic versions of the meals. Even if there's a language barrier, you can usually figure out approximately what the restaurant serves and then point at the pictures to be understood.

If you see a red bottle that you think is ketchup, it's not. It's gochujang, a spicy red sauce. It is used like ketchup- people put it on everything. It's in kimchi, soups, ramen, meat, vegetables, noodles, everything. For the first 2 weeks, it's exciting. But now, I've got to admit, I'm a tad tired of every meal tasting the same.

I'm also tired of having to get up early to go hunt down breakfast. For all that the hotel is amazing and seems to have everything, I don't have a microwave in my room, just an electric tea kettle. So this requires some creativity. I stopped off at a No Brand store. I know the idea is that they aren't a brand, but they're very popular in Korea, to the point they have a whole store. I picked up some pasta and sauce, and have been cooking it in the tea kettle for breakfast. It's not the best, but it means that one meal per day doesn't taste of gochujang and it means I don't have to get up earlier for breakfast.

I've had a few days in a row where we worked long hours or I had evening meetings and didn't get a chance to get out for anything other than food. Due to the time differences, I've been at midnight meetings and still been up at 5:30 am for other calls, and then gone and worked a full day.

At at least some of the food adventures were fun. Tonight, I went to another restaurant where you leave your shoes at the door and sit on the floor. It is a vegan restaurant. Apparently monks not only don't eat meat, but they also avoid certain spices- like garlic. So, the menu was marked with what foods were spicy or contained onions/garlic for those with restrictions beyond "no meat." 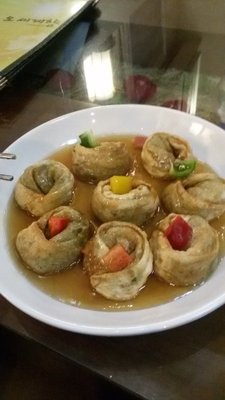 They brought out way too much food for one person, but I tried a little bit of everything. The vegan Korean Barbecue was ok, but I really enjoyed the sweet and sour dumplings. The sweet and sour sauce tasted just like the same thick sauce that comes with Chinese food anywhere else. And of course, like everywhere, kimchi and pickled radish were brought out with the food. They had a few additional small sides, but the only standout was the miso.
There was a night market near the restaurant, so I walked through it a bit. 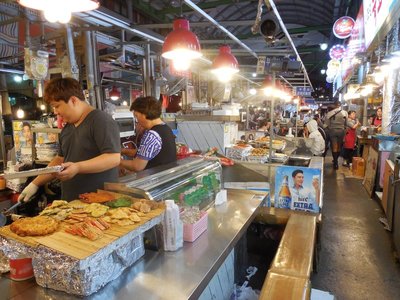 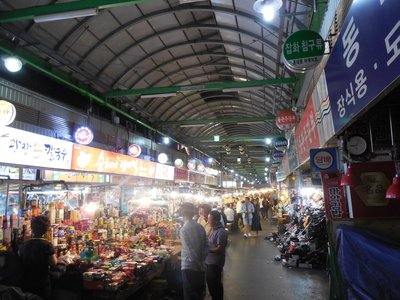 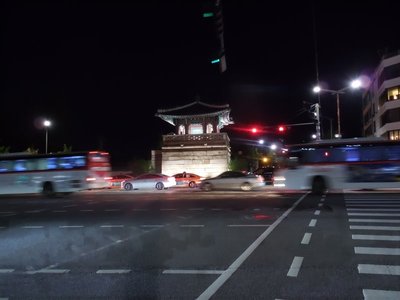 Lit up at night