Today, we went to a porridge restaurant for lunch. They serve big bowls of rice porridge (like congee but thicker) with various "mix ins." I got a spicy one, but many weren't. Because the porridge comes out in a huge, steaming bowl, you have to first put it in a small bowl, then let it cool, then you can eat it. Therefore, Koreans call this "slow food."It was ok, but the servings were big enough for at least 2 people.

We finished work a bit earlier than usual today, so I had a reasonable amount of time to go to Lotte Adventure World, an indoor theme park in a mall- not too different than Mall of America. 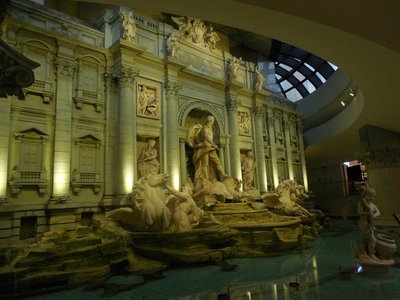 Trevi Fountain in the mall

Of course, from the subway, first you have to wade through a shopping mall in order to get to the park. It seemed the same as any mall anywhere.

But, on the way to the park, I passed Hoophoop, a bagel bakery. They had lots of interesting flavors- like red bean- but I opted for the oreo peanut butter. It looked to me like they had made some sort of oreo bagel, put peanut butter on it, and bagged it. I was gloriously wrong. These bagels are stuffed (think jelly donut-no hole in the middle). My bagel had all of the proper chewiness of the dough, but was filled with crumbled oreaos and peanut butter. It was the most delicilus bagel I have ever had in my life. Move over Einstein Bros, Chesapeake, and NY. Hoophoop has the secret. 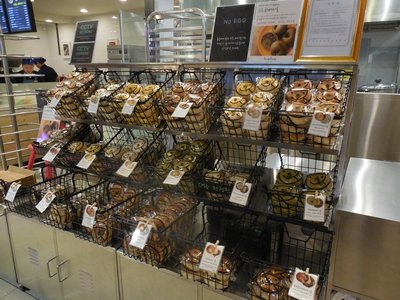 I'm noticing that some of the tourist attractions have deals where if you use a certain brand credit card, you get an automatic discount. Nanta was Visa. Lotte World is Mastercard. I'm going to make sure to ask at all similar places from now on. I also got a discount for going in after 4, so I saved quite a bit over the full price.

Like any amusement park, it's a bit overwhelming upon entering. You go into immediate sensor overload. Lights blink and flash. Each area has a completely different artistic or archetectural style- from ancient Greece to an Austrian Village to kids cartoon land to an ice rink. The smells waft in- meat on a stick, cotton candy, baked goods, soup. And you can hear the clangs of people playing arcade games, the chatter of the other revelers, the whoosh of the roller coaster, the screams of excitement. It's just so much to take in. 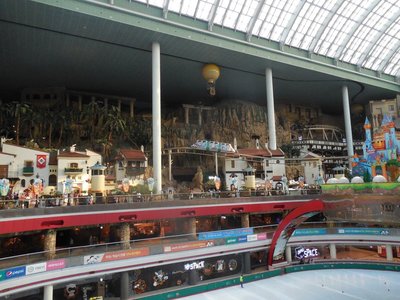 Like any amusement park, many of the rides had long lines, although for some I could just hop right on. I didn't wait in any hour-long lines, but I did my share of waiting, especially for the bumper cars. I really enjoyed the river ride throuh the jungle. The dragon shooting game ride was quite fun, although I was competing with myself. And the art for the Pharoah ride was amazing. 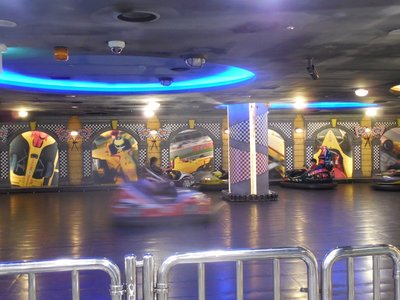 I tried to go to the cultural museum (what's an amusement park without a history museum), but it had closed early. I only glimpsed some of the shows on the main stage, but from what I saw, it looked entertaining. I rode as many rides as I could before they started shutting them down. So I grabbed second dinner when there wasn't much left to do.

I ordered ramen, expecting soup. I got something like bibimbap, but with ramen noodles where the rice would be. I'm really liking this whole "mix it yourself" deal with all the vegetables and hot sauce. 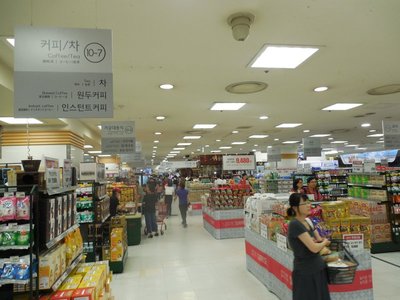 I found all sorts of exciting vegetables- like ginseng- but I can't really cook at the hotel (other than in my teapot). I did pick up some interesting snacks- mangosteen juice, coleslaw popcorn, green tea kitkat- as well as lots of hot pepper paste to take home. I hope to have enough hot paste to make kimchi and bibimbap for quite some time.