Breakfast yesterday came from a convenience store the night before. I thought I was getting uncrustables, but the fillings were peanutbutter CREAM and strawberry CREAM, not actual peanut butter and jelly. They were ok, but I prefer bolder flavors.

My plans were to go to the National Museum on the one night it's open late, but this is a work trip. Work comes first, and we got done really late.

It was a long enough day at work that by the time we got back to the hotel, the food court was completely closed. Jonny Rocket's was about the only thing open, and I'd actually never eaten at one, so I gave it a try. It tasted American.

Today, I had a bit more luck. While breakfast was a Marriott red bean cake- not so exciting, lunch was a yummy bibimbap that was similar to the one from the other day, but with different vegetables.

I got off the subway at the Myeong-Dong station, not knowing that this is a major street market location. On my way to the evening's plans, I passed tons of street vendors selling everything from clothes to food.

And what food they had! 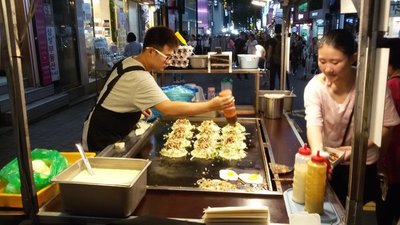 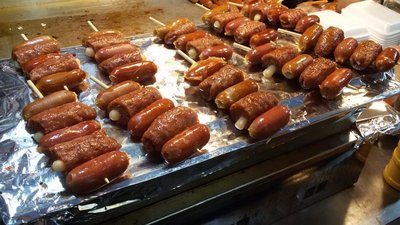 Food on a stick 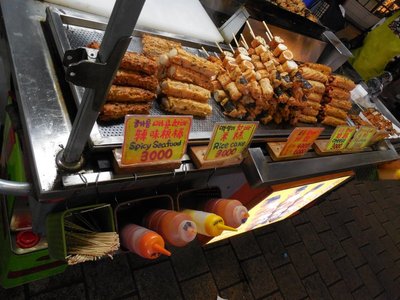 More food on a stick 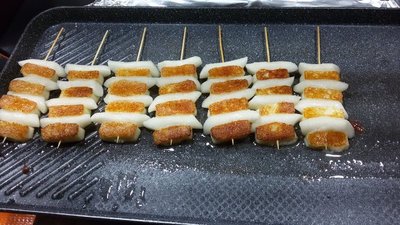 Even more food on a stick 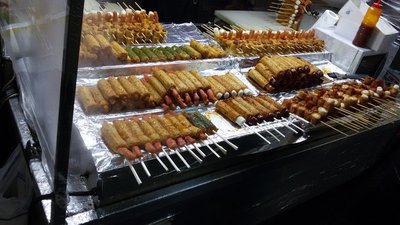 Soooo much food on a stick

My first bite was some sort of sweetish bread with an egg baked into the middle. 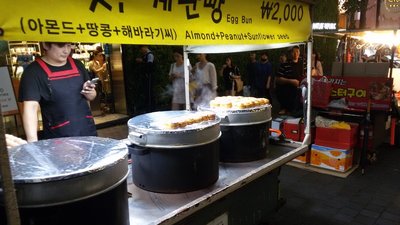 Next, I grabbed some mini kimbaps- one with jalapeno inside, one with cheese, and one with kimchi! Later, I got some sort of stirfried noodles and veg, which I covered in hot sauce. For dessert, I got an odd ice cream. The cone was a soft waffle in the shape of a fish. The ice cream was regular vanilla, but they plop a piece of honeycomb on top, wax and all. It was delicious! I even took home some sort of fish-molded filled pastry for breakfast. (I don't know why all the "traditional" foods use a fish-shaped pastry mold.) 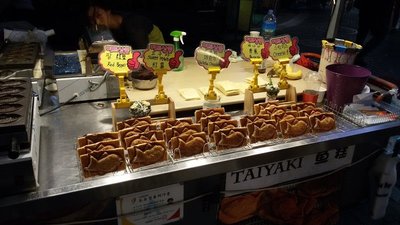 Dessert in a fish

Somewhere in the middle of all this, stands the UNESCO building that hosts the Nanta show. I expected the show to be gimmiky and just ok, but my expectations were exceeded.

The plot isn't the point. The show has only 5 "actors," all of whom must have a circus-incredible skill set. The show is very musical- but the music comes from them banging with knives, spoons, and whisks on pots and pans. The music is surprisingly good. Then, the various scenes have them juggling, doing acrobatics, dancing, performing magic tricks, showing off amazing knife skills, playing with a bit of fire, and performing slapstick comedy. It's very entertaining, and there are even several parts where crowd members get pulled up on stage or the whole crowd participates. I highly recommend this to anybody. I am really glad I went. It was definitely worth the price, and I actually recommend paying the higher price for the closer seats, as long as you're ok with having stuff thrown at you. 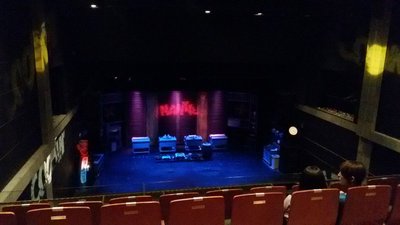