I've seen Holly's coffee on every corner here. (Also 7-11, Korean CVS, and Olive Young). I've never heard of Holly's outside of S. Korea, so I figured I'd try it. My bagel was actually decent, but the did the Panera thing I hate where they make you put your own cream cheese on instead of just doing it for you. Nothing too exciting, but very accurate to what you'd get in the USA somewhere.

Lunch today was Korean and huge. First, I had kimbap- Korean sushi. The rolls are the big rolls with lots of filling. But the rice isn't vinegared like Japanese sushi, so I didn't enjoy it as much because the flavor was somewhat bland. However, I got spice with my cold noodles. Basically, they take a pile of shredded cabbage, bean sprouts, and fresh hot noodles, then plop a bag of special ice on top. Spicy red sauce and half a hard boiled egg go next. The ice cools the noodles as you mix it all up, and ends up melting into a kind of sauce. It was tasty and interesting, although I could have done with half as much ice. In the end, you've eaten all the noodles and veg, but you're left with this cold soup-like sauce with mini icebergs floating in it. 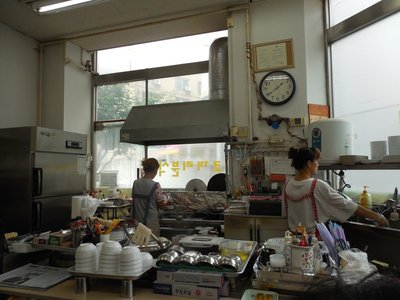 I noticed a churro truck parked next to the lunch restaurant. I've seen several since my oreo churro. Apparently churros are much more popular here than in the US.

After work, I headed to N. Seoul Tower. I got off the bus into a pretty-looking park, although it was too dark to really tell. I saw a path uphill that looked fun. And the I got on the bus. It went up. And up. And some more up. There's a good reason they have a cable car to the top. It would be a killer hike, although pretty awesome if the weather was chilly. 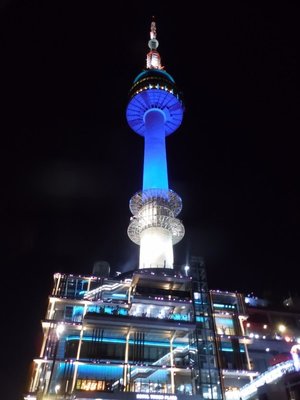 The view from the top of the hill, bottom of the tower, is amazing. You can see the whole city! But for a 360 degree view, you have to pay to ride the elevator up the tower. The view is great, I'm not sure it's worth the price at night. What I found interesting was that if you go down one floorfrom the main observation deck, the windows are printed with information telling you what you're looking at. This was interesting and should be on the main area, I think. 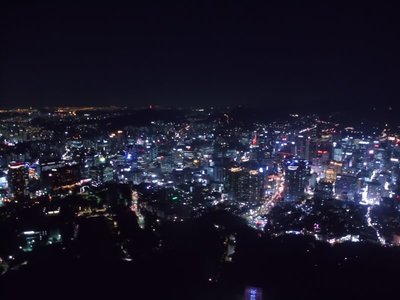 I rode back down to the base of the tower and grabbed some Udon soup for dinner. It was quite good. It was more or less the same as any udon soup, except they topped it with a perfectly vinegared age (fried tofu skin). And of course, it came with pickled daikon and kimchi. I'm quickly learning to expect these two with every meal, the way you get bread automatically at an Italian restaurant or olives at an Israeli one. It's just assumed. 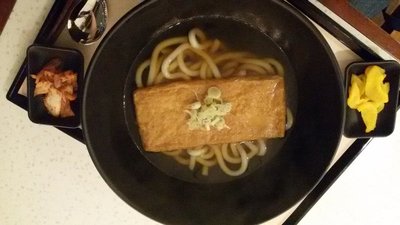 There are several other things to do in the tower- a Hello Kitty museum, a museum for taking pictures (similar to the Trickeye that I went to the other day), a teddy bear workshop, and a Hanbok (traditional Korean dress) rental place. They just weren't for me. 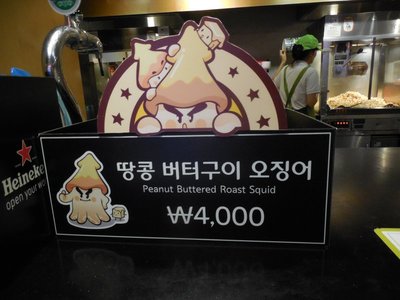