University on a Friday Night

Today I got up and explored the pool. It's full-length (25m I think) and they have all the kickboards, swimming caps, and other such stuff you might need. It was pretty crowded for early morning, but I guess a lot of people at the hotel have to work and want to get their exersize in early.

I'm happy to report that the breakfast sandwich I had from Cafe Mamas was soo much better than the salad from last night. I also had delicious lunch. We went to the cafeteria on campus near the bowling alley and barber shop. (You know that you're working for a big company when they have their own bowling alley.) The choices here were Baskin Robbins, a sandwich place, and a Korean snackbar. I think I surprised our local host when I beelined for the Koran. I ended up with noodles in sauce. The noodles are sort of like rice gnocchi or ziti without the hole. They're the same ones they added to the soup yesterday. The sauce was even spicier than yesterday though. In order to keep my nose from being too runny, I had to neutralize it with some blueberry milk. BTW, blueberry milk is even better than strawberry milk.

The only other thing of general interest that I can report about work: the toilets. Before I came, I was warned not to use the toilets in the fab. They were supposed to be horrible, but sometimes you just deal. The only thing bad was how unsophisticated they made me feel. I didn't know what any of the dozen buttons did. I'm reasonably sure one created some sort of spray (maybe like a bidet) and that one created air (maybe like a bowling alley hand dryer), but I was too much of a wimp to try them all out.

Meanwhile, over by the sink, there was a stack of toothpaste boxes with toothbrushes sticking out. Clearly hygiene is a priority here.

After work, we got smart. Instead of getting a cab back (2 hours in traffic) or a cab to the subway (1 hour in traffic + 15 mins subway), we just got basically straight on to the subway (5 mins + 55 mins subway, even with just missing the train and having to wait for another.) Also, I came prepared. I didn't need to stop at the hotel to drop off/pick up stuff. I just bypassed that entirely and heaed straight out.

Of course, the trains were not as empty as previous times I rode. They were packed. What I found adorable was that after they were packed, the people left outside to await the next train all lined up nicely in front of the doors until the next train came. It's all so polite and efficient. 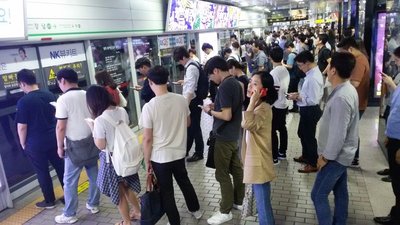 Nice lines on the subway

I arrived in the university area and headed for the Trickeye Museum. The Ice Museum ticket came free with that, so I went there too. The ice museum is basically an indoor playground made of ice. There's an ice slide to slide down, an igloo to crawl through, and plenty of photo ops- if there's somebody there to take them. It was certainly cute, but not really worth it if it wasn't free or a super hot day.
The Trickeye museum is also not as much fun without people to take pictures of you. The whole idea is they painted scenes that you can insert yourself into and take a picture as if you are part of the scene. Some scenes were doable with the timer function of a camera, but many weren't. Also, it gets old quickly if you're not a huge fan of getting your picture taken. Even though it's clearly more fun in a group, I don't think that it would be worth the price even then. 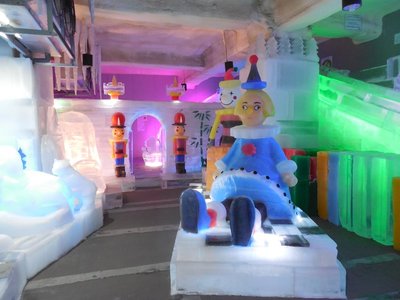 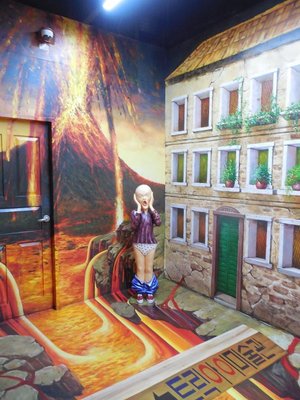 At the end, they had a bunch of virtual reality games. If you've never played one, that's probably worth trying.

It's Friday night and the museum is in the university area. The whole place is jumping. So many buskers and street singers line the avenue that their crowds blend together. Standing at any given point, I could clearly hear at least 2, if not more, street musicians at once, music clashing together and competing for attention. Of course, all these crowds mean the shops are doing great business. The restaurants are all packed and so much of the street food smells great. I started at a Topokki place, mainly to figure out what Topokki is. Apparently that's the name for the big rice noodles/gnocchi thing I've been having daily.

I ended up getting cheese rice topped with nori, and enjoying their pickle bar. The pickles were delicious, although I'm not really sure what veggies they were originally. I'll admit, cheese and nori is not the first combination that I'd think of, but they're good together. This is something I'd make at home.

I continued on, stubling across a churro shop. With oreo churros. They are as good as they sound.

I enjoyed more of the crowds and street performances, including a marching band, before heading back.