I promised a note about the breakfast I picked up last night- it was ok, but nothing special.

Today, we started our install.

I can't generalize based on this one day at this one factory, but from what I saw, Korea is just as modern as any other industrialized nation. The factory had just as many (if not more) safety procedures in place for the protection of the workers. It has hi-tech security (it is a hi-tech company after all). Unfortunately, that means that I couldn't take any pictures. So I'll do my best to describe it.

The campus itself is a cross between a college campus and a factory. It has the super-clean fakeness feel that college campuses have. The sidewalks are wide because most people just walk. They clearly spend big money having all of the gardens and greenery maintained. The intra-campus bus makes a quiet circle around the campus. And there are several eateries for the campus "residents" to lunch at.

But, other than the buildings that look like offices or even classrooms (from the outside), there are also some huge windowless concrete structures. These stadium-sized buildings are just as clean as everything else, but they have freight elevators. They have steam stacks. They are clearly industrial.

We spent most of the morning outside on the sidewalk. The trees have leaves that look like gingko, but apparently aren't gingko trees. The workers had cordoned off the unloading area, and several "safety officers" were set up around the area. The whole area under the crane and for a reasonable radius around it was permanently blocked off. But when the crane was in use, they didn't even let people pass the neaby passage way. It's apparently this guys whole job to wave orange batons at people to prevent them from walking too close to the crane- talk about investment in safety.

When we were finished unloading everything, it was lunch time- the best part of the day.

We walked to a nearby shopping area that was filled with eateries. I had told our local contact how much I adore kimchi soup, and he didn't dissapoint.

The restaurant we went into was set up somewhat like a fondue restaurant- there was a huge plate with an active gas burner under it at every table. Some people were getting life stir-fry of some sort, but we got kimchi soup.

As the gas heated up the soup, the waiters came by to prepare it right at our table. First, they used scissors to cut up a whole kimchi-ed cabbage right in the soup. Then, they broke up several blocks of tofu in the soup. They popped a package of ramen-style noodles into the soup. Lastly, they dropped these fat rice noodles with amazing mouthfeel into the soup. It was bubbling and boiling away, and time ot eat!

I thought it was a good level of spicy- my nose was a bit sniffly, but not majorly runny. My lips felt just a touch of fire and were burning for a short time after. But I have to brag a bit, the native Korean I was eating with had a much snifflier nose, and he was cutting the soup with rice and a variety of sides that they had put around the table. I was straight up downing the soup. 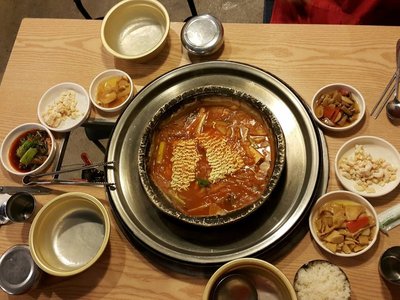 I was in heaven.

Did I mention that I adore kimchi soup?

We went back to work and suited up for the clean room, which was interesting. I am average height... for an American male. Unfortunately, they have separate gowning rooms here for men and women, even though the bunny suits go over your clothes like they do everywhere. So, I put on my women's super-duper 3XL that I barely could fit into, and met the guys on the far side of the gowning room, and had them pull a larger size from the men's gowning room.

For those unfamiliar with bunny suits- it's as if coveralls met a burka. You're covered from head to toe, with only your eyes showing. Mouth and nose are covered by a mask, hands are covered by gloves, shoes have special covers, and of course there's the full-body jumper with hood.

Once we got that situated, we did as much work as we could before we left for the day.

The traffic back was HORRIBLE. We ultimately had the cab stop at a metro station and just metroed back to the hotel. It would have taken hours longer to sit in traffic.

As is, I didn't have much time this evening. I grabbed a pretty horrible salad from Cafe Mamas. I thought it would be interesting because it had sweet Asian pumpkin on it, the dressing was some kind of orange something, and it had some mustard greens in it. It was interesting I suppose, but mostly just not good. The bread was light and fluffy though.

I had to get some work done, so I didn't really get a chance to go out. Even if I had, the chances of whatever I'd see being more exciting than the kimchi soup at lunch are slim to none. BUT I did get a chance to make plans for other evenings and days. I'm looking forward to my weekend trip to the DMZ, and I put all the info in my phone for several in-Seoul sights so that I can go straight there after work and not have to stop by the hotel first (assuming I leave my laptop here.)