Saturday, I got up with plans to run before I had to go to work. Unfortunately, it was raining. It seems to rain a lot here. I relaxed a bit, but it was still raining. So, I got dressed and went to work. Of course, it stopped raining then. At work, we were decorating for Christmas. This was the first time I've ever decorated, and it was fun at first. At some point though, the place was decorated, and I was done. The girls who worked in the two different buildings of the factory were still competing with each other to put up more stuff though. They each wanted to have the more decked-out building. So, I stayed and put up more stuff in an effort to be a team player. I had expected to be there for a couple of hours max, and we were now going on 5 or more. Then, we had to go get the Christmas trees from storage. Even in St. Kitts, a tropical place, they were using plastic pines. I would have been more excited to decorate a palm tree, but apparently that's not how they roll here. Instead, I attempted to decorate this 3-foot tall plastic pine with whatever leftover garlands were about, and do it quickly just so that I could get out and explore. The girls who worked at the factory did a much better job than I did. It was easy to tell which tree was decorated by the first-timer who was very much over the whole decorating thing. I was more than ready to go, and then they decided that the trees needed presents. I felt special because I got a present (wrapped empty box) with my name on it in under the trees in both buildings because I was the visitor. However, it would have been nicer to get out of there before dark.

It was long after dark when I finally did get out. I explored town a bit to see what was going on, as there was a cruise ship in the harbor and a lot of people, but didn't really see too much. The restaurant that I'd been trying to get to was closed, so I headed back to my hotel. I didn't feel like cooking or like Indian food, which is what the restaurant on hotel grounds is, and next to my hotel is a restaurant with a sign that named it Bangkok. The sign said that their specialties were “Chinese, Mexican, Sandwiches.” That intrigued me, so I ate there. On the inside, it is called “Twist.” At least, that's what was on everybody's aprons and what the bill said. They did have about 2 Chinese items, 2 Mexican items, a couple sandwiches, a couple pizzas, and a couple Thai items, but most of the menu was Indian. I asked the server what his favorite was, and he suggested the tikka masala, which is Indian and not what I thought I was in the mood for, but I got it anyway. It was good. While I was there, I was people-watching and just observing. I was highly amused by the caribbean rap videos playing on tv, while the sound system was playing Jummy Buffet. I was also amused by the guys at the next table over. There were a bunch of Asian business men who were enjoying the large variety of beers. They even pulled the owner over and were having a pretty in-depth conversation with him about the beers. Apparently, the owner is actually a beer importer who brings in hundreds of varieties from various countries all over the world. The restaurant seemed like a second thought compared to the beer importing, (but the food didn't make it seem like just an afterthought). The owner seemed like a nice guy. The waiter had given me the student discount (I love how people keep assuming I'm a student!) and the owner let me keep it, even thought I was not a student.

Today, the weather was drizzly- wet again! I wonder if all the rain gathered in the potholes in the street is a good breeding ground for mosquitoes. I am so bitten up by them! Despite my itchiness and the weather, I felt that it was still important to go explore, especially since I missed out yesterday. I started out in the direction of Turtle Beach. The roads in "the peninsula" are very hilly, windy, and potholey. I was driving very slowly up and down the hills, and was getting passed by a bunch of the locals, on the rare occasion that there were other cars on the road. It was pretty empty for the most part though. For much of the time, the only other primates around were the monkeys. I saw whole monkey families crossing the street. There wasn't a whole lot to see that that end of the island, so I headed in the other direction, aiming to stop in town for food. Nothing seemed open though. I passed closed restaurant after closed restaurant, right to the other side of town. So, I kept going. I passed ROSS (the veterinary school) and the med school before hitting the "countryside." The road was a lot of fun to drive, as it was right by the ocean. It twists and turns through various villages and even crosses a couple of creeks. There are signs telling what is what, but they are so text-filled that I couldn't read them. Eventually, the road leads to a sign for Caribelle Batik and Romney Manor. I went up to the entrance, and the guy who lives near there told me that the place was closed because it's Sunday and there were no cruise ships. So, I turned around and kept going on the road toward the fort.

The road to the fort entrance is extremely curvy and only wide enough for one vehicle most of the way. There are a few arches to drive through that are barely wider than a car, right at a curve in the road, and on a slope. There are a couple of pull-over points where vehicles can move over and pass each other, but only if you know the other people are coming at you. (There are signs that tell you to honk to alert other drivers, but I'm not sure how many people follow the signs.) It was quite the drive. When you finish climbing the hill, you're greeted with quite a view. You can see the fort above you, the sea below you, and the green of the mountains. It's gorgeous, but also practical as it would be virtually impossible to sneak up on the fort. I started my tour with the views, but then moved on to the gift shop area where they have a video to show about the fortress. The video is ok. It's short and gives an overview that's useful if you don't really know much about the history yet. Then, I went up the entrance ramp and into the fortress itself. The main area has a bunch of rooms, some of which have been renovated to look like they would have when the fortress was in use. It was interesting to see them, but I think it also would have looked nice to see the rooms as they are now. The various rooms had displays that talked about the history of the island and fort, the daily lives of those who worked at the fort, and the renovation process. Many of the rooms had posters that were from some other source (like National Geographic or some US tourist site). It was an interesting collection. Really though, the cool part was climbing to the top and seeing Saba and Aruba in the distance. Hanging out with the cannons and the serenity was definitely worth it. Maybe when a cruise ship is in town it's not as serene, but the day I visited I felt like I had the place to myself. When I arrived, there was one other car in the parking lot. When I left, there may have been four. It really was a calm day at the fort. Unfortunately, that may be why the "canteen" only had beverages. I was still hungry as the only thing I had was part of a very untasty cookie from the gift shop. Town still seemed shut down. I think the only places open were Dominoes and Subway, neither of which I was interested in. With nothing open and a constant drizzle, I decided that the best option was to return to my hotel room I ended up spending the rest of the afternoon cooking, skyping with the fam, and reading. Those aren't bad choices, but maybe I'll find someplace indoor and open on a Sunday for next time. 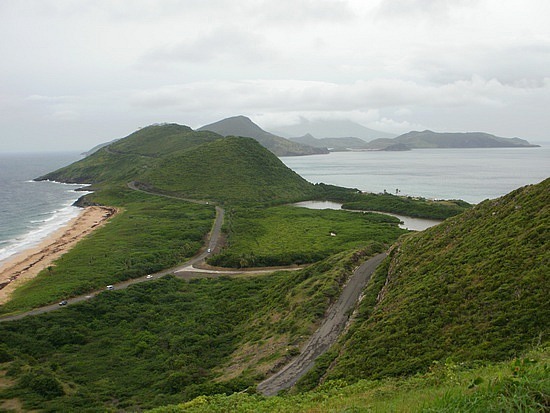 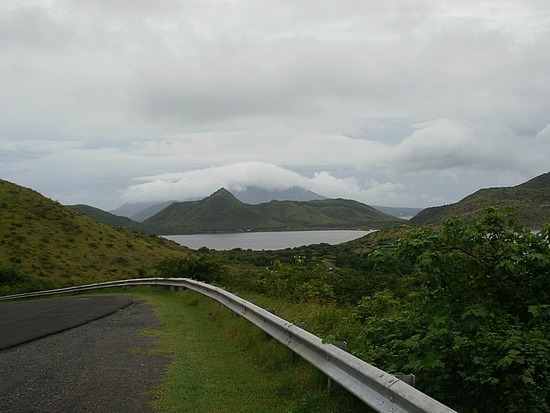 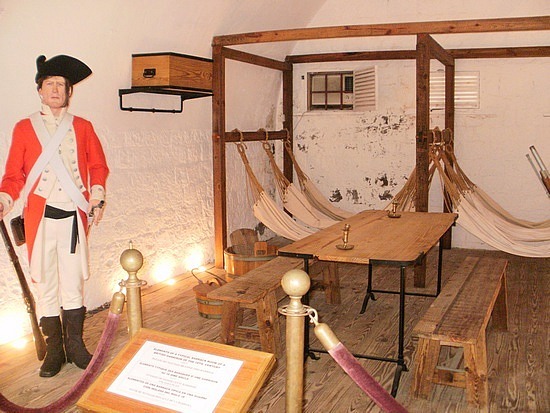 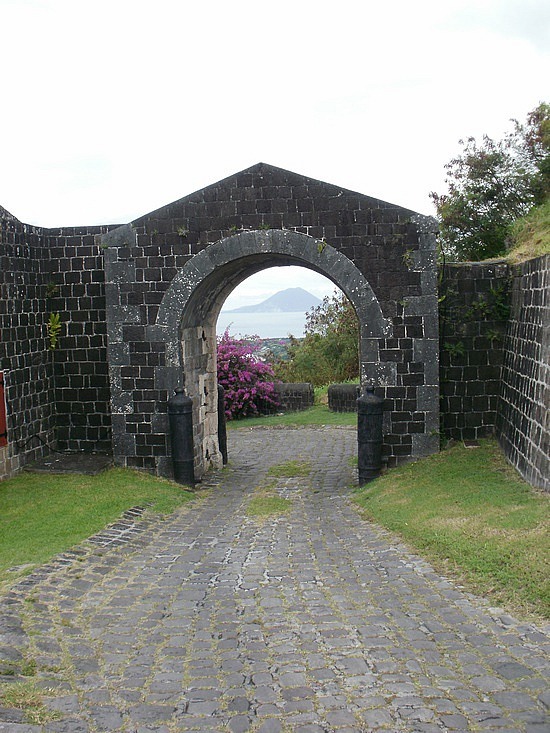 Drive up to fortress 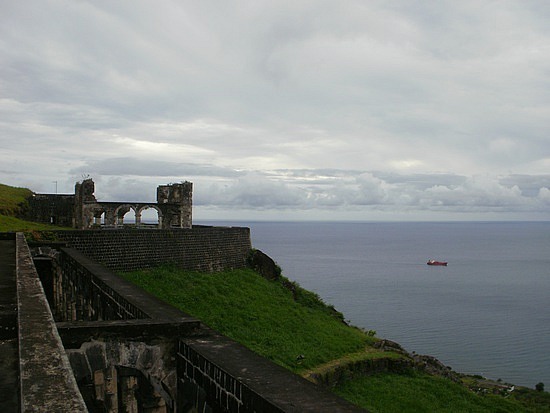 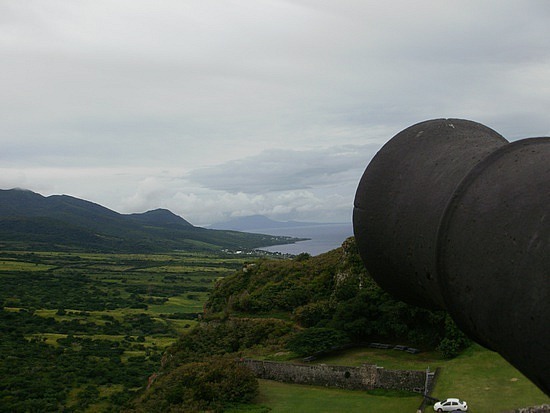 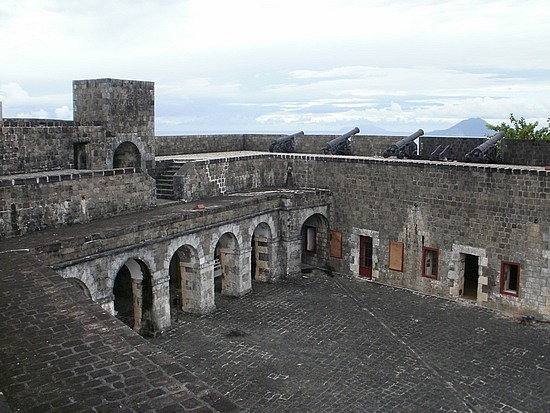 On top of fortress 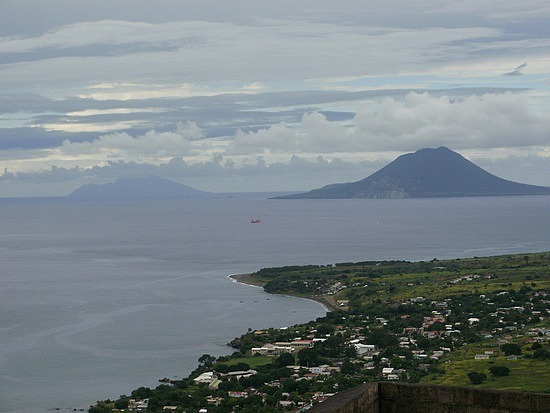 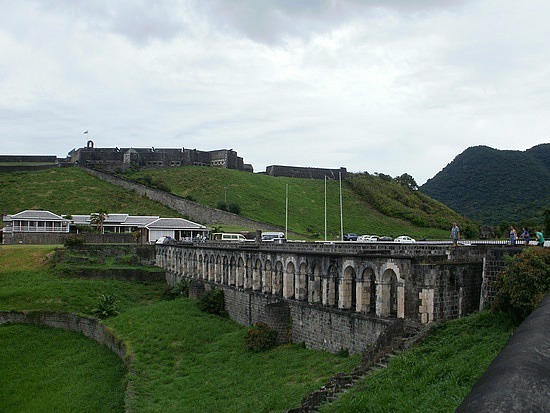 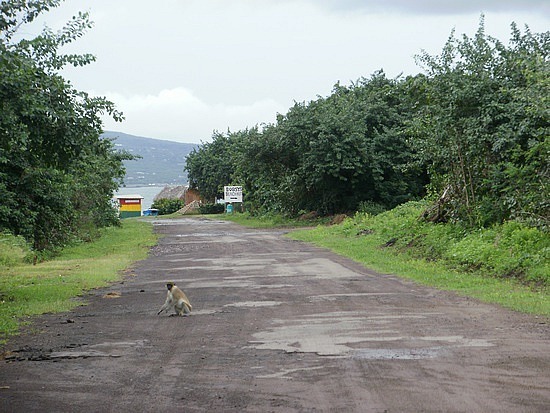