This morning, I got up to run. There is a very nice park by the hotel, but first I wanted to get my bearings. In an outward spiral, circling the hotel several times, I figured out what my landmarks will be and what I can't use as a landmark. Example- there is a GS gas station on every corner, so that won't help me get home if I'm lost. I also got to see the outsides of some of the malls from yesterday, so that helped a bit with the orientation as well. 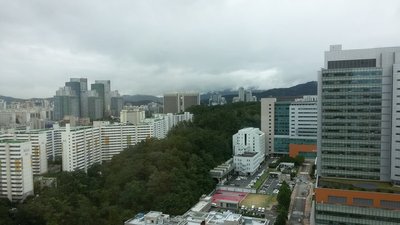 I have to say, that even though many signs have English on them, I'm really glad that I started learning the Korean alphabet before I got here. While visually it looks more like Chinese, it is read more like English in that every symbol/letter has a sound, as opposed to a meaning. While I can't say anything other than hello, yes, no, please, and thank you in Korean, I can read place names somewhat easily. Street names, subway stops, and other such signs where you don't have to know "meaning" just the sounds are so much easier to follow. If you're coming here for a while, it's definitely worth it just to learn the alphabet.

For breakfast, I tried to get back to the mall with the food court, but somehow ended up in a different mall altogether. It had a bakery with a few interesting items, so I ate there. I'm learning the system- you take a tray and a set of tongs, go over to the food. Use the tongs to put the items you want on your tray, and then take it all to the register to pay.

Once we gave the cab driver the correct address, the ride to work was somewhat uneventful. The ride back though, had a lot of traffic. Google said that the last few miles of our trip was going to take 45 minutes. I'm not sure it would have taken that long to walk. So, we pulled off the highway and went to a subway station.

I got my T-card (~$3). It's the Korean transportation card- fill it up and then tap it to pay a discounted price on transport. (Plus, it's more convenient than haveing to constantly buy 1-time tickets.)

The subway is so clean- it almost reminds me of an airport inter-terminal train. Even during rush hour, it wasn't over-crowded. it was actually pleasant to use. 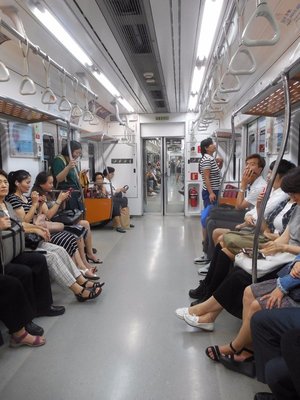 After grabbing lunch- some cheese-and-something-else (maybe sweet potato?)-stuffed spring-roll style wrappers (steamed, not fried), and dropping my work stuff in the hotel room, I raced back out.

We had finished work a bit early today, so I figured this was one of my only chances to get to see the sights that close earlier. I metroed to Anguk station and went to the closest palace- Changdeokgung Palace. 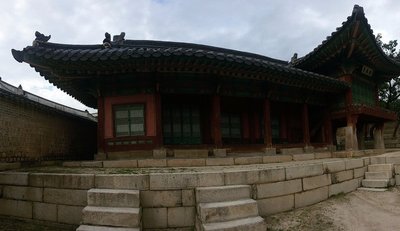 This palace is a UNESCO world heritage sight, and I think it deserves that. It's from the Joseon Dynasty, and there are a few signs around (English, Korean, +) that explain what areas were used by which royals for what. The amazing part though is the palace itself. Parts of it reminded me of Earth Kingdom from Avatar the Last Airbender. Parts of it reminded me of some of the palaces we saw in China (which obviously influenced this palace). And in an odd way, parts reminded me of the Vatican and other such over-decorated cathedrals. The style wasn't European, but the abundance of art was. Each building was covered in bright paintings. Roofs had carvings reminiscent of gargoyles. Some roofs had each and every pole terminated in an intricate carving. Really, just look at the pictures. It was beautiful. 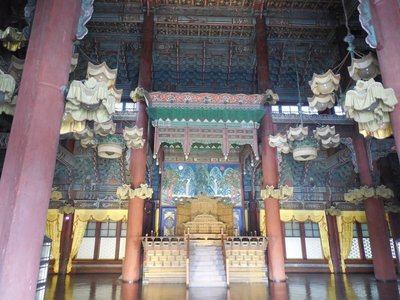 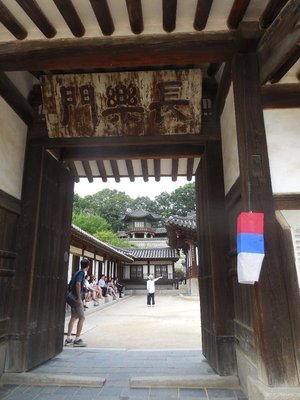 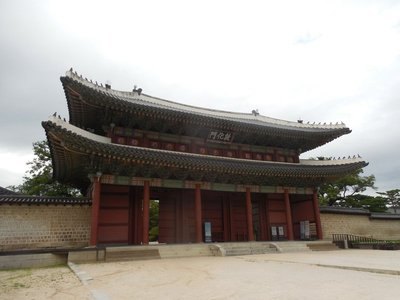 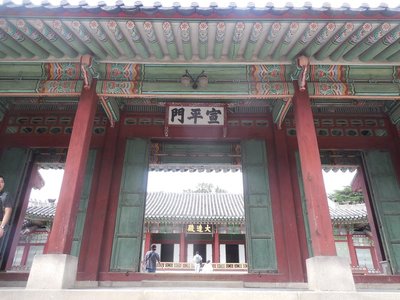 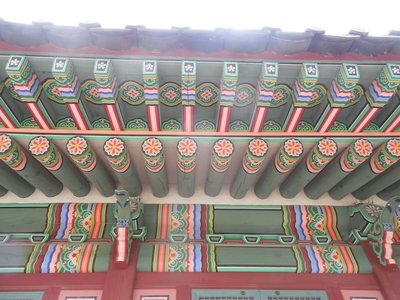 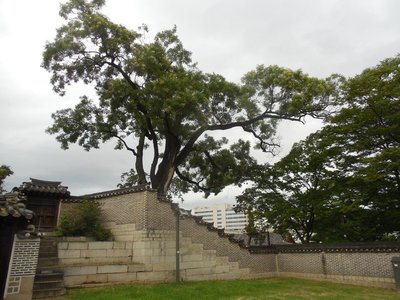 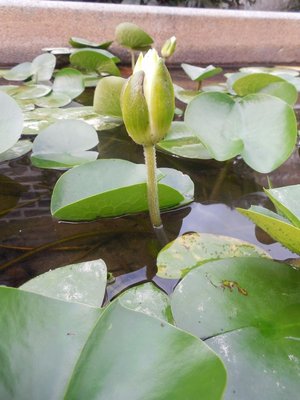 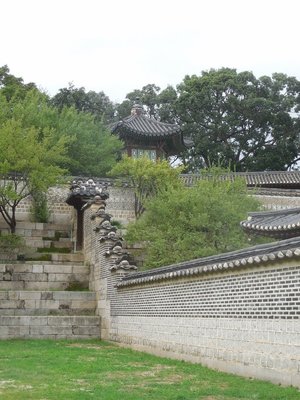 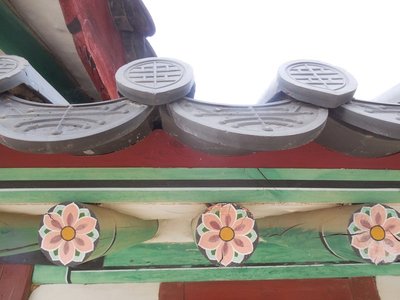 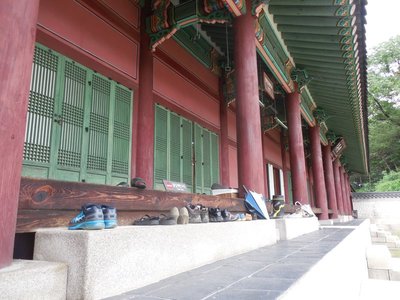 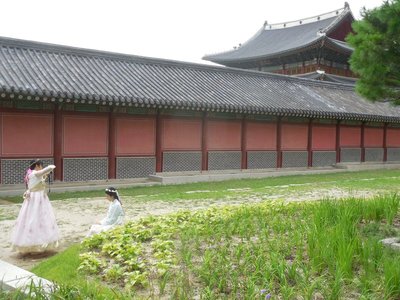 I stayed until closing time, when started kicking everybody out with some nice music.

Several other sights that closed later were high on my list and in the area, so I made my way through Insadong towards them.

Insadong is a great little artist street. Tons of tiny shops sell a wide variety of crafts- from hand-made paper cards, intracately decorated cloths, and hand-painted dishes, to huge antique stone statues. Walking down the street was sort of like walking through a free art museum. 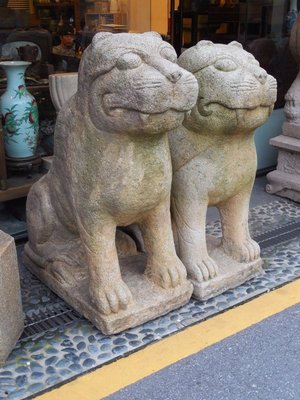 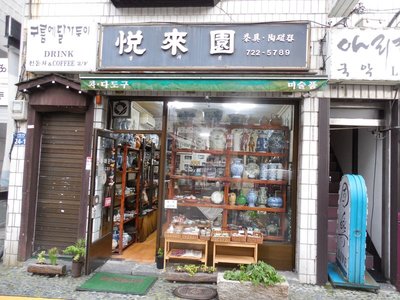 And then I got to the mall containing Poopoo Land. The mall continued in the art theme- the stairweels are called "galleries" because they contain a bunch of artistic pictures of models in funky "clothes." (Reminded me more of the wearable art fashion shows.) The other stores have lots of bright, unique goods.

But Poopoo land is different. I thought it would be juvenile fun, but I have to say don't waste your money on it. It's more or less a carnival funhouse- a room with a funky floor, places you have to crawl, a dark room to feel your way though, a room of balls to work around, and a big slide at the end. On the way, there are stairs that make fart noises when you step on them, a few scenes where you can take toilet-themed pictures (sitting on the royal chamber pot, or your head in a urinal, for example), and a few plastic butts to touch so they make noise. But, the butts were a fraction of the exhibit. If you have kids and somehow get a half-price coupon, it might be worth the 10 minutes. Otherwise, even if you're a poop/fart/butt fan, I can't recommend it. 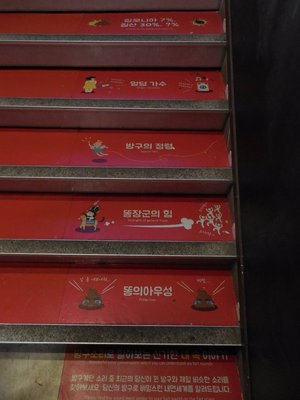 Fortunately, Poopoo Land is near the temple.

The Jogyesa Temple is beautiful. The gardens surrounding it contain tons ofo huge lotus flowers. The whole scene is this island of serenity inside a bustling city. I was fortunate enough to be there when some actual praying was going on. The sound was beautiful. I loved it as much as I love mosque calls to prayer. 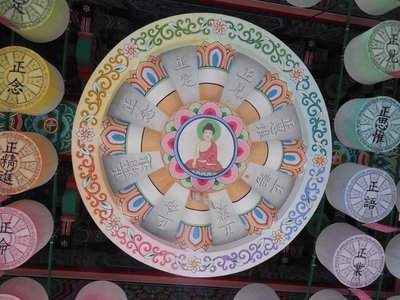 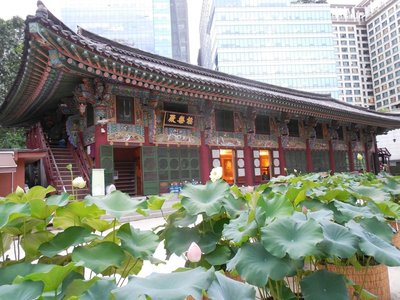 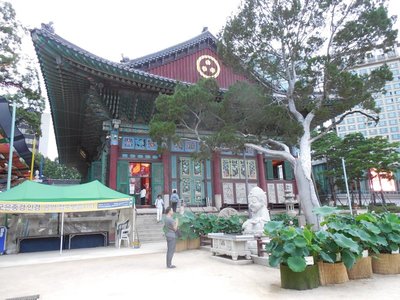 After my temple visit, I stopped at the temple stay visitors' center. This building contains 2 restaurants. I started at the 5th floor restaurant, as that one was mentioned in a guide I have. But that restaurant has a Michelin star, so it was a bit out of my price range. On the other hand, the 2nd floor restaurant was extremely well-priced. $10 got me kimchi soup with a bunch of small sides. I came away very full, and unable to finish it all.

This soup was different than Kim's kimchi soup (which will always be my reference) in that it had mushrooms and some other things in it other than just kimshee and tofu. But the taste was the same and it was delicious! My nose wasn't quite as runny afterwards as it always was after Kim's soup, but that could be due to the sides and not the spice level.

In case I hadn't mentioned it- I adore kimchi soup.

There's a good chance I'd go back to the same restaurant again and get the exact same thing.

During the walk back to the metro station, I noticed that Insadong does not shut down at night- it wakes up. The little shops were still all open, but now street vendors had lined some areas and were offering even more foods and goods.

I also grabbed some breakfast for tomorrow at a bakery. I'll let you know how it is then.