But first, a bit about Korean Air. My flight was delayed at the connection point. They gave out free meal vouchers for a 2-hour delay. That was pleasant.

The in-flight meal and entertainment weren't much, but they did have decent toothpaste and a toothbrush as well as slippers in the in-flight goodie bag.

Generally though, they were no better or worse than any other airline.

I landed and went through immigration as you would in any country. And then the luxury began.

For those who read my blog- you know that I regularly stay in $9/night (or less) hostels. I'm on a business trip, so I got a bit of an upgrade- the JW Marriott.

Somebody met me with one of those signs with my name on it. She allowed me a quick detour to the ATM, and then walked me to my driver. The car was roomy and quiet, had free bottled water and wifi, and was sparkling clean.

The drive in the rain was calm and relaxing. I tried to pay attention to all of the city skylines we were passing- Incheon to Seoul, but I was so comfy I fell asleep.

I awoke for the latter part of the journey and got a glimpse of the city near the hotel. It seems like any modern city to me.

The hotel itself is gorgeous. It's huge and grand, with all sorts of amenities. The room is very large, with a full desk area and separate sitting area. The bathroom is rather large, with both a shower (head has all sorts of different settings) and a tub. I got a free fruit tray becasue I'm staying so long. The bathroom toiletries went beyond the usual soaps, to a full sewing kit with scissors, some sort of dental kit, and a comb, among other items. For use at the hotel, there are slippers and a robe. even the desk has more than just paper and pens- it has a stapler, paper clips, and a fancy shmancy ruler.

Somebody went to a lot of trouble to thing of everything somebody might want and making it happen.

I dropped off my stuff, and immediately went out to hunt for food. It was still raining outside, but I had been told that there was a food court in the mall that adjoins the hotel.

Mall is an understatement.

This is a full labyrinth. 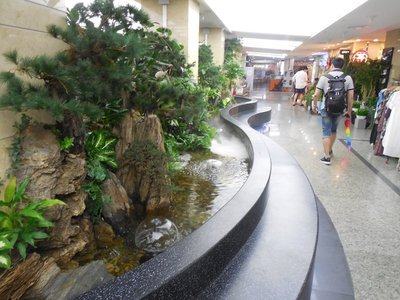 First, you pass through the ritzy stores- places that only allow one customer at a time, places where I can't even afford the free samples, places where the least expensive item in the store costs more than my typical vacation. Past those, you hit a mall with still out-of-range stores, but also a little food court that does have affordable food (other than the Dean & Deluca, or course.) I circled the food court multiple time taking it all in. I knew I didn't want Johnny Rockets, Indian, or pizza on my first night in Korea, but I couldn't decide between the rest of the choices. Partly, I just didn't know what most of the stuff was as it was only labeled in Korean. Because it's right by the hotel, I figure I can go there all the time and don't have to get everything on the first night. 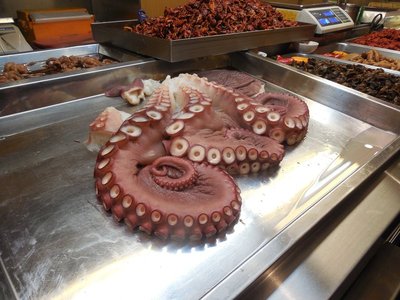 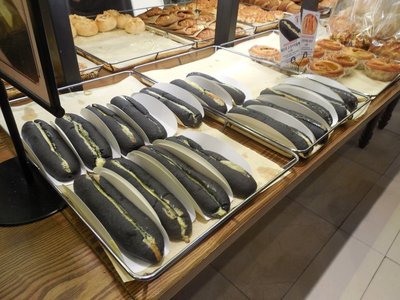 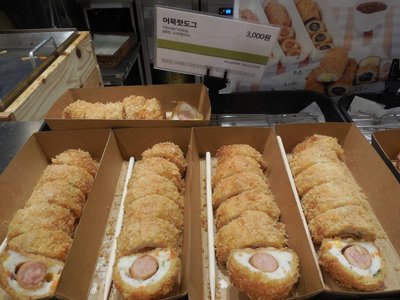 Ultimately, I got some sort of puffy potatoes on a stick (everything is better on a stick), some sort of rice dough that was filled with a substance similar to cheese whiz, and some inari sushi.

I kept walking though, becuase I wanted to see even more.

The food court somehow dropped me into some sort of underground mall that was kilometers long. The mall had tons of clothing shops, home good shops, fake flower shops, art shops, and anything else you can think of, including its own food court. It also connects to the subway station and at least a few other shopping centers. 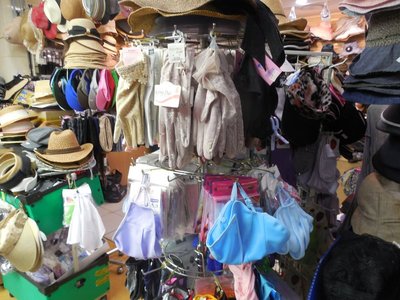 When the shopkeepers started packing up, I realized that I was wonderfully lost. I hadn't set a foot outside, but all of these underground malls connected together in one crazy labyrinth and I was not so close to the hotel. 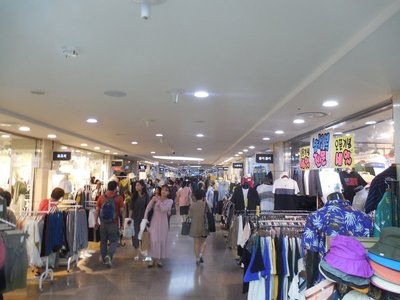 It didn't seem like much, but I had been walking around the malls for several hours. I'm not a mall person, and wasn't really looking to buy stuff (other than food), but I did find it interesting to explore a bit and people watch.

Tomorrow, hopefully the rain will stop and I'll see more of the city outside.