A day with the fishies

Now I know why hostels have curfews. In the middle of the morning, several of my roommates rolled in, playing music on their phones, rustling around, and just generally being loud. Oh well. It just made me feel a little better about my rustling early in the morning.

The soldier house breakfast is actually quite nice. They have the standard cucumbers, tomatoes, bread, hard boiled eggs, and cottage cheese, but they also had some sort of interesting pastries, a variety of nice spreads for the bread, pudding, and real cheese. I'm glad I got that option as it was very convenient and worth the money.

After breakfast, we headed out to see the various sights on our list. We were told that the aquarium is best in the morning, so we headed there first. We were also told that walking there would take 30 minutes to an hour. Hah! It took us almost an hour and a half. "Central" Eilat is no more than a mile wide, but then there is a large expanse of empty road (about 4 miles), and then the other part of Eilat. On the way, there was really nothing much to see. There is a sculpture a base that you can't see into, and lots of car import lots. The aquarium is on the far side of the other part of Eilat. Even before we got to the aquarium, we decided that we were taking the bus back.

The aquarium itself was not quite worth the price for anybody who can snorkel. True, we got to see them feed sharks, which we (thankfully) didn't get to see while snorkeling. Also, the turtles and manta rays were neat. The rest of the tanks mostly contained fish that were swimming around in the wild though (except for the Amazon display, which seemed a bit out of place). Also, the underwater observatory gave a deeper view of the fish, but it wasn't really that much better than snorkeling. The observatory did have a great view of the sea, Jordan, and Eilat from the top, so if you're into views, that is worth going up.

We finished with the aquarium park right about noon, so we decided to find someplace indoors for lunch to stay out of the sun and heat in the middle of the day and avoid getting burnt and dehydrated. We ended up eating shakshuka at a beach bar restaurant at Coral Beach Reserve. It was beach bar quality food, but it served its purpose.

After a quick nap on the beach (in the shade), we sunscreened up, rented snorkeling gear, and took off towards the aquarium. We ended up snorkeling for almost 2 hours because the scenery was amazing. We swam right next to the underwater conservation park, which meant right next to a solid coral reef. We saw sea urchins, fish with all of the colors of the rainbow, long fish, and tiny fish. We saw brain coral, corals in every hue of the rainbow, and coral straight out of a movie. We swam in the middle of a school of zebra fish and in a school of tiny little silver fish. This is how I learned that fish have fabulous reaction time- despite being all around me and no more than 4 inches from my hand, whenever I jerked out my hand to pet one, they would all scatter so quickly I had no chance. The experience was fabulous. If you ever have the opportunity to snorkel that area, I highly recommend it.

After snorkeling, we sat on the beach for a while, enjoying a quick snack and some rehydration. We did have to move tables several times because the smoke was out of hand. There were a couple of ladies who lit a new one whenever the old one was done and probably went through a pack every half hour. It's sad that everybody smokes so excessively, not just for their own health, but also for the health of the beach. The sand was completely littered with cigarette butts, despite ashtrays being available. In any case, we finished up and decided to head back to town, but not by using our feet. We were going to wait for the bus, but we also wanted to see how much a taxi would be in case the bus didn't come for a while. Somehow, in the process of asking a random girl how much her taxi would cost (28-30 shekels), we ended up in it, sharing it with her and paid less than that, which was almost a wash with what the bus would have cost for 3 people, and got us back much sooner.

After climbing the hill to our hotel, we were exhausted. We had spent most of the day in the sun, in the salt, and either walking or swimming. I showered and passed out, barely noticing when the last of the girls who had been staying in my room left. At some point much later, I awoke because my phone was ringing and I had been waiting for the couple I was with to call to wake me for dinner. It wasn't them, but I figured I'd get up and go downstairs anyway.

When the other couple woke up, we decided that we need to find food as close as possible and as quickly as possible as we were all almost ready for bed. As I went upstairs to get my stuff, I ended up meeting my new roommate and inviting her along. That worked out well, as we ordered pizza, and I'm confident that she was able to order it in half the time we were. The pizza arrived, and again, I'm glad I invited her. I would have just devoured it as-is, but she encouraged me to try the packet of spice mix that came with it. I'm not sure what was in there, but sprinkling them on did make the pizza much tastier. As we ate, we chatted. She seems like a very nice person.

As they were headed off to Ein Gedi tomorrow, I sadly said goodbye to my travel buddies. They will be up early, and I have no intentions of getting up earlier than I have to in order to grab a quick breakfast and check out of the soldier house. For now, I'm going to go pass out. 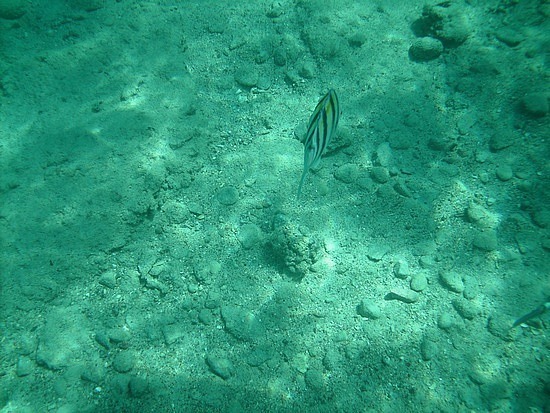