Today, I was planning on getting up early and running, but I wasn't quite sure how early as I was running short on sleep. I ended up waking to the sound of my aunt calling my sister for breakfast at 9. So, there was no running. I went down to eat hotel breakfast with them. The hotel had quite the buffet. There were omelets, cereals, and fruits for people who like that kind of food, and bread, veggies, cheeses, and pasta for those of us who like that kind of food.

After my excitingly hearty breakfast, I set out upon my 2 missions. 1- I had to go do my laundry as Irene forced me to pack some dirty clothes. 2- I had to go find a gift bag and greeting card as I didn't bring those things to Israel. The guy at the front desk of the hotel had given me directions last night on how to get to a shopping area that supposedly had 2 places I could do my laundry. I grabbed a bag of dirty clothes and headed that way. The shopping center actually wasn't that far. It was a pleasant walk to get there and the sidewalks were very well kept up. The challenge came once I got there. All I had to go on was “there are 2 places in the shopping area,” nothing more specific. Because I didn't want to wander the (very large) shopping area, hoping that the sign would be in English, I tried asking some people. A lot of the the people didn't know English. The first guy I found that spoke English was new to the area and only knew of laundromats near the University. Eventually, somebody sent me over to a dry cleaners. Unfortunately, she wanted 60 shekels (about $18) to do my laundry. That's a lot of money for a small load. I really didn't want to pay that much, so I started on the second mission and figured I'd ask about the first in the various stores. Based on the responses I got, it sounded like the dry cleaners was my only choice to get the laundry done today. I dropped it off and she promised me it would be done at 3:00. I left, dismayed that I was getting ripped off and didn't have a choice, but glad just to be done with my mission. In retrospect, I'm pretty sure I was supposed to negotiate, but at this point, I didn't even care. It was extremely hot outside, but all of the stores were air conditioned, so I started checking out the stores for my gift bag and card. The pharmacy and big, Costco-style grocery store didn't have them. The toy store didn't have them. Ultimately, I was getting thirsty, so I asked somebody, who suggested the Office Depot. I'm not big into shopping at stores we have in the US while I'm in other countries, but the novelty of wandering semi-aimlessly through stores had worn off. To my surprise, Office Depot not only had a gift card, but had wrapping paper, too. With my mission completed, I hightailed it back to the hotel to get some water and a much-needed nap. By the time I got back, I was so parched, I was gulping water as fast as I could. While the dry heat minimizes the feeling of grossness, it also left my throat extremely uncomfortably dry. I decided to remember to bring a water bottle when I go back for my laundry. After a much-needed nap, my parents and I headed back out to the shopping center to get food and also pick up my laundry. By the time we were back, it was time to get ready for the wedding.

The wedding was held on a small farm outside of Be'er Sheva. The trees were lit in various colors, and there were some live horses as decoration or entertainment. The location was quite beautiful. The wedding began with “happy hour” and delicious appetizers. At some point, the power went out. Everybody took it in stride. Some people even started singing to replace the music that had stopped. The power mostly stayed on for the rest of the wedding. After the beginning reception, everybody was called to their seats and then to the chuppah to watch the ceremony. The ceremony was very nice, although I couldn't understand a lot of it as my Hebrew is pretty insufficient. Both the bride and groom were absolutely glowing. I heard somebody comment later that she had never seen a happier groom at any wedding (and she has been to many more than I have).

We returned to our seats and the food just flowed in. There was a veritable smorgasbord of salads, breads, dips, and appetizers, followed by several courses of food. I was dancing a lot, so I *only* ate 3 courses, missing at least dessert and possibly some others. It was impossible for anybody to leave there hungry AND the food was delicious. I spent most of the night dancing, as did many of the people there. The variety of modern pop, oldies, and Israeli music was great and everybody was super-friendly about dancing with everybody. There was a lot of love and happiness in the air, which is the excuse I'm going to give because at some point, one of the groom's aunts introduced herself to me by saying "Hi. You will marry my son. I will show you him." It was pointed out to me that if we were in the old country, I would have come away from the party engaged. As it were, I came away from the party exhausted, but excited and still ready to party some more. Of course, by the time we got back to the hotel, I was ready to shower and pass out. I think that's a sign of a great party. 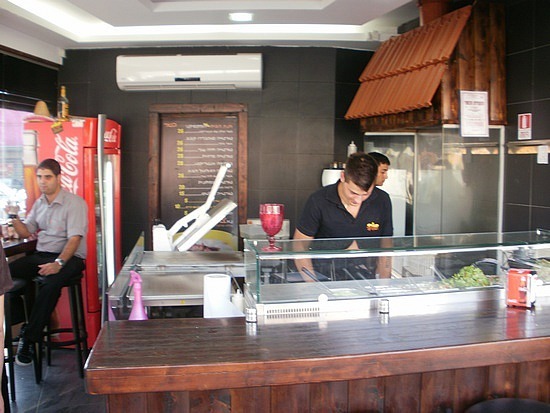