Yesterday was my first work day here. I got up, grabbed a pastry breakfast at the cafe next to the hotel entrance, and then met my ride in the lobby. We went to pick up the rental car, but they wouldn't give us the car until I had my license and the person who signs for the licenses wasn't there yet. So, we went to the police station. The police/fire/rescue station is a small building with a large parking lot and garage. We went up to the desk and were told... the person who signs for the licenses wasn't there. We “could wait 10 minutes or come back in a half hour.” While this led me to believe that the 10 minute wait would actually be 30 minutes, we waited anyway. The person I was with kept double-checking with the police station people to make sure that “the 10 minutes already started, right?” It was actually more like 5 until the guy showed up to sell me a license. Yes, that's really what it is-selling. If you have a license from anywhere else, you show it, pay, and they give you a little yellow paper with your name hand-written on it. There is no test and the license doesn't even have your picture on it. Next, we headed to the factory (unfortunately, not a pirate ship). The people there were very friendly. Everybody was more than willing to answer my questions and help out. I love the ladies at the plant! First, all of them are working in a factory wearing nice clothing. I saw the occasional jean skirt or nice t-shirt, but pretty much everybody from the boss to the lady that sweeps the floor were dressed like they had someplace nice to go. Second, they are most certainly not Barbie-brainwashed. The women are curvaceous and aren't trying to hide it and seem super-tiny. They are confident and proud, but not in a bad attitude type of way (in general). Third, all of them (and the guys too), were very honest (candor!) about what they did vs. what they were supposed to do. Fourth, they were all very friendly. Finally, one of them said to me, “you have an African woman's body,” which I take to mean “baby got back!” She cracks me up! I definitely was amused my first day in the factory, and very interested to learn more, not just from a technical perspective, but a cultural one as well. After work, I was shown two of the three major grocery stores on the island. First, we went to the Best Buy. It had a lot of items I was used to seeing in a store- including Silk and Morningstar Farms, which eased any concerns I may have had about eating on the island. The prices were a bit high (some items more than double what they'd be in the states), but that's what happens when you import. The only disappointing thing was that I could pretty much recognize all of the fruits and veggies in the produce section. The most “different” item there was that they called chayote “christophene.” Next, we went to Ram's. This was much bigger, but still only had fruits and veggies that I recognized. It did have a much larger freezer section and international section, so if I need frozen Indian food, I know where to go.

Finally, I learned the route back to the hotel. It was raining, so I cooked and spent my evening finishing up work on my computer. But, at least I did all that with the balcony door open so I was still enjoying the warm temperature.

I got up this morning with plenty of time to get to work, even if I got a little lost. Not if I got very lost. I knew I needed to turn at the Central Bank, but I hadn't see it from the side before the turn, just after, so I missed it. I ended up in town, which wasn't a big deal. There were 2 places on my list of things to check out, and I passed both of them, so in theory, I can find them again. I started asking locals how to get to the Central Bank. They all gave me different directions. One would say, go up this road and turn right. After I'd do that, somebody would say to go back the direction I came. Or, they would tell me to stay straight on a road, but it would dead-end. Or, they would say to make an illegal turn on a one-way street. In any case, I ended up calling work and getting directions from somebody. Eventually, I rolled in. Work was going pretty good, when all of the sudden, the power went out. It was only a few seconds before the generator kicked in. It was loud. I was very thankful when it turned itself off. Apparently, this is pretty common though. The lines knew just what to do and took it in stride. After work, I decided to explore a little. The more I explore, the less lost I will be and I will be better able to recover from wrong turns in the future. I got gas for the car (cash only, attendant only) and stopped by the IGA (the third major grocery store on the island). Why are we not surprised that my exploring first led to a food place? Like the other grocery stores, the IGA was very overpriced as most of the food was imported. At least they had starfruit (carambola) and a local hot sauce that I bought for reasonable prices because they were from the island. Also, they had my kind of Skippy, so I got some as I am a Skippy addict. I picked up some bread and guava jelly to go with it (because guava was the cheapest jelly and it seemed more appropriate for the tropics.) The one thing I was a little upset about is that they didn't have cumin either! Cumin is a staple in Indian, middle eastern, Mexican and other foods. At home, I buy it in bulk. Here, you apparently just can't get it. [Update: it is findable on the island, you just have to know where to look.] Grrrr. I had gotten a lot of produce to make Moroccan stew, but now I was going to have to rethink my meal. (I ended up going Chinese with some of the ingredients and using others for other things.) One more thing about the produce- at the checkout, I finally realized why all of the produce in all of the stores was wrapped in plastic- even in the stores, there are bugs everywhere!

Next, I decided to drive some of the ring road that goes all around the island so I could see the mountains that remind me of Pirates up close. It's a very pretty drive right around sunset, but at some point I realized that my headlights didn't work so hot and I was going to have to drive back with my brights on. Even with them, I was going slow enough to get regularly passed on the winding mountain roads where people were walking on the side. I didn't mind, I was just concerned for the other drivers and people because it didn't seem too safe in some places.

The drive was also interesting from an auditory point of view. The radio station I had on was whatever the last driver had it set to. Either it kept changing towers as I went on different sides of the mountain, or I was listening to a bizarre station. There were reggae songs about staying on your side of the road and eliminating the stigma associated with depression, there were a bunch of latin songs, Love Shack by the B52s, and some countryesqe song about Christmas. Then, I started hearing this odd squeaking noise. At first, I thought it was the car because the roads are so potholey. Nope. I'm pretty sure it's the monkeys. (Later, I found out that it's just really loud crickets.) Away from the mountains, you can't hear them so much, but when you're right in them, they're pretty loud. Eventually, I made it back to the hotel, where I promptly tried my PB and guava J sandwich. It was pretty good. It was also way too early to settle for the night, so I went exploring around the hotel area. There was nobody at the hotel bar or pool tables, and only a couple of people at the gym. Just past the gym, I scored! Beach! It was too dark to really go for a walk on the beach, but I did sit at the edge of the light and watch the waves roll in and then watch them roll away again. The stars were also a beautiful sight. There were so many and they were so bright. I was proud of myself for identifying the little dipper, which I can't often do (especially where I can't see stars). The serenity was nice, but I was relaxed in about 2 minutes and got bored after a few more. According to the guy at the gym, nobody is really out at this time. Everybody has just done their exercise and is eating/showering before they go out. At 10. With work tomorrow, starting to go out at 10 may not be the most responsible decision. Usually, I wouldn't let that bother me, but I really do need to keep my wits about me there. I read by the pool for a while and turned in. 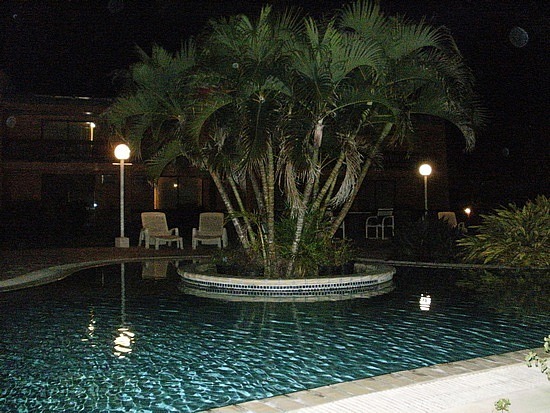 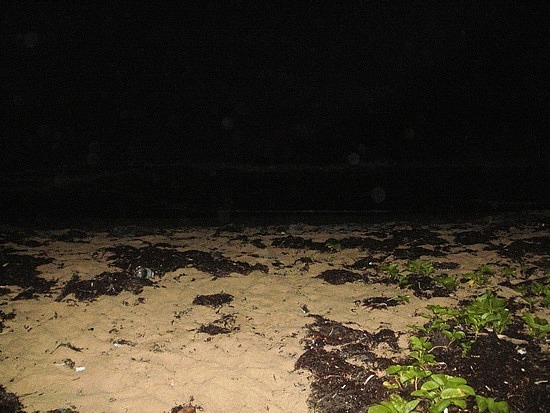