Weekend at the hotel and discourse on the water

The weekend was very relaxing. I spent it mostly at the hotel because some plans fell through, but it was nice to catch up on some projects that I had started 3 months ago. For food, I took a walk to a local convenience store and picked up essentials like tortillas and cheese. I'm noticing that the cheese here is very unexciting and bland- probably because they need it to cool down the spicy peppers it is always eaten with. I went for a swim at the pool because it was very hot. It felt like 90 to me. Apparently, it was 110. However, it is so dry here that 110 is not actually unbearable.

Monday was back to work. At work, water was a hot topic. The weekend was very hot, and since the water is only on for a few hours each day, a couple of my colleagues ran out of water over the weekend. I was amazed that the water is only on for a few hours, but the explained that because it's so dry here, the water is in short supply. You fill up your basin when the water is on, and then use it until the water comes on to fill your basin again. I guess it works here. My engineering brain says that if the water is on all day, but people still use it like they do now, it is going to still be the same volume of water taken from the reserve, just not stored in individual tanks. I don't really see why they can't just do that, but clearly there's something cultural here that I'm missing. After work, we went on a treasure hunt to try to find me a tortilla press so that I could make tortillas at home. It seemed that all of the little shops were closed by the time we got there, so we started trying chain stores. I don't prefer buying from chains, but if the little shops won't stay open long enough for me to buy, that's what I have to do. At the supermarket (at least it was a Mexican brand) we finally found my tortilla press. I also picked up exciting food (like chili tamarind candy) for people back home. Another cool thing about the grocery store was that there was a little marketplace in the front of it. After the cash registers, there were tables of local artists selling locally-made products. There was a lot of beaded jewelry, some candies, and plenty of woodworking. I almost got my brother another musical instrument. Afterwards, we went to the mall to get a Mexican cookbook. Most of the stores sold shoes, but other than that, it was a regular small mall- not really my cup of tea, so I got the book and got out of there.

Because elections were soon, there were political signs every 3 feet for some candidate or another. I got quite the earful in the car as to who was a %&*@#$ and who wasn't. I also got a good education on Mexican politics and the 3 main political parties (the green, blue, and yellow). As we were driving and I was learning about politics, I was told that I was going to be taken to a place with good salads for dinner (Garufa). At this point, I felt the need to ask the water question: "Isn't it unsafe for Americans to drink the water?" I also asked if the other people who visited the plant got sick. The answer was a strong "maybe." The guy I was with said that basically, the water at the factory and the water at nice restaurants is ok, even for Americans who haven't built up immunities. Those types of places have their own filtration systems. However, he won't even let his daughters who grew up here drink the water from or eat at some of the shadier places. (His daughters wouldn't have been able to have the DoriNachos from the street vendor.) He also assured me that the number of my colleagues who visited and got sick was small, and that it could just as easily have been from spicy food or regular sickness. I was still a little on the fence, as not everybody would tell that they got sick and the percentage of sick people seemed higher than normal. However, I had been having good luck with drinking the ice and eating the tomatoes at the plant, so I did decide on the salad. I'm glad I did. The goat cheese on it was coated in wood ash. I'm not sure why, but I've never had that before, so it was exciting. Also, the salad I had was great. It had no lettuce, just the rest of the veggies that would normally come with a greek salad. The dressing was possibly all acid- they didn't bother with any oil, which meant that the salad had plenty of flavor, just how I like it. I'm pretty happy I took the risk, because now I feel comfortable eating raw vegetables here, which is nice to have in my diet.

On the way home, I got to experience quite a rare treat- it rained in Chihuahua. It rained hard and there was plenty of lightning. The roads were flooded like PA roads and the drivers all had their flashers on because they were driving slow. It was actually a really neat sight to see. the whole area was nice and cool to the point where I wished I could just open my hotel room windows.

When I got up the next morning though, everything was bone dry again. That is the Chihuahua dryness. 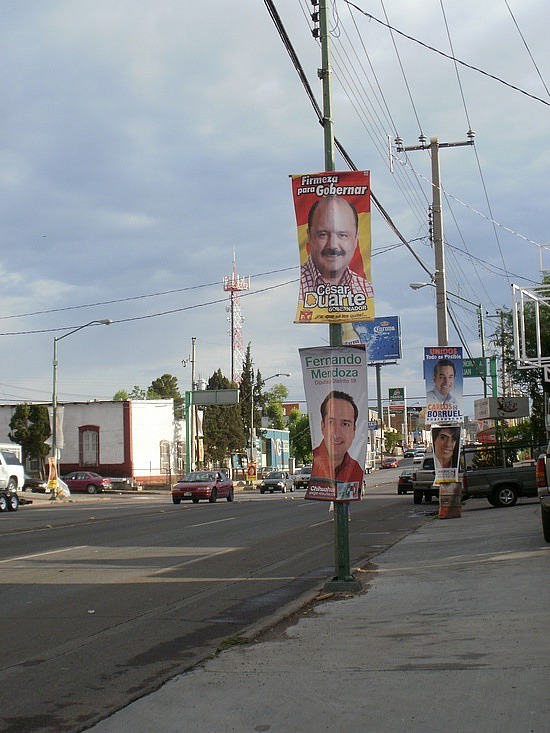 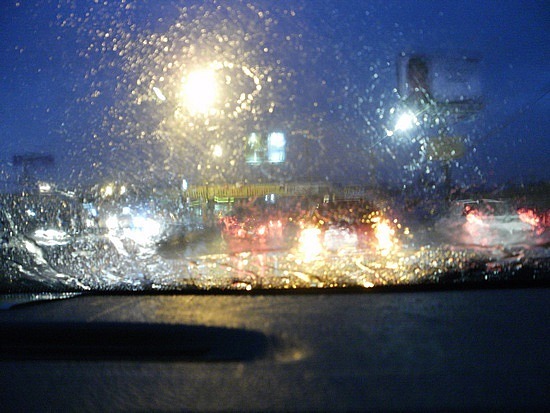