We split a cab to the airport from our hotel. The cab driver doesn't care how many people share, so we made 5 of us fit. The tab was 9 sols ($3) split 5 ways- the cheapest taxi I've ever taken. We flew to Lima and got a pretty good view of the Andes from the plane. Upon landing, we did my favorite activity- took the bus! We took the bus to Miraflores, the wealthier part of town. It was about a 45 minute ride for 2 sols (66 cents). It was just as fun as riding the bus was the other day. The novelty still hadn't quite faded for me.

In Miraflores, we walked by the shore. We saw surfers in the waters below, and hang gliders take off from the cliffs. We wanted to hang glide, but the price was high and they didn't seem to want to negotiate. That was ok as the next few guys had problems and couldn't get into the air anyway. There are several very nice parks at that end of town and we just wandered for a while, enjoying the clean air. After lunch, which featured a pisco sour, the local drink (very sour), we grabbed another bus back to our hotel. We took a quick break and were off to see the Cathedral we had missed the other day. The cathedral was a pretty standard Spanish-style cathedral. It wasn't as impressive as the one in Cusco, but it was ok. On the steps of the cathedral, we met Xonathan. He said he needed to practice his English and didn't seem shady, so we talked to him for a while. He took us to the grocery store so Jen could get food for the next week and I could get snacks to bring back to my family. We also picked up a fruit called tuna for ourselves. We went to San Martin Plaza to eat our tuna. It turns out to be a very interesting fruit. It is spiky on the outside. The next layer in tastes like a melon that is bitter. The inner layer is the tasty one, but it's all seeds. Apparently you're supposed to eat them. We mostly just made a mess. When we were done, we headed back to our hotel again.

We wanted to go to services that night, but didn't know where the shul was. We were waiting on an email, but it didn't come until after we left Lima. Instead, we went wandering for food and in search of a fountain park. The park definitely delivered. It has a Guiness Book of World Records record for the most fountains or something like that. But these were not boring fountains. The water sprayed in various shapes and was lit up with various colors. There was a water bridge to walk under and a water game to play. One of the fountains squirted to the beat of a techno song laying in the background. Once an hour, they put on a show with music and lights at the Fantasia fountain. During the show, the water danced around to the music. They played everything from Mozart to Backstreet Boys. At one point, the water was sprayed into a screen and they played a moving slide show of scenes of Peru while playing what sounded like a traditional Peruvian song. It was pretty cool. We expected to only spend a half hour or so at the park, so we had originally decided to get food after. By the time we were done though, we had spent a couple of hours watching the water and were pretty hungry. There really wasn't anything on the way back to the hotel that was open at that time, and we had seen a card at the hotel saying they would make pizza, so we figured we'd just go back and have pizza. Unfortunately, we didn't notice that on the card it says the kitchen closed at 8:30. Still, it was relatively easy to convince the person in charge to serve us breakfast that late at night. I was very pleased as they didn't have to do anything at all for us, but they were nice enough to heat up some bread, pull out the butter and jam, orange juice, and even make us coca tea.

I went to bed pleased with all I had seen and done on the trip. While I wish I could have seen more, I was ready to be able to drink from fountains and eat salads again. I left the next morning for home, not too disappointed to be going, but most certainly very happy with my visit in Peru. I highly recommend it. 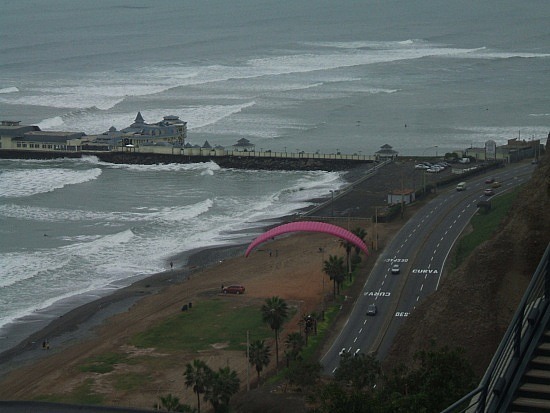 The beach at Miraflores 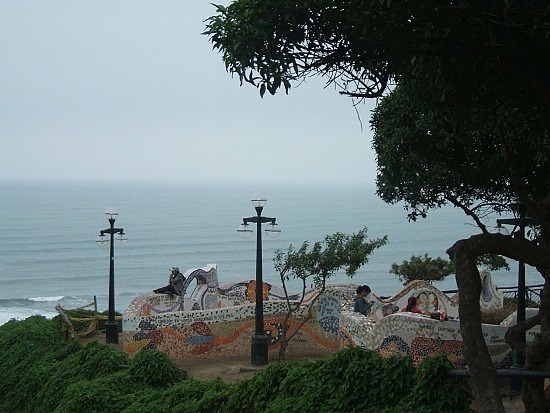 A park near Larco Mar 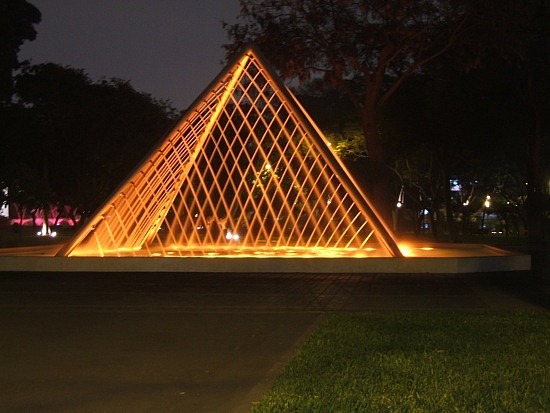 Posted by spsadventures 16:00 Archived in Peru