Breakfast was again huge, but I made it worse by adding birthday cake. After stuffing ourselves silly, we headed out towards downtown, passing everyday Cuban life on the way. At the Prado parks, artists were just setting up for the day. A tout approached us offering a classic car tour. The sign he carried said 50 CUC for an hour, but he immediately lowered the price to 35, without us even asking. Perhaps we could have negotiated him down a bit more, but we're here to support the Cuban people, the car was a gas guzzler, the tour was longer than the airport ride, and we were paying for both a driver and guide. Surely he needed the few dollars we could have saved more than we did. The tour was more of a drive, since our guide, Jorge, didn't say too much and wasn't able to answer a lot of our questions, but he did periodically interject place names or point out sights. The driver didn't speak at all. Our first stop was the revolutionary square where big speeches are made. Then, we traveled through a forested area with narrow roads, and saw some of the newer (1970s) neighborhoods. We passed the famous cemetery, but didn't stop to see the famous graves. We did stop in John Lennon park. He wasn't wearing glasses when we arrived, but some lady apologized to us and put them back. We molested him, took a few pictures with him, and continued on our way. We drove around Vedado and saw a bunch of what I saw yesterday, before taking the Malecon back to Havana Vieja. The drive was quite pleasant, and I enjoyed being in an open car. It would have been better if Jorge had been more talkative and informative, but it was still enjoyable. We returned to our original plans and viewed the capitol. It's supposed to look like the capitol building in DC, and it does. We stumbled upon a flea market. There were the usual shoes and clothing. I also saw a plumbing stand, an electrical stand, and other stands that sold Home Depot-type items more than clothes or decorations. Seriously- one guy had a display of shiny new pipe fittings. I wonder if this is how most Cubans get items to fix up their homes. We continued to Plaza Vieja through neighborhoods that looked somewhat similar to where we were staying. Suddenly, we hit a huge crowd of tourists. The shift was startling and stark. We spent the next few hours surrounded by tourists, tourist attractions, touts, and everything that goes with tourism. Much of the areas had a Disneyesque-inauthenticicity to them. I frequently felt like we were at the "Havana Resort Disneyland." Most of the plazas felt more or less the same. The uniqueness came from what we did by each. At Plaza Vieja, we took the elevator to the top of a tower to see the camera obscura. This uses an old-fashioned camera technique to provide a live image of the city on a viewing disk. The operator zoomed in and out to focus on various parts of the city. It was awesome! Plus, there's a great view from the rooftop. Next, we were pulled in by a guy with a guitar that wanted to sing to us and take pictures with us. We are aware they want tips for such things, and walked away. But he followed us and gave us a story that said the government paid him to do this. This was his job. So we politely listened for a few moments, took pictures, and tried to be on our way. Of course, at the end, he wanted money. Not just money, but $5 for about a minute of singing and pictures. Absolutely not! We did tip him, but certainly not $5. We got int the out-the-door-long line at the Chocolate Museum. Really, it's a shop/cafe with a poster about the history of chocolate on the wall (Spanish only). The prices for chocolate are the same as the states or anywhere else, don't think you're getting it cheap. But it is tasty, and they had a few flavors that are less-common to find (Guava, certain rums). Next up, we visited San Francisco Plaza. Here, a large church dominates. Out front of the church, people tug the beard or finger of a statue for good luck. (We did too, of course.) We visited the fountain that I think is supposed to be famous for something, but you can't tell from looking at it. We also visited the post office for some stamps and the cadeca to change some money. One of the buildings we passed had guards that encouraged us to step inside (free). It was pretty empty of people, so we were cautious, but it was shady and cool. I think it's some sort of tourist mall, but it has nice statues inside, and is really fancy. Also, everything was closed and there were no people. So, I still can't be exactly sure what it was.

After that break, our attention again got pulled outside to the street. Several dancers on stilts paraded by. Music accompanied them, and they put on quite a show. I was happy to put a few coins in the collection bag for them. We stopped to check out a book fair that seemed less aimed at tourists and more aimed at Cubans. We saw Plaza de Armas, which wasn't so different. I got myself a fresh coconut to drink the juice from. Unfortunately, I took it to go, so when I was done with the juice, I didn't have anybody around to break it open so that I could scrape out the flesh. I got a bit with the straw, but not enough.

Finally, we made it up to El Castillo de Real Fuerza. Inside the typical Caribbean fort, we visited a Cuban history museum that showed us a lot about the naval history of Cuba. Some displays were English, but some were Spanish-only. It is an interesting diversion, and only really worth it because it's not too expensive.

By this time, we were hungry. While we would have been happiest sitting at a restaurant that was not a tourist trap, that didn't seem to exist in this part of town. We chose a restaurant with outdoor seating, and made sure to sit the area closest to the band. The band was actually quite good- I bought a CD from them at the end. But the dancers were the most entertaining part. Some Cubans would just be passing by, and start dancing to the music. It's as if the music were part of a street party. These are not professional dancers, although I'm sure they would have happily taken tips. They were just people looking to have a good time and salsa with random people off the street. The food itself was nothing special. I specifically asked if they had plantains when we ordered, and was assured yes. They never came out and I didn't get an explanation, so I asked. The waitress said somebody else got the last portion I was saddened by this, but also a bit annoyed that she didn't bother to tell me, she just didn't bring them. I know running out of ingredients is typical Caribbean, but usually they at least tell you when they're out elsewhere. I hope this isn't regular Cuban service.

Our last plaza was Plaza de Catedral. Of course, this one featured a Cathedral. It also featured a restaurant where they were filming something. I couldn't really get close enough to tell whether it was for Cuban tv or something foreign, because the film crews were set up and blocking the area off. Nearby, we saw one of the 2 famous Hemingway bars- La Bodeguita del Medio. It's really not much to see in the middle of the day. While I read some Hemingway in preparation for this trip, I'm not his biggest fan, so it didn't really get me excited the way some people got excited. We were surprised at how quickly we saw the things on our list for today. So, we decided to start in on the list for Wednesday. With the help of the Cuban people, we figured out how to take a guagua bus (public transport) across the tunnel to the other side. From the bus stop, it's still a nice walk up to the castle. We took the tour with the guide, and it was worth it. The castle isn't really marked for a self-guided visit. The guide shared stories with us that made the castle come to life a bit more. She also directed us to the return ferry. We walked past some sort of military equipment on display in an outdoor museum-like setting. We walked to the huge statue of Jesus next to Che's house. Then, we walked down the hill, with a stop at a peso churros stand on the way. The ferry is the public transportation that the locals use to cross. Its 20 moneda nacional, or 1 CUC, if that's all you have. The boat arrives to the dock, people load on, dropping their coin into the hands of the conductor, and the boat leaves when it's fully packed. It's only a few minutes to cross the river, and then it unloads a bit south of the cruise ship terminal- very efficient. As we had done quite a bit of walking, we decided to take a bicitaxi to the central area. As of now, I have used modern-vehicle taxi (from the airport yesterday), classic car taxi (tour this morning), guagua bus, ferry, and bicitaxi. The only thing I've seen and not used are tuktuks and horse rides, but those are much harder to find. For dinner, we stopped at Ana's buffet on the Malecon. The choices were extensive, and I felt that we were able to do it justice, what with all the walking we did today. I enjoyed the fried plantains immensely. If you're looking to try a little bit of each of the traditional Cuban foods, this would be a good place. 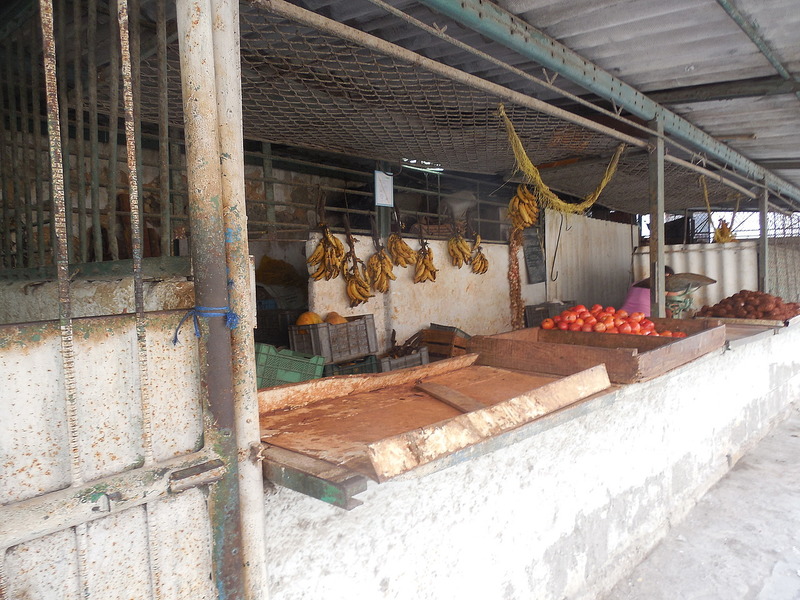 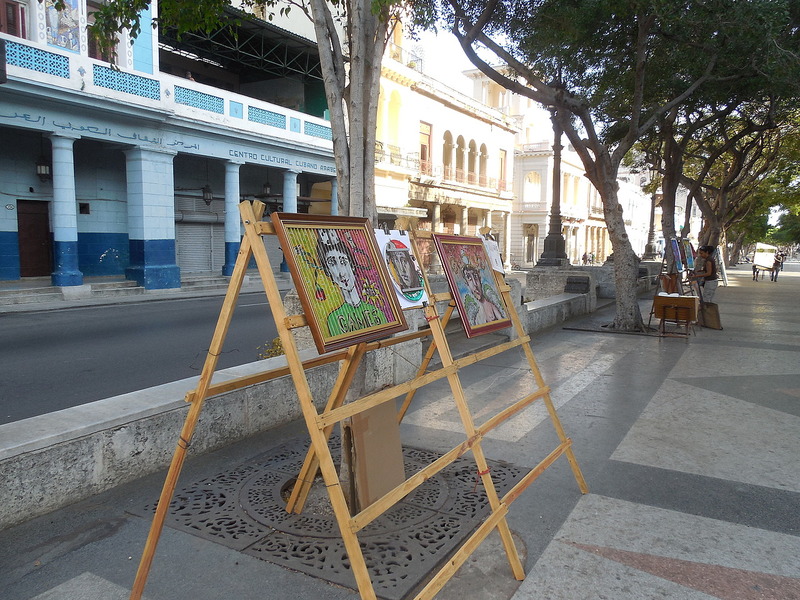 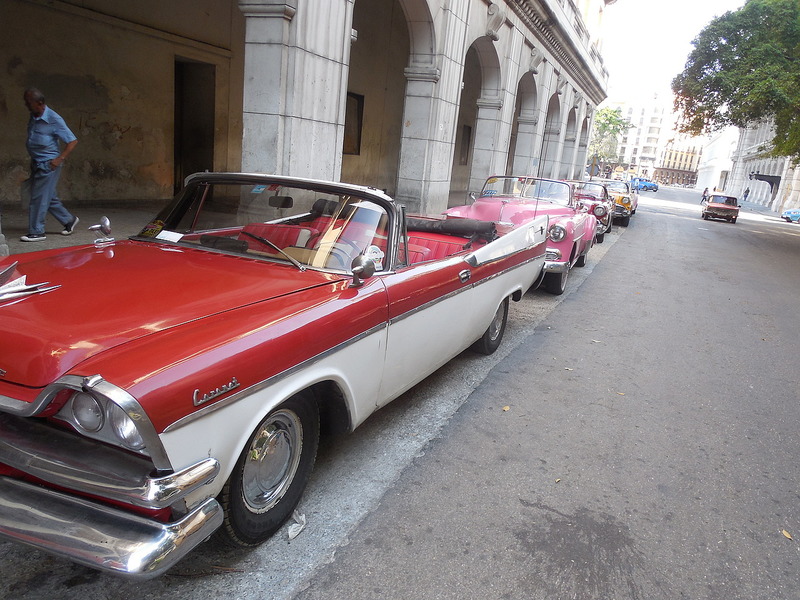 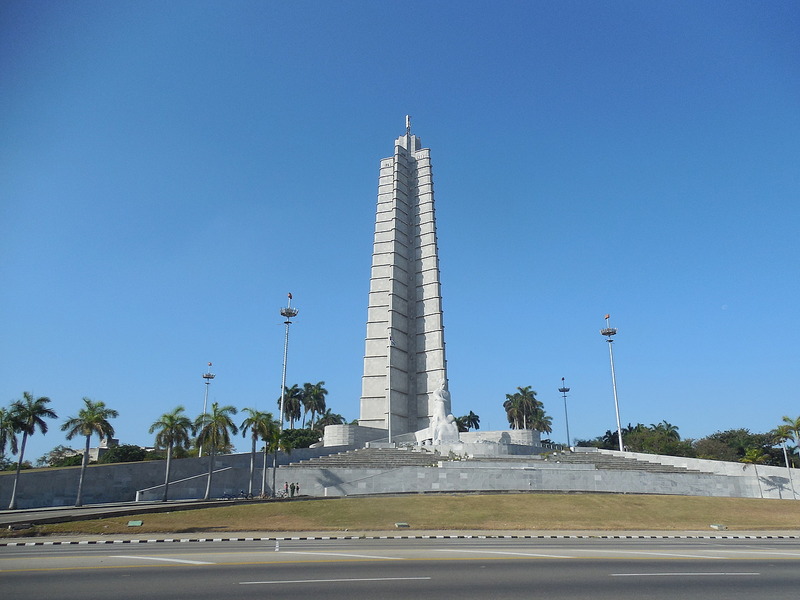 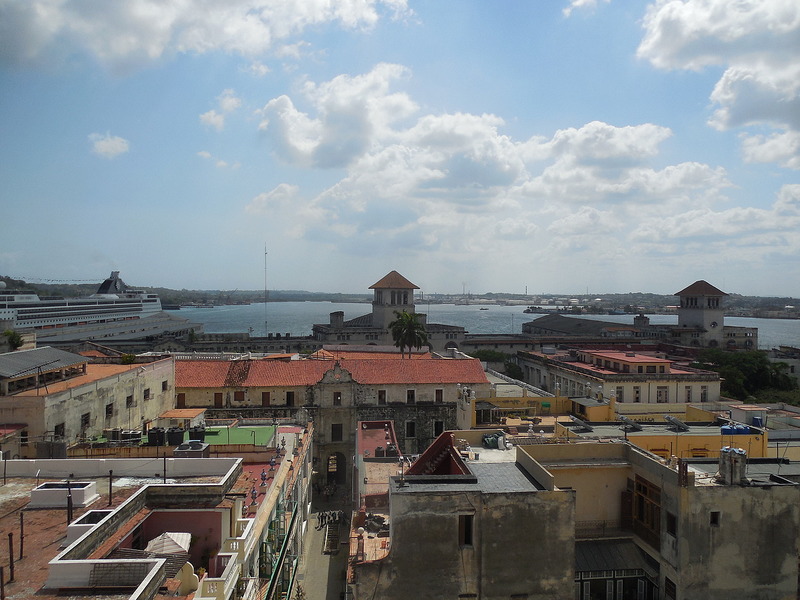 View from top of Camera Oscura 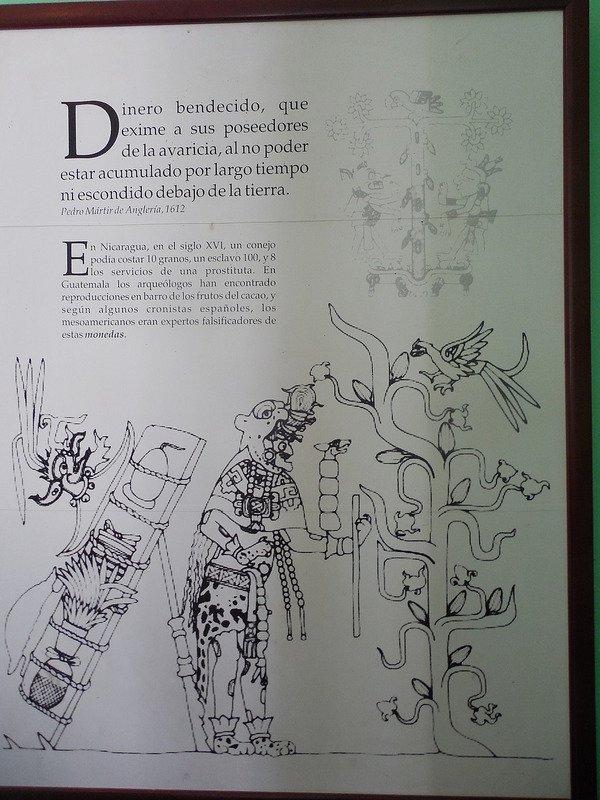 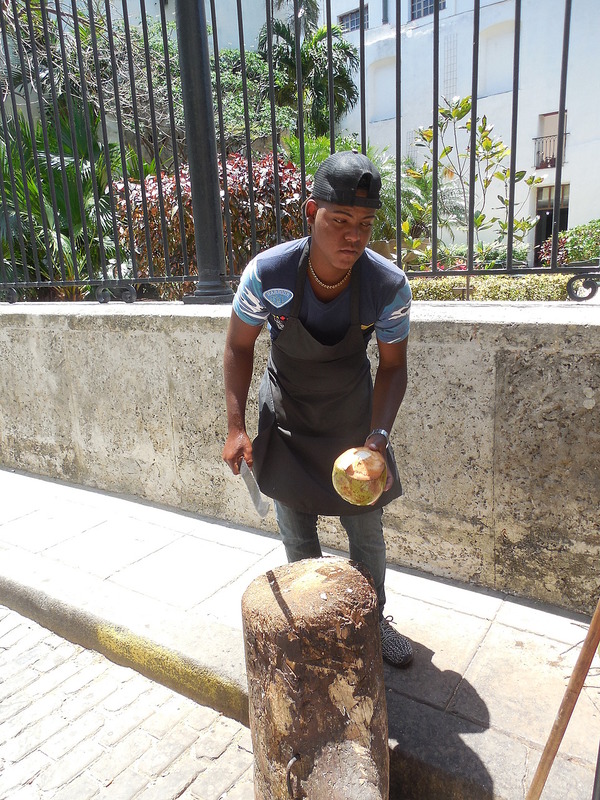 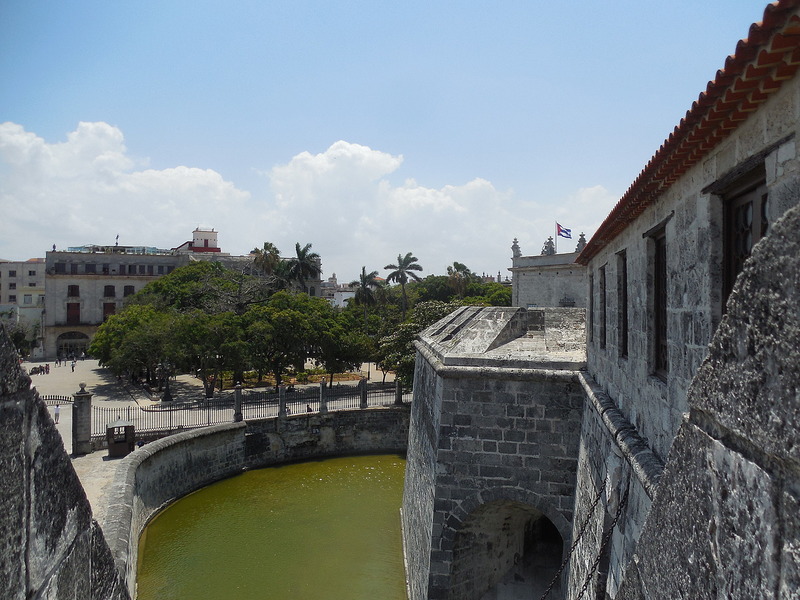 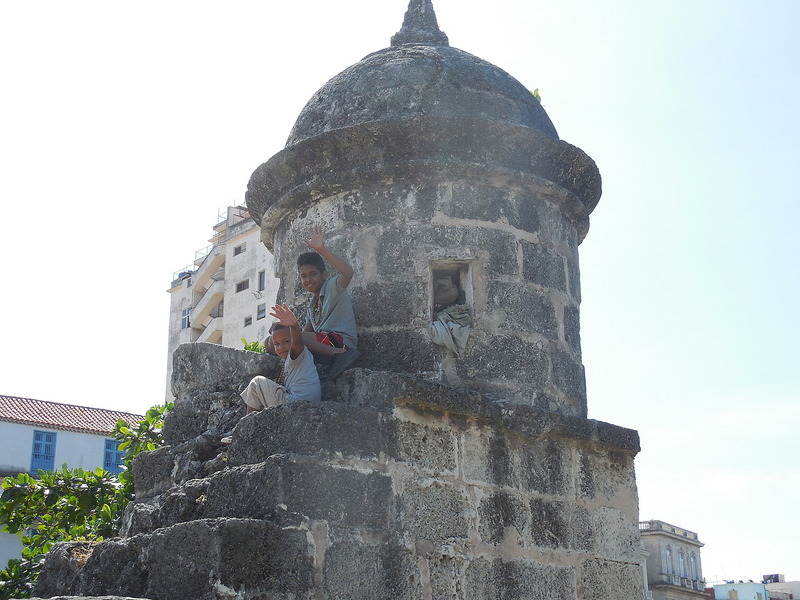 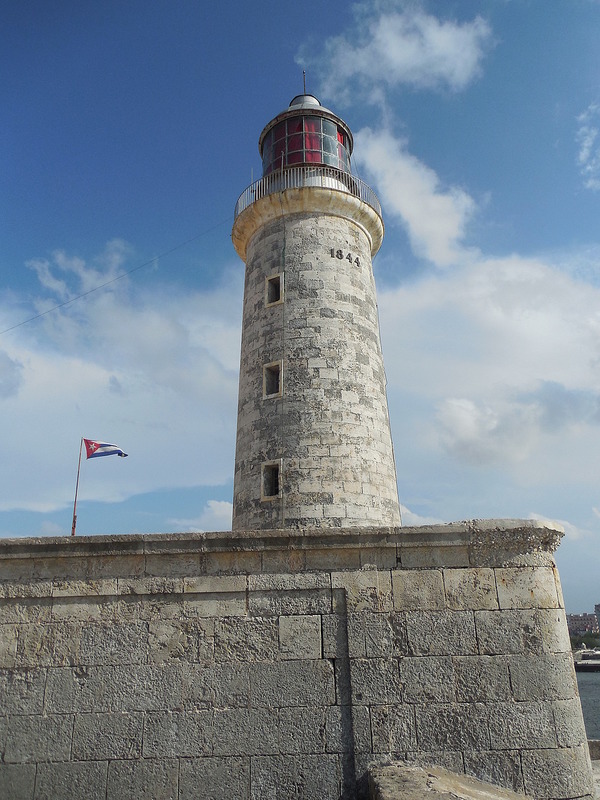 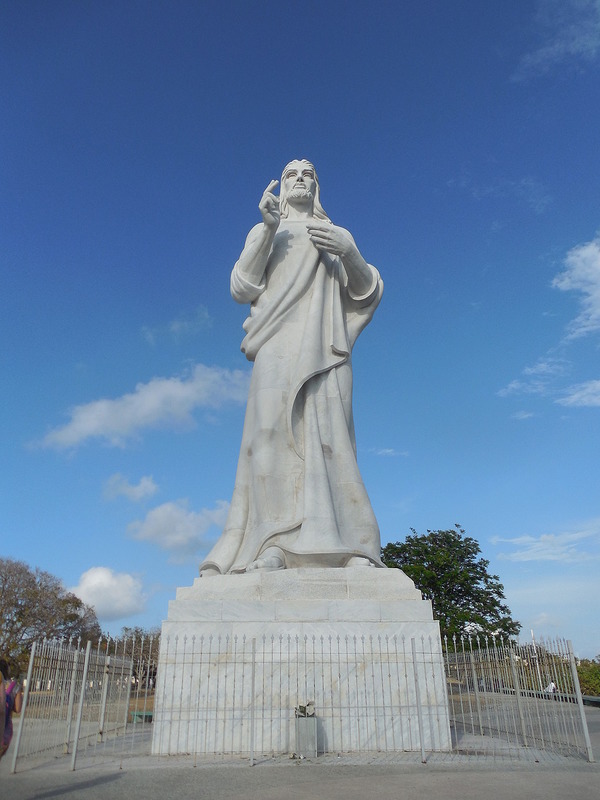 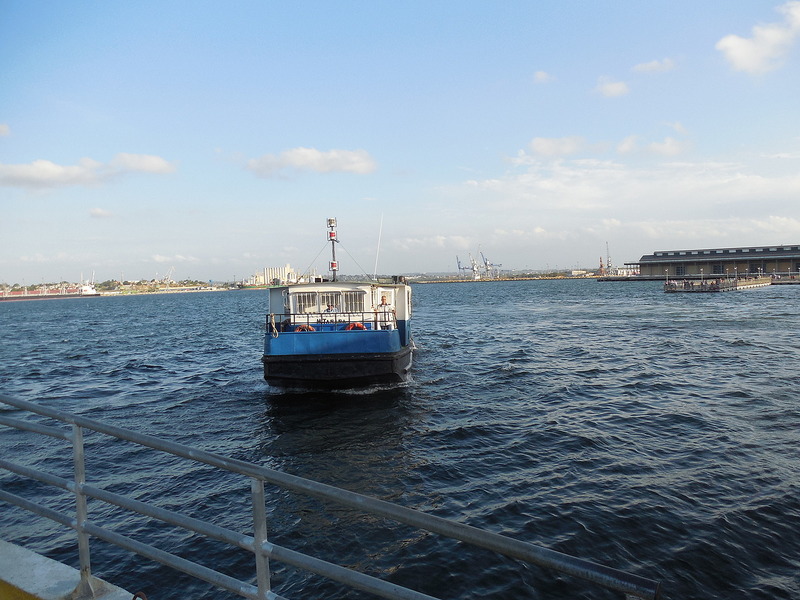