I did a little last minute souvenir shopping in Palm Cove and then we were off to the airport. The flight was forgettable, which is a good thing. However, we were pretty hungry by the time we landed. We asked the driver if there were any places to eat that were still open. His response was "only the American fast food restaurants." He then proceeded to show us the Burger King, McDonalds, Denny's etc. Meanwhile, we were passing sushi places, Chinese food, and other local restaurants, but he was mostly ignoring them unless I was pointing them out. I'm sorry, but I can get American food at home. I'm here to experience New Zealand and to support the local economy, and not to spread McImperialism. We ended up going to Sky City. The Auckland tall tower has a casino called Sky City in the base of it. As the casino is all night, of course the food is there as well. As I was finishing up my noodle stir-fry, I happened to glance up towards the dessert menu. I almost jumped out of my skin with elation. They had Pavlova! The only thing I really knew about Pavlova was that it was the Australian dessert the way apple pie is American. I had seen an adaptation once on the show Top Chef, but didn't really know what it was. It was the one food I had wanted to have on this trip, but I hadn't seen it on any menus yet. I had pretty much given up on getting to try it as we had left Australia, and I had been bummed about that. Despite the fact that it was fast food in a casino in New Zealand, I just had to get it. Boy was it good. The bottom was some sort of merengue cake that was much softer than most of the merengues I'm used to. On top of that, there was some sort of tangy fruit (maybe passionfruit?) syrup. On top of that was whipped cream. I was definitely impressed. This is going to be the food that I try to find a recipe for so that I can recreate when I get home. I headed back to the hotel, but Rachel, Mike and mom stayed to gamble. I suppose if you're into that sort of thing it would be something to do, but I prefer my money in my own pocket and I was really tired. Tomorrow: Glow worm caves 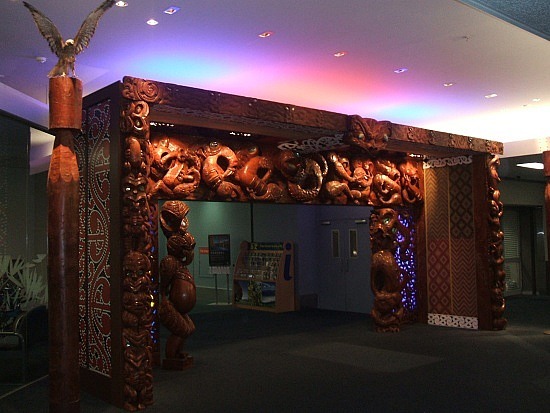