I got up this morning and promptly headed out to forage for breakfast. On the way, I saw this amazing Buddhist church/temple/monastery/something. It was right in the middle of the city, but when you stepped inside the grounds, you felt calm, serene, and not like you were in a city at all. I continued on until I found a place with a long line of locals waiting for food. I said "I'll have what they're having" and ended up with a plate full of rice and unidentifiable food. One item was something pickley and spicy- sort of like kimchi. One item was dahl of some sort. One item was pink, and also spicy. The other patrons watched the "white girl struggles to eat with her fingers" show for a while, and then one offered to find me a spoon. I declined and continued amusing them. Scoop, lean forward so as to not drop it all on the floor, place mostly in mouth, chew, swallow, wipe runny nose caused by spicy food, put food into another pile, and repeat. It may have taken me twice as long to finish my meal, but I was in no rush. I paid 100 rupees (about $1.5) for the meal + a bottled drink, and was on my way, having clowned miles onto the faces of strangers. I continued walking around town (Wellawatta area) just to see what there was to see. The city is not that different from cities elsewhere- it's full of people walking, waiting for buses, or grabbing cabs. (But here, cabs aren't yellow and they come in tuk tuk form.) The streets are lined with shops, apartment buildings, and more shops. Actually, the streets are much cleaner than cities like New York. There's not a lot of trash on the ground, no icky smell, and not a whole lot of bums. The city feels a bit dirty because of all of the pollution, but otherwise, is not that bad. It certainly feels much more modern than many other cities, and certainly doesn't feel third-world. One of the few things keeping it from feeling like nay other city was the lack of diversity. I stuck out like a sore thumb. I had to reconfirm to every tuktuk driver who wanted to take advantage of the tourist (basically all of them) that I didn't want a ride. I crossed over to the sidewalk by the beach, and there was one driver that struggled so much with the concept that I was out for a walk, and hence riding would defeat the purpose, so much that I had to head in the other direction to get rid of him, but otherwise they just went on their merry ways. At some point, I crossed the train tracks and went barefoot in the sand. I waded into the Indian Ocean a bit, and then got a sudden wet reminder that wave heights vary. Since I was wearing pants I was planning on wearing to a nice luncheon, I decided that going back to the hotel to wash the ocean smell out of them and let me dry was a good idea. But of course, I passed a grocery store on the way and had to duck in. A lot of the items for sale were pretty standard, but there were a bunch of interesting fruits. Also, the toothpaste came in some odd flavors like clove and aloe vera. Finally, I made it back to the hotel for a quick nap and cleanup before heading to the luncheon.

The luncheon was the Saturday buffet at Mt. Lavinia hotel- one of the fanciest hotels around. The view of the city was amazing. The view of the beach was amazing. And despite the fact that we were still in the city, we couldn't hear a drop of all the ruckus. The only sounds were the wind, ocean, and chatter from the kids playing in the pool. The food there was pretty great too, especially the dessert table. There were a variety of foods, and they were all well cooked, with lots of flavor, but not really hot-spicy. A jackfruit curry was one of my favorites, and the cheesecake was my favorite dessert. Also, I really enjoyed the honey lime pumpkin, the makani cauliflower, the ghee rice, and about everything else I ate. After lunch, we went for a walk around town. We mostly just took in a lot of the hustle and bustle while we chatted, but we did hit a few of the standard tourist sites. Galle Face Green is mostly brown now, but it was full of people enjoying the breeze. Tons of kites were high above, and we considered buying one, until we saw that there was no challenge to kite flying here. One vendor had 3 tied to a pole. If it's so easy a pole can do it, where's the fun? I did find the food vendors fun. A lot of them had these shrimp patties with a whole shrimp just plastered to the front. Even the bags of prepackaged snacks looked fun as they weren't limited to chips and such. Unfortunately, I ate waaaaaaaay too much at lunch and couldn't even think of eating so soon after. We saw the clock tower, which is cool because you can see where the lighthouse light used to be at the top, and then we wandered around a bunch of markets in the area. We stumbled upon a closed-off section of river (let's be generous and call it a pond) where they have swan boats. What are swan boats? They're paddle boats that have a roof over them in the shape of a swan's back, and a swan head sticking out the front. For about a dollar per person, you can take one out on the pond. There is apparently no limit to the number of laps you can do around the pond, you just bring it back whenever. However, given the repetitive scenery and the dodgy water, you're not exactly likely to make a day of it. We wandered around until after dark, and then tuk tuked home. I was still full enough from lunch that a snack-sized bag of Sri Lankan funyuns was sufficient for me. Really, a shower was much more important to me than dinner was. I was gross!!! But that's one of the signs of a great day. 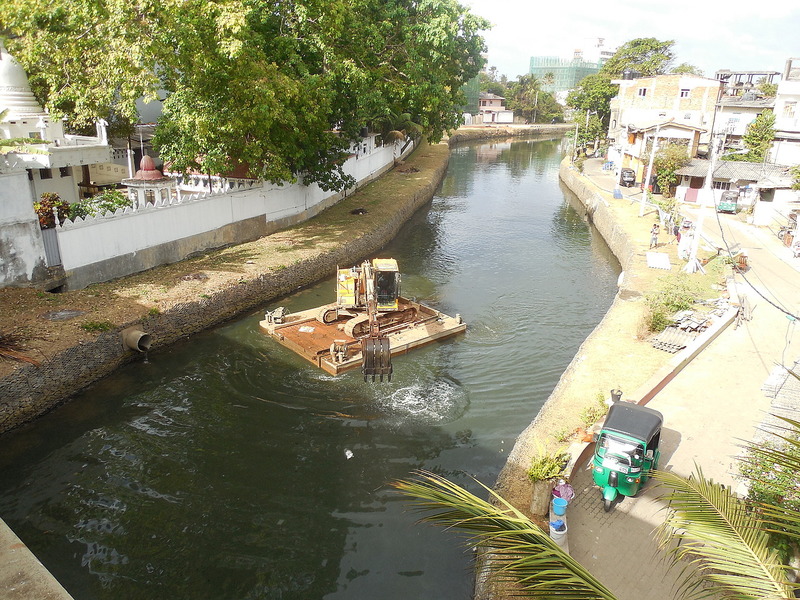 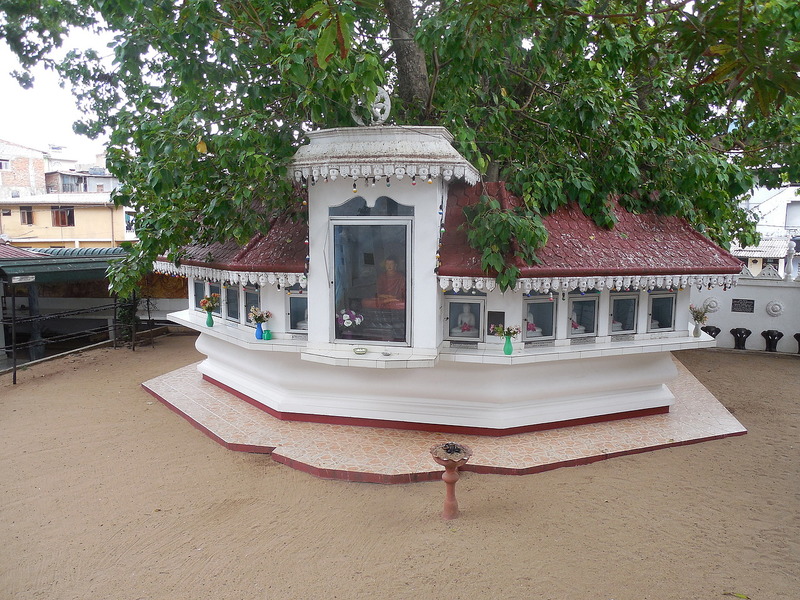 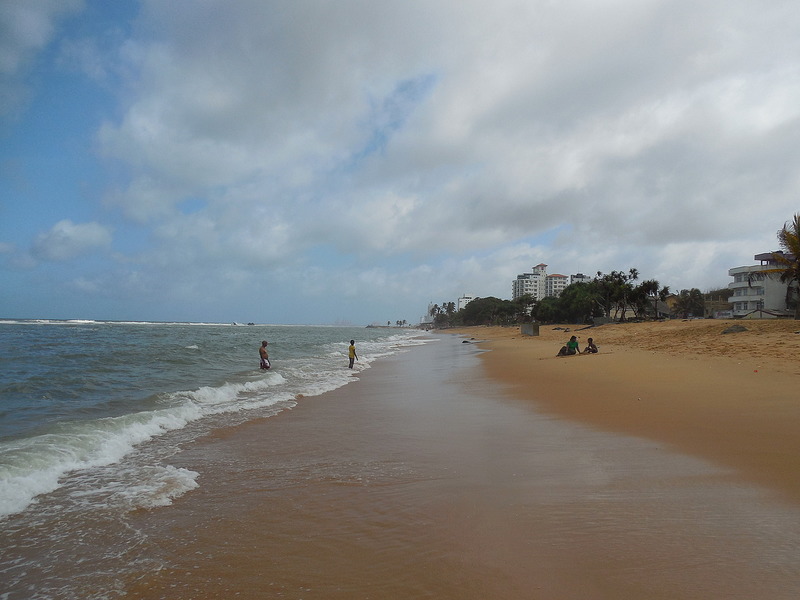 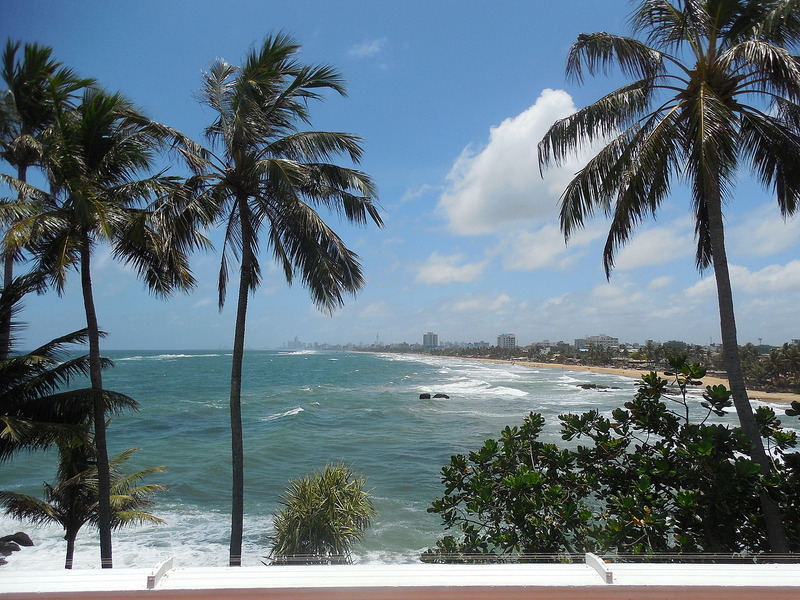 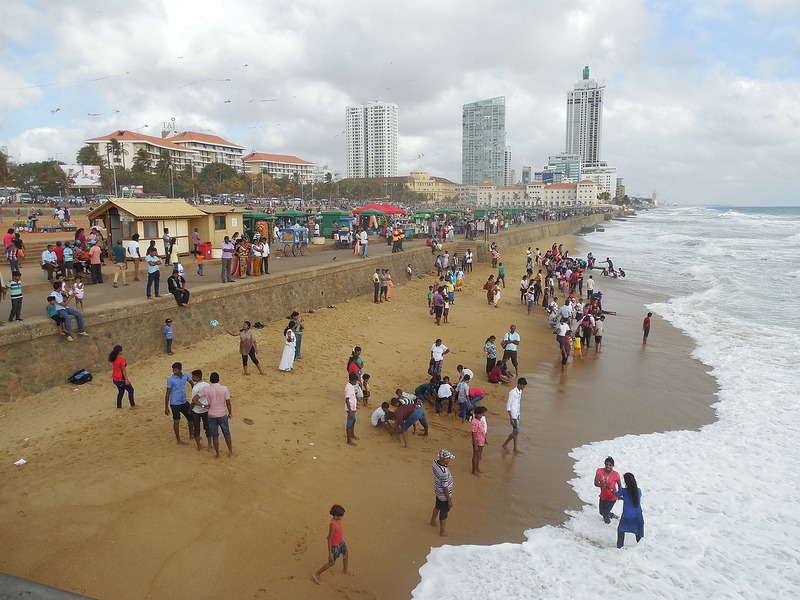 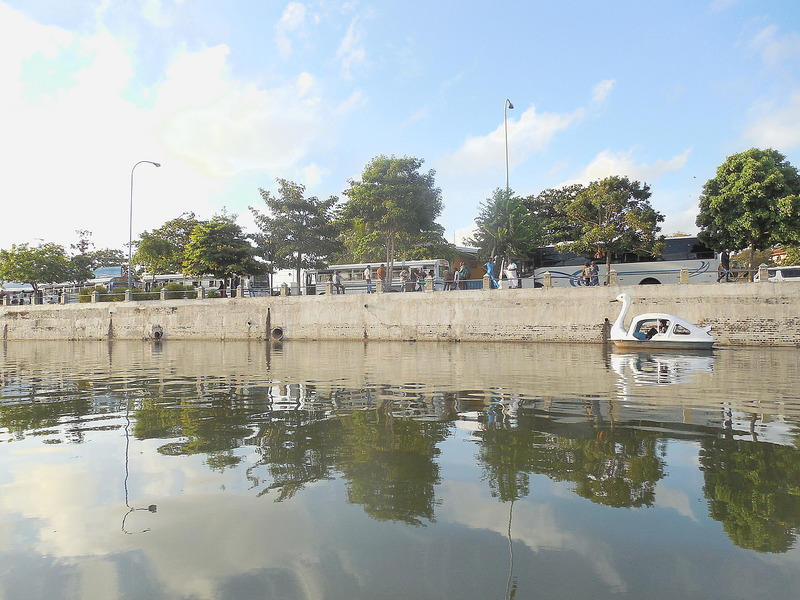