I'm on a bus (in Montenegro)

Today is my first day of the trip on my own. I didn't bother making plans for the rest of the trip, I figured I'd play it by ear and somehow get to Tirana in time for my flight. I started at the Dubrovnik international bus stop, which is right by the ferry port and conveniently walking distance from the hotel. I saw that they had an evening bus that wasn't advertised on the internet, and was very tempted to just leave my luggage at the storage facility and go sea kayaking until the later bus. However, I decided that it might be a better idea to get to Ulcinj earlier in the day when there's still light, as I didn't know where I'd be staying. Turns out, that was a great idea, as I doubt that the sea kayaking trips were still operating. It got pretty rainy pretty quickly. The entire bus ride actually had on and off rain, with more on than off. Other than a slight delay at the border (they did stamp our passports this time) and a slight traffic jam at Kotor, it was a relatively uneventful, if wet, ride. 90% of the bus disembarked at Kotor, and only a few people were left with me by the time we got to the end- Ulcinj. Upon arrival, many taxi drivers offered to take me and the other passengers to Shkoder, but they weren't going there, and I decided that nor was I. I had spent enough time on a bus already today and was kind of tired of sitting. Fortunately, there are a string of little hostels and motels right across the street from the bus station. I just picked one and went there. For 20 Euro (including tax) I got a private room at Hotel London. It's more of a motel, but it was clean and had good enough wifi, so I was fine. I headed out towards old town for dinner, but wasn't very lucky. This is clearly a beach town in off season. I passed a ton of closed-up restaurants, boarded-up hotels, and other businesses that were clearly closed for the off-season. I passed a couple of bars containing people smoking and drinking, but that's not a super-great dinner. Finally, I came to a grocery store. I stocked up on granola bars, fruit, and these cereal cups they had, so as to be covered for breakfast tomorrow as well. Clearly, I'm not at the beach part of town (what Ulcinj is known for) and not seeing the town in full swing, but I have to say that I'm not super-impressed. The packs of feral dogs wandering the streets made it feel less safe. The garbage littering the streets made it feel dirty. The part of Ulcinj I saw sharply contrasted with the parts of the other cities I've seen on this trip. Due to the shadiness and the fact that it wasn't too far from dark, I headed back to the motel with my forage and got stuff done instead of exploring on my own. Hopefully, by going to bed early, I'll be ok to get up for the first (6am) bus to Shkoder instead of having to wait around for the later bus. 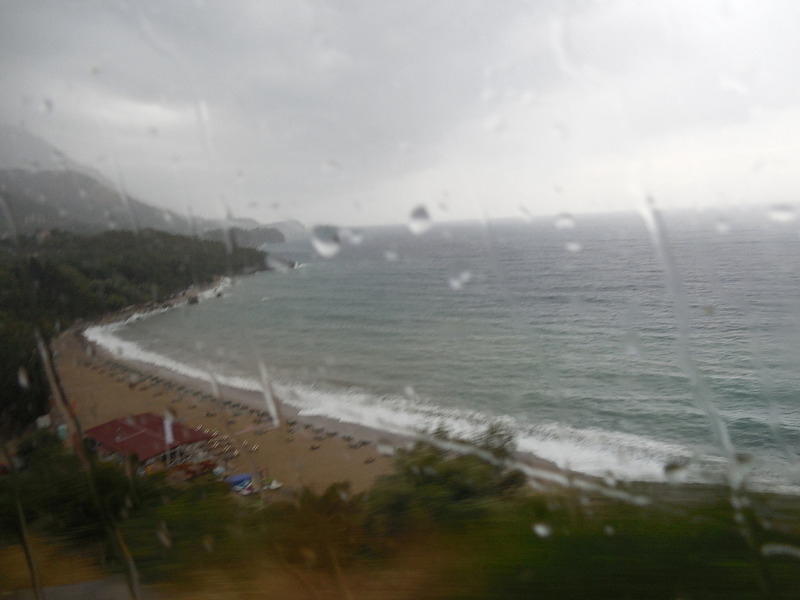 Posted by spsadventures 16:00 Archived in Montenegro