Today, we started back towards the coast. Our tour and transfer was organized by Portal Travel Agency. They had a driver pick us up and the hotel and bring us to a spot near Plitvice Lakes. Most of the rest of the people on the tour were coming round-trip from Split, and the bus was delayed by weather, so we had to wait at a little cafe. Generally, the sky was overcast and it was drizzling a little, which wasn't the best weather to go hiking in, but we actually had a very pleasant time because of the coolness brought by the non-sunny weather. Once we met with our group, we rode a little tram to the starting point of the hike, and hiked about 2 hours through lush vegetation and raging rivulets. The path was mostly a boardwalk system they have set up so that you can walk right over all of the running water. And running water is EVERYWHERE. There are thousands of tiny waterfalls, hundreds of bigger ones, and a few dozen large ones. These elevation changes are what separates many of the 16 lakes in the area. According to our guide, the water collects minerals from the limestone and runs over plants, depositing some minerals as it flows. Eventually, the minerals build up, and start forming a layer of rock on the bent-over plants. At this point, the rocks are green. Later, as the minerals build (up to a centimeter a year), the rock gets thicker and starts turning tan, the color of the minerals. Of course, there is airspace below the plants, so the rock is really only a shell that is hollow on the inside. That is one of the reasons he stressed staying on he path- if you start to walk on what looks like sturdy rock, you may find that it is only a shell and fall right through it. That's also why they say hat their rock is “living”- it's always changing.

The waterfalls were beautiful, but what was also amazing was how crystal-clear the water is. We could see all the way to the bottom everywhere, and could spot hundreds of fish with our bare eyes. The guide said that the water has to stay crystal clear in order to support the delicate ecosystem there, which is why we can't swim in the lake. Just look at the pictures- they say more than I ever could, and they can't even properly capture the clearness and the beauty. After a very pleasant hike, we took a little boat across part of the lake to where we stopped for a brief lunch. The choices were extremely limited, and I recommend just bringing your own lunch, if you can. From there, we continued hiking, this time towards the Big Waterfall. We passed a beautiful portion of the lake that is bright turquoise due to the minerals. Again, the lake was crystal-clear and just beautiful. Finally, we hiked up a ton of stairs through a cave on the side of a canyon that was formed by the flow of water through the rock. It was a steep climb, but a nice end to the hike.I highly recommend visiting here, and would even love to come back and do some more hiking myself at some point. The bus took us over to Split and let us off right by the docks, which was very close to our hotel. We are staying at Villa Olea, which is right off one of the main pedestrian streets. Because vehicles can't go there, we had to walk a little, but it was a flat, easy walk. Villa Olea is right in the UNESCO world heritage part of the city. The building may be historic on the outside, but it is clean, modern, and fancy-shmancy on the inside. The only negative about being historic is that there is a flight of stairs instead of an elevator, but if you can get past that, I highly recommend it. The lady at the front desk was extremely helpful at getting us situated, oriented to the city, and even recommended a great area to get local food for dinner. We went to a Kenoba, or local version of a tavern, where they had tons of local specialties. I ended up getting the Shopska salad, because even though it's the national dish in Bulgaria, I kept seeing it on menus here and was curious. It was good- nothing too special, but good. It was a nice end to the day. 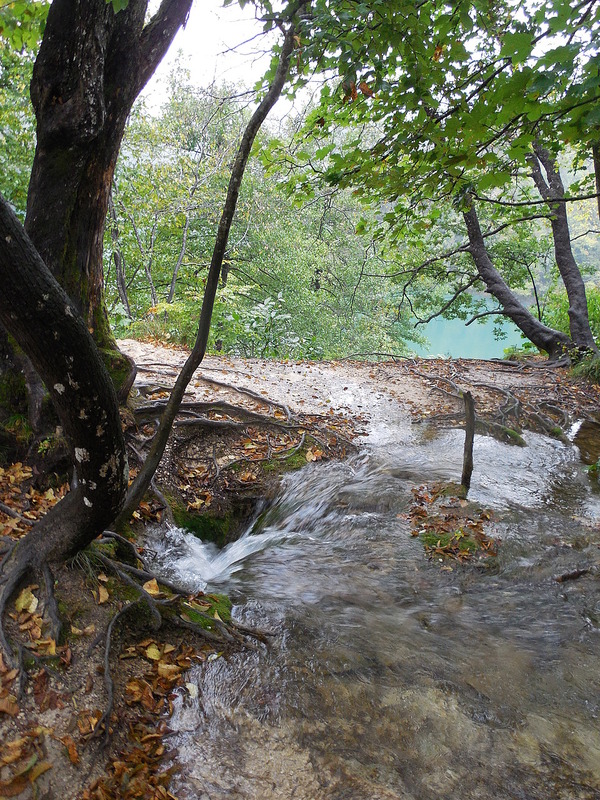 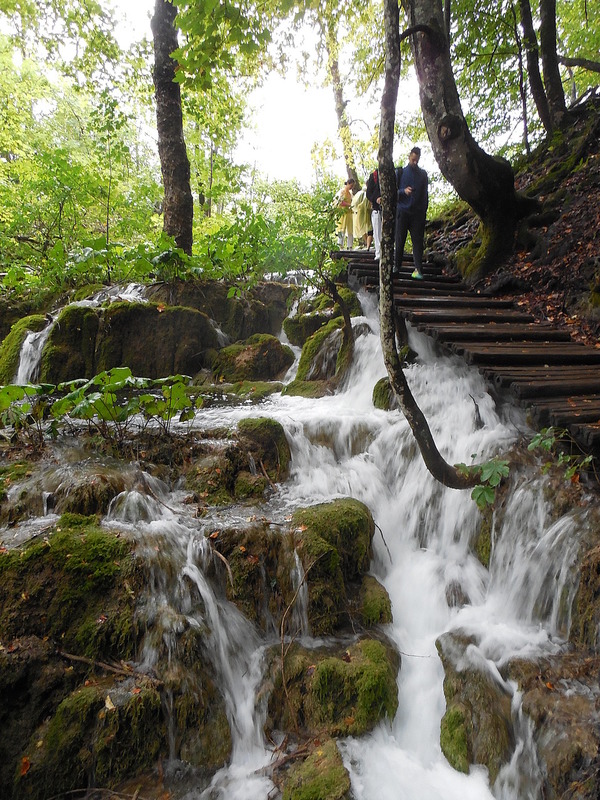 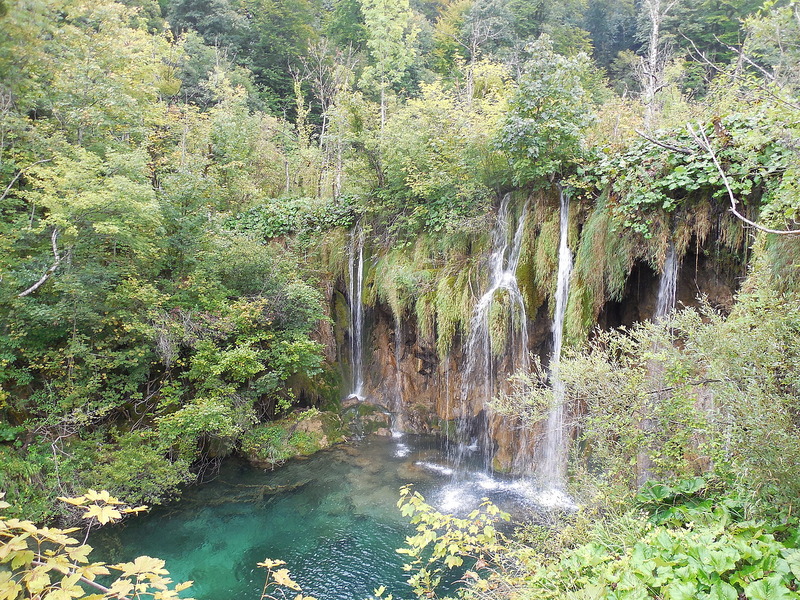 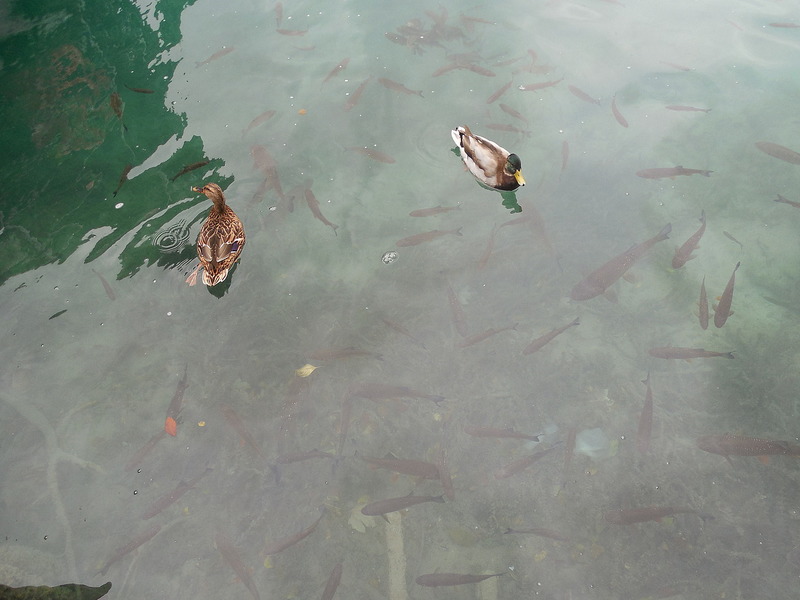 ducks and fish in Plitvice Lake 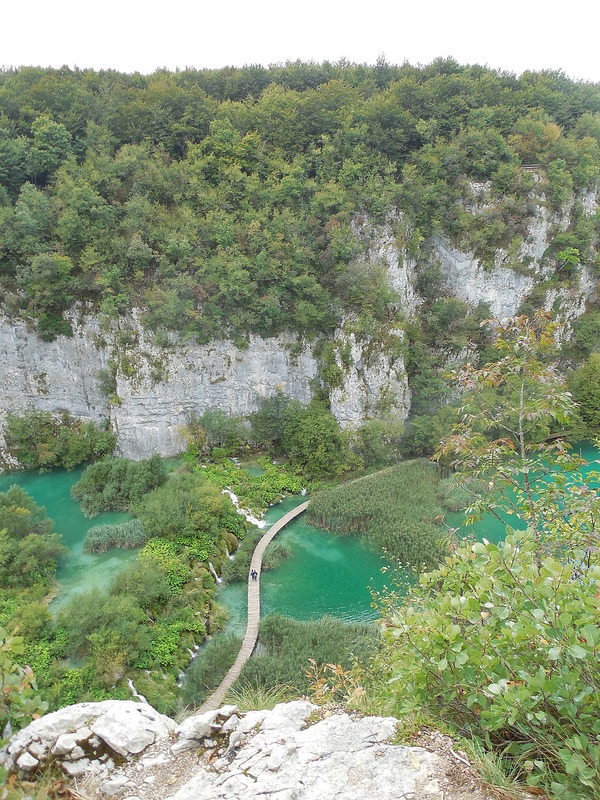