Today was a more chill day. After having to get up early every day, today was the sleep-in day, the get-stuff-done day. Mom went to the market. Dad slept, and I got some homework finished. We then had lunch at our hotel because the restaurant there was one of the oldest in all of Slovenia. We had been told yesterday that buckwheat is the national grain of Slovenia, and that all their food is normally made with buckwheat instead of white wheat flour. So, when my very brownish-purple raviolis arrived, I was prepared for the flavor of buckwheat and the lack of a glutinous texture. They were decent, although I have to admit that I prefer the mouthfeel of pasta that is chewier. We got to the train station well ahead of when we needed to, but we really wanted to double and triple check what the status was. See, last night on the news I saw that they had closed the Slovenian-Croatian border to trains just after we had entered the other day. (As in, if we had taken the next train, we never would have made it.) Since they weren't sending trains north, there wouldn't be trains available to go back south. The lady at the front desk of the hotel had called the train company for us in the morning, and as of the time of that phone call, the status was that our train ticket would get us on a train that would then take us to a bus to cross the border. We wanted to make sure things hadn't changed in the past few hours. They hadn't. The train was a bit late and there was a bit of confusion, but ultimately, we boarded a train that took us to Brecize, a stop relatively close to the border. This train was much cooler and more pleasant than the train we took into Slovenia, perhaps because the weather was nicer. At Brecize, everybody on the train disembarked and boarded a bus. The bus took us to the border, where we disembarked again, got stamped out of Slovenia, got stamped into Croatia, and reboarded the bus. The whole time, we could see the big mess that was the other direction. The line of buses and trucks trying to come north through the border was possibly a mile long. There were crowds of people just walking around, trying to get processed. They had set up a mini-fair with port-a-potties, tents, and food vendors. It was much more controlled than what I had seen on the news, but it was still a bit of a thrill to see “the news” in real life. The rest of the bus ride wasn't particularly noteworthy, and nor was the walk to the hotel or dinner. We had arrived much later than planned due to the train drama, so we just went to bed. 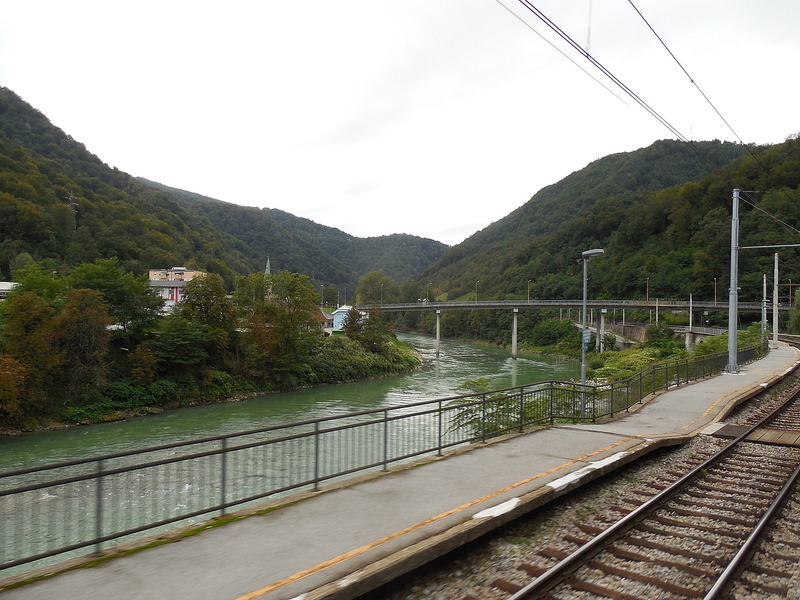