In air, water, and land in Budapest

Yesterday, I decided that I really waned to see the interior of the Great Synagogue. The only was that was going to happen was if I went to services there, so I got dressed somewhat nicely and went. The interior of the sysnagogue is incredibly beautiful. It reminds me of a Catholic cathedral in that everything seems to be covered in gold and gilding and there is a big organ up front. It reminds me more so of a big mosque though, in that there are no pictures of people, only geometric designs all over the walls. The architecture is amazing. This place was built for thousands of people. In just the main building, there are 3 floors of space for people to sit during services. Even if you just used the bottom floor, I think you could easily fit over a thousand people as this place was immense! Actually, that is what made me really feel, possibly for the first time in my life, the real impact of the Holocaust. There are old pictures of this place being filled to the brim with people for services. On the second day of Rosh Hashana, this place was empty. At 9, when services started, they barely had enough people to start (10 is the requirement) and even by noon, after the torah service, there may have been as many as 30 total, if you count all the people who came and went. For those who aren't familiar with the context- that's like a church that used to have thousands of people attend services on a regular basis having only 30 people attend Easter mass.

While there are many valid non-holocaust-related reasons why a population as a whole might have shrunk and why fewer people may be turning to religion, I have to believe that a majority of the impact is holocaust-related as the city outside is still full of people and life. For a community to drop from thousands to few handful, and to see that via all of the empty seats, was extremely powerful. Reminder of genocide effects aside, I did enjoy the service. It was not at all what I'm used to in so many ways, so it was nice to get this completely different experience. After, I as hungry, so I stopped at a restaurant nearby that had a great Hungarian cheese soup and some sort of noodles in a cheese sauce. Again, like in Slovakia, I wasn't sure if they were really large spaetzle, thin gnocchi, or something else local that has a different name. (If somebody knows what they're called, please help me out here.) As I wore my "nice" clothes to services and needed to change into my ratty clothes to go caving later, I headed back to the hostel for a change and a quick nap, with plans to get my bus ticket for tomorrow and then head over to Margaret Island and walk around a bit. Apparently I needed a nap more than I thought, because I woke up way after I planned to and didn't have so much time before my caving tour anymore. I abandoned the idea of going to the bus station to buy my ticket ahead of time and instead opted to take a boat on the Danube and see Margaret island.

One of the cool things about the day pass is that it includes lots of forms of public transportation- metro, trams, buses, and the Danube river ferry. The ferry has several pickup and drop off points along the river, and goes at just the right speed for me. It moves quickly enough that you don't get bored, but slowly enough that you can enjoy the views as you pass. For those who want, there is even a bar onboard.

The ferry dropped us at the bridge to Margaret island, and I took a tram to the middle of the bridge, which is also the entrance to the island.

Margaret island is a very cute place to go for a walk. It is forested, has excellently-paved pathways, and there are tons of spots for people to just sit and enjoy the nature. I saw tons of groups just chilling on the grass, joggers, and couples strolling hand-in-hand. I did not visit the zoo or sports parks that are on the island, so without them, it basically just becomes a really pretty park. Then, it was time to go caving. In the spirit of this trip full of wandering and making decisions last-minute, I didn't remember to see if any buses went to the cave. In order to make sure I didn't get left behind, I left over a half hour to get there. Haha. I started out properly, taking the metro to the S(NAME) station and then getting on the 65 bus. However, when the bus turned off the road I needed, I got off the bus as I didn't have time to wander and this area of town wasn't on any of my maps. Instead, I started hiking up the hill. And it is quite a hill. Had I not taken the bus the first few stops, it would have been well over a half hour hike, uphill the whole way. As it was, I got there right on time, just to notice that the bus did stop at the caves. The caving instructors weren't ready though, so I grabbed a seat in the "lounge" area and rehydrated. Eventually, they called us to form groups and then had our group wait for the other group to get started. By the time we got started, it was approaching an hour after the time they told us to be there. It was well worth the wait though. The cave was a lot of fun and the instructor was excellent. She briefed us, had us all climb down the entrance ladder, through a hole and into the first "room" of the cave before stopping to make sure we were all ok. My group was all young people 20s and 30s, and they were all much smaller than me- some like a foot shorter. Nobody had any issues physically or mentally, so we continued. As we crawled on our bellies, slid on our butts, and otherwise navigated through the tiny spaces, the guide would periodically stop us in a space where we all fit in and tell us stories about caving, Hungary, and the geology of this particular cave. We saw ancient fossilized sea shells, heard her sing a Hungarian song in the "theater" and at one point, all shut off our lights and attempted to navigate a section blinded. Unfortunately, I had to cheat for a second. I hit what I thought was a dead end and the person who was supposed to be in front of me, guiding me, was nowhere to be found. After that brief moment though, the lights were out and we continued in pitch black. For those who read that and immediately think "no f*ing way I'm doing that"- the guide gave us choices for everything along the way. She kept carefully trying to read the group and make sure that we were all ok the whole time. I get the feeling that if people had been tiring or freaking out, we wouldn't have gotten to see as much of the cave as we did, which is why when I realized I had a minor health issue that nobody could do anything about while we were still in the caves, I kept my mouth shut and adventured on. It turned out to be the right choice. I have to say that I highly recommend the cave tour to anybody who is not claustrophobic and has full range of bodily motion. It was a ton of fun and helped make the trip very unique. I do have to say though, that if you can't crawl or you think bruises all over your body are a problem, this might not be the tour for you.

Physically, I was incredibly beat after the tour. I bussed and metroed back to the hotel area, grabbed breakfast snacks and another burger from the stand for dinner and was both completely ready to pass out and still very physically excited. I did manage to sleep a bit though. 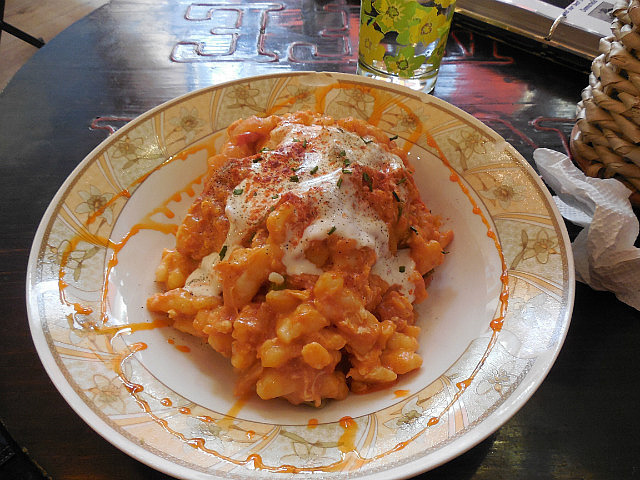 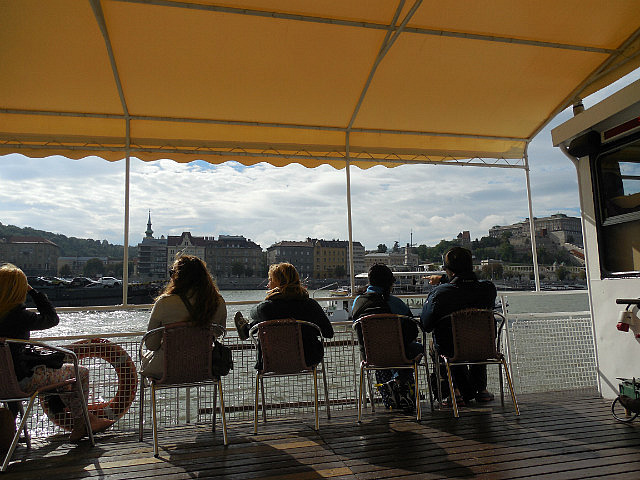 Boat on the Danube 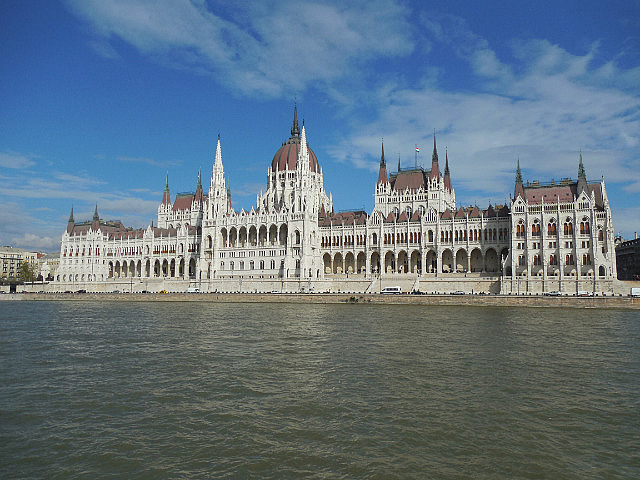 Parliament from boat on the Danube 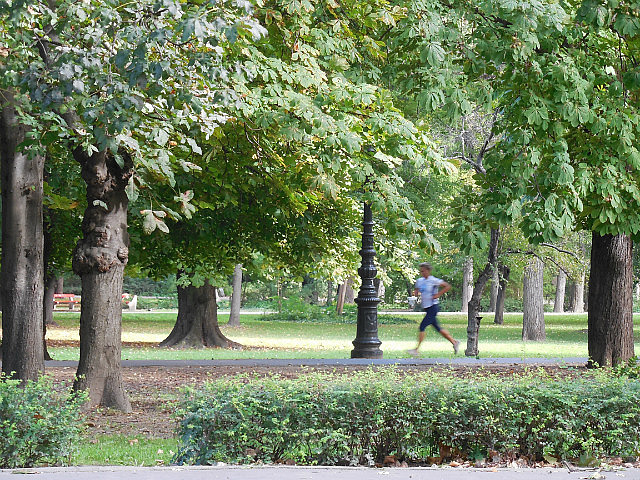 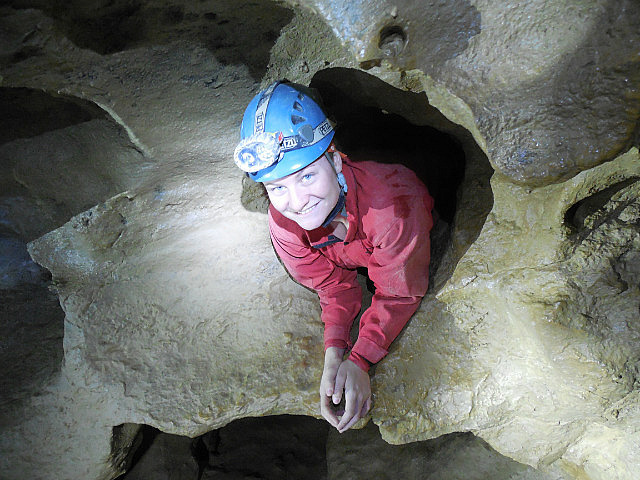 Posted by spsadventures 16:00 Archived in Hungary