There aren't so many flights out of Uluru, so we ended up with half a day to kill before we got to leave. I did laundry- woo hoo. I did get a chance to read and relax while it was running though, so it was nice to have some more continue. We arrived at the Cairns airport, which was another airport where they pull stairs up to the plane instead of having gates. As we walked off the plane, the sauna hit us smack dab in the face (and everywhere else). It was hot, muggy, and just generally gross. However, there were no flies, so it was ok by me. Perhaps the silver lining to Uluru is that it made Cairns seem better by comparison. Normally, I would complain about a hotel with ants. However, compared to the huge nasty things at Uluru, we didn't say anything. Other than the ants, which probably get in because some of the windows only have shutters- no glass, no screens- our hotel was one of the best we've been to. It's fancy without being pretentious, so it seems a lot nicer than other places. I think its elegant simplicity makes it stand out more than places that are clearly trying too hard to be nice. Plus, our space is huge. Mom has her own room, Rachel and Mike share a room with their own bathroom, Shanaenae and I share a room with a bathroom, plus we have a living room with a view of the pool and a mini kitchen (in addition to the multiple microwaves, minifridges, and tvs in the other rooms). We didn't really have time to do much the first night other than get settled. Most of Palm Cove shuts down by 7, so we didn't have too many choices of things to do anyways. We went to El Greko, this Greek restaurant. Our appetizers came out pretty quickly and were good. I even got graviera cheese, which I had never had before. (Although it is halfway between a bread cheese and a Haloumi, so it wasn't too different and crazy.) Then, a belly dancer came out. At first, we just watched and had fun, until she tried to pull us up to dance with her. Mom party pooped, so the dancer tried to pull me up. I stood there and embarrassed myself for a while until she let me sit back down. And then, we waited. And waited. It was over an hour before our food came. It was good, but not worth an hour's wait. Moral: don't go to El Greko in Palm Cove. We got in much later than we expected, and so went straight to sleep as we had to get up early the next day for.... ...The Great Barrier Reef!!!!! 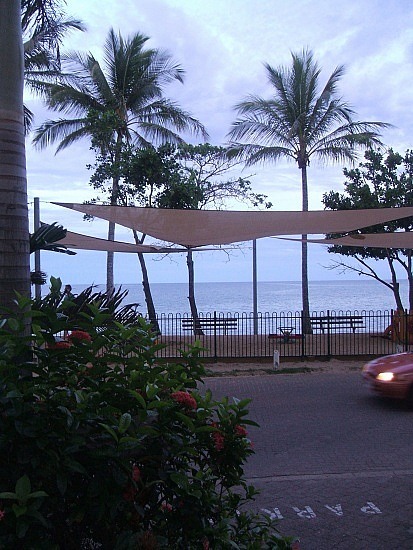 The view from our hotel