Snow. In Israel, this is a relatively rare occurrence outside of the high mountains like the Golan. But, every few years, Jerusalem gets some as well.

I was planning on coming to Jerusalem anyway, but the threat/promise of snow made me want to come even more. Yesterday, they were closing the roads and then reopening them and then closing them again, so I had ot take the train in, in order to guarantee an arrival. When I got here, there was a light dusting (1 cm maybe) of snow on the ground and sticking. VERY COOL. However, that meant that most Israelis were (smartly) not driving. They don't know how to drive in the snow, so it's smart not to. There were very few cabs available at the train station and everybody was trying to see if somebody was going in their direction so they could split one, trying to see if the cab drivers had cab-driving friends who they could call to come pick people up, and trying to convince the drivers to come back after their dropoffs. Despite the cab shortage, people were generally behaving themselves and not pushing or fighting over the cabs. I got one (shared) and we got on the way to my cousin's house. There was virtually nobody else on the highway, but as soon as we got near somebody, they switched over 3 lanes and cut us off in the process. WTJ? Why would anybody on a big empty road intentionally drive near somebody else when they don't have to? And cutting somebody off in the snow? Seriously, if you can't drive in the snow, stay off the road.

I slept at my cousin's house and got up nice and early to go participate in the Women of the Wall prayer session. It was quite a trudge through the snow. About 5 inches had already built up on the ground and nobody had cleared anything. The sidewalks were no good, so the few people who were out in the street were literally walking down the middle of the street where the car tire paths were. A few streets looked as if they had been plowed, but very few. I passed a couple of people making snowmen, snow angels, or having snowball fights. It was so fun to see. When I got to the Kotel, some people had already built a snowwoman in the plaza, but it was pretty empty. I have never seen it that empty before. Also, there were more women praying than men, which is something I've never seen before. When I joined, some of the boys on the men's side shouted their standard "shut up" in Hebrew to us, but then started throwing snowballs over the dividing wall at us. I have also never had snowballs thrown at me at the Kotel before. After the first few though, one of the guards and some of the husbands made the boys stop. The service continued and there was a Bat-Mitzvah. This was the first time I had ever been snowed on during a bat-mitzvah ceremony. It also hailed a little, but the winter weather just made everything more special and unique. I am willing to bet that the number of people who can say it snowed during their bat-mitzvah at the Kotel is countable on 1 hand.

Afterwards, most of the nearby shops were still closed. I think a lot of people decided that opening late for an early close was not worth it and just stayed closed all day. I ate at the one falafel place that was open, and it was the best falafel I've ever had, probably mostly because I was so hungry from the hike through the snow.

I then wandered around the old city and towards the old train station. Just seeing the city covered in snow was gorgeous. It looks like a completely different place. I also got to see so many kids who were clearly playing in the snow for the first time. And, I got to see what passes for boots in Israel. Israeli snow boots are just regular shoes with plastic grocery bags over them. I saw so many people with grocery bags on their feet- people of all ages, ultra-orthodox and not. I can't help but wonder what kind of traction that gives them and whether it really keeps the water out or not. Plus, how do the bags not tear? Or maybe they do. In any case, it was quite the fashion.

As the sun came out, I started to notice that the sky was no longer leaking, but that the trees were. The snow was melting almost as quickly as it built up. By the time I had moved to the hostel, the streets were mini-rivers and the sidewalks were mini-rivers flowing under a pile of slush. I love the snow, but not the slush so much. I had plans for dinner, but I did want to make sure that I was good for lunch tomorrow, so I headed over to Mahane Yehuda market. Most of the stalls had clearly not even been open today, just like most of the stuff in old city. A few stalls were open, though, and I got some good deals because it was close to the end of the day. Towards the end of the day, people just want to go home, and since the bread won't be good on Sunday when they reopen, they're willing to sell it for anything. I got some reasonable deals when I first got there, but on my way out, people were shouting "1 shekel. Everything 1 shekel." I got a bag of about 10 fresh pitas for a shekel (about a US quarter). I also got some cheese from about the only place open that had it, some olives from about the only place open that had olives, and debated getting produce from one of the two produce stands that were open, but decided against it. Despite almost all of the shops being closed or close to it, there was a bar that had quite a lively business going. They were blasting music and people were dancing in the street, basically in a big shallow pool at this point. I got back to the hostel, got a little more settled, and got ready to go back to the Kotel. I had heard that there are tons of people there at sundown on Friday nights, like a big party. But ,it was pouring rain when I got to the door. I have no issues with tromping around in the snow, sliding a bit through the slush, but just being wet to be wet is not my thing. I turned right back around, ditched my wet clothes and boots, and changed into dry, warm pants and regular sneakers.

I'm here at the hostel, meeting interesting new people and waiting for Shabbat dinner. I had seen it advertised last time I was here, and was curious, so I made plans to do it tonight. 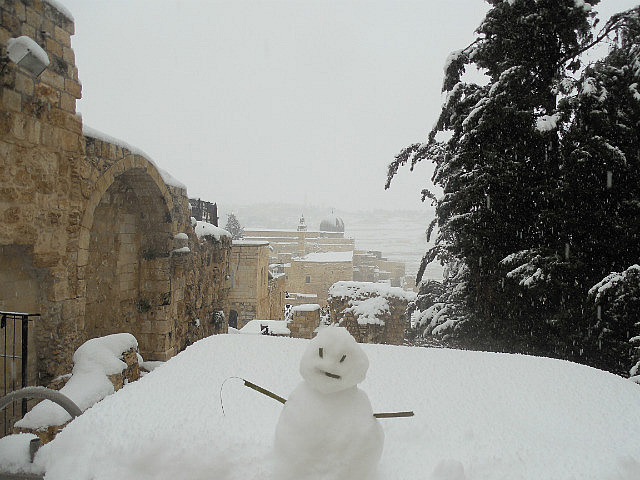 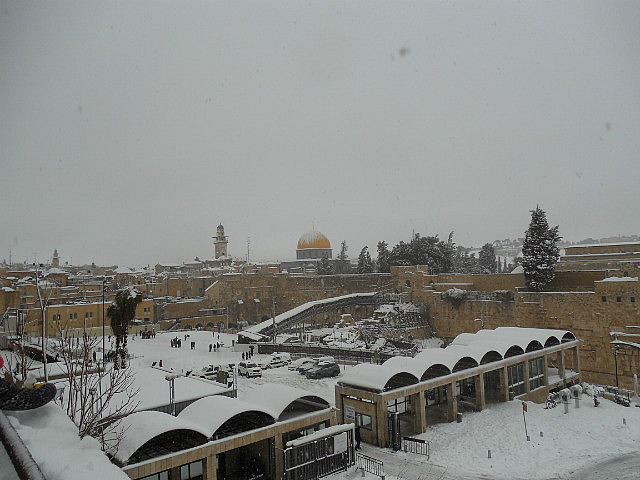 Kotel and Dome of the Rock 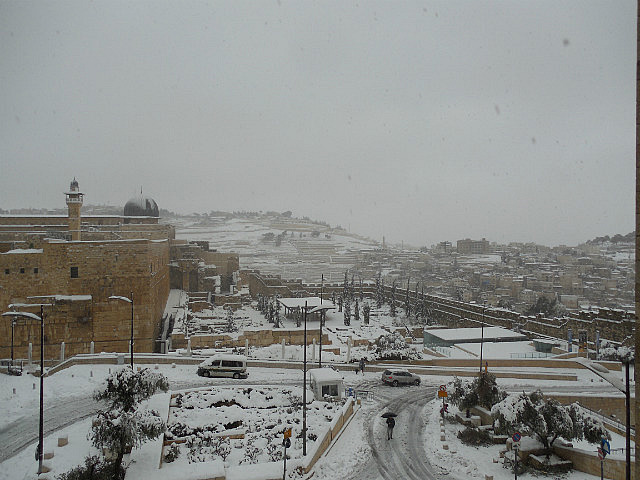 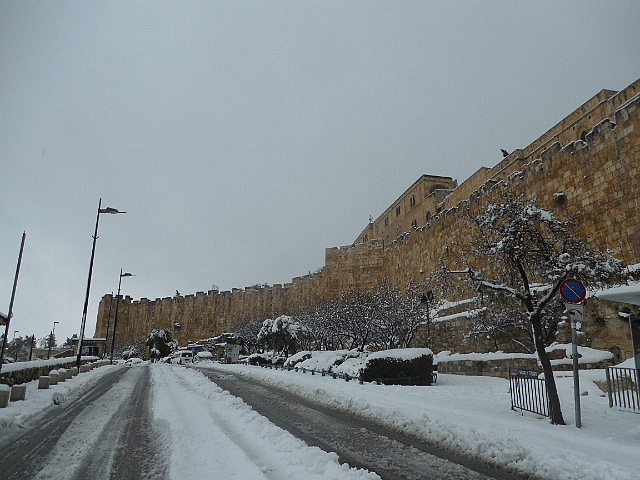 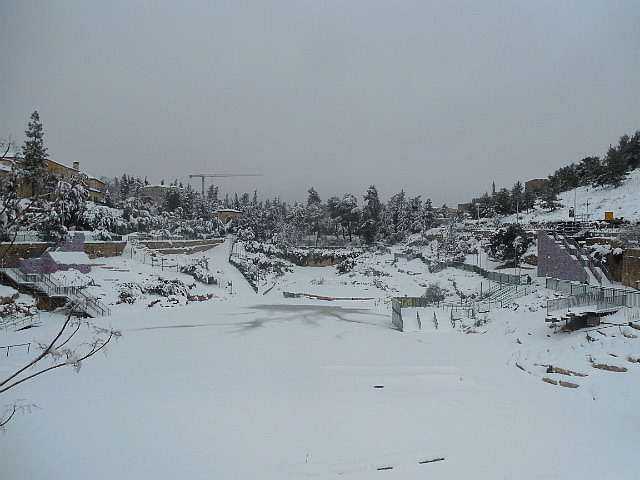 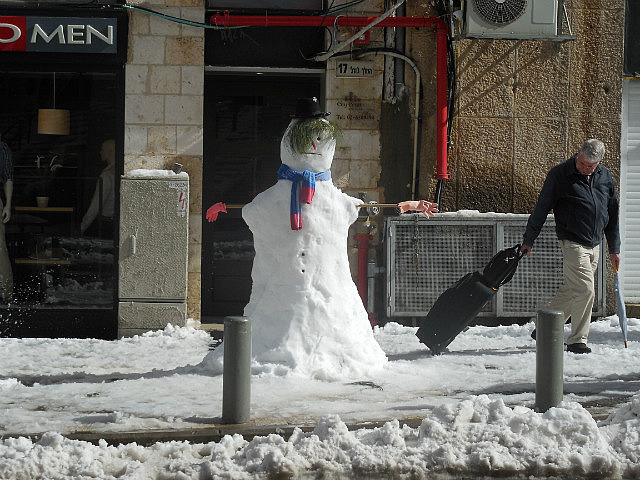 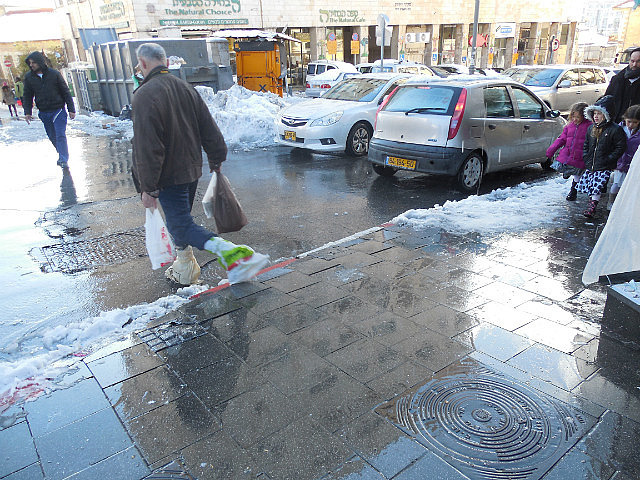 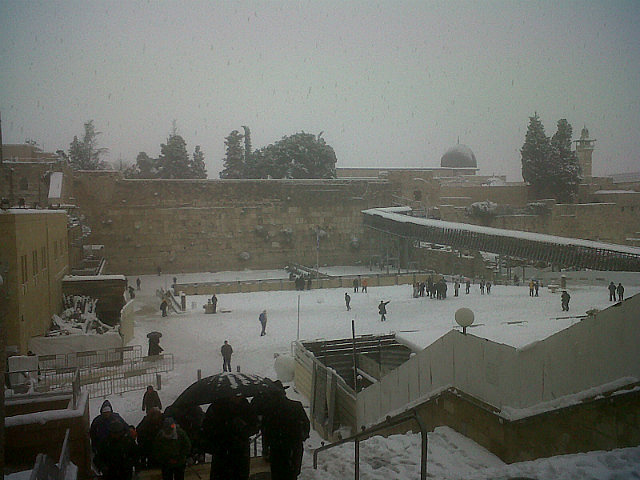