Lag B'Omer is a Jewish holiday that falls in the spring, 33 days after Passover. (Lag means 33.) It is the only day between Passover and Shavuot where joy is allowed. Of course, why joy includes weddings and shaving your beard to the super-Orthodox, I don't know. What I do know is that one tradition for Lag B'Omer is for hundreds of thousands of people (mostly Orthodox Jews) to visit the tomb of a famous Rabbi (Rashbi, which stands for Rabbi Shimon Bar Yochai) in Meron. Most of the Israelis I asked about going said that it was a crazy idea and that I'd have to be stupid to go. However, none of them had ever been, so I decided that they didn't really know what they were talking about and that it would be a great idea to go. The first part of my journey was just figuring out how to get there. The only information I saw on the internet was that police were going to turn away all private vehicles and that only buses were allowed. Otherwise, there were no special bus schedules I could find. So, I just went to the central bus station in Karmiel to wait for one of the regular buses to Meron. The adventure began there. There was a large group of Orthodox Jews also waiting, but not as large of a group as I expected. When the bus to Meron came, it looked relatively full, but there were a few seats left. The driver let someone off, and did not open the doors to let anybody on- big mistake. The Orthodox men stood right in front of the bus and wouldn't let it leave. So, the bus driver started to back up to go around them. They then followed the bus back and stood right at the front of it, their own little protest. The bus driver was not happy, and after a short shouting match, called his boss. Meanwhile, some of the Orthodox also pulled out their phones to call someone, and the poor passengers who were already on the bus were further delayed from their destination. Eventually, after at least 10 minutes of arguing and phone calls, the bus driver relented and allowed some of them on, but of course more wanted on. It took a guy in military uniform physically barring them and a woman on the bus shouting at them that there was no more room to get the incoming flood of people to stop. It was quite the scene and I wanted no part of it other than just laughing. The bus left. Each bus that arrived, the Orthodox flooded the driver and asked if he was going to Meron. In one case, they even tried to bribe a driver to take them to Meron, even though his line went nowhere near there. Finally, a correct, but full bus arrived and they flooded on. At the same time, a different bus driver arrived with a relatively empty bus and I finally made it on to a bus, and even got a seat. Meron is only a few minutes from Karmiel, so it was a relatively short and uneventful ride. There was a bit of a delay as there were several private cars that were trying to get past the police checkpoint, despite the "buses only" signs. The buses let us off at the entrance and then the real fun began. Everywhere, there was a flood of people. Unlike the angry people arguing to get there, these people were joyous. As I walked the streets, I saw people singing, dancing, and praying. There were street vendors selling everything from shawls and light-up toys to bibles, ritual hand-washing cups, and portraits of famous rabbis. Everywhere I turned, I saw action, hubub, and excitement. I wandered up the hill, from whence a stream of humanity was flowing. Despite going in the opposite direction as the mass, I wasn't particularly jostled, and people were certainly allowing me to move in that direction. The building containing the tomb is at the top of the hill. Just outside the tomb were throngs of people praying and lighting candles. Just a bit past it is a large plaza where hundreds of men were dancing to loud, upbeat music as hundreds of spectators enjoyed the sight. Of course, I wanted to join in the dancing because I think doing is more fun than watching, but I also recognize that just as not everybody gets to march in the thanksgiving day parade in New York, not everybody gets to dance in the plaza for Lag B'Omer in Meron. Either way, I enjoyed watching the bonfires blaze, the dancers dance, and listening to the joyous music. It was pretty much impossible not to be uplifted by the energy and happiness that filled the air. Past the plaza, people had set up a kind of "tent village." There are pilgrims who come well before the holiday to Meron, and they made their own place to stay. Some of the tents were traditional camping tents. Others were more like frames with blankets. Some even had furniture in them! The plaza and tent village marked the edge of the festival activities, so I turned around and headed back down the hill, stopping to check out several stands along the way. The only negative thing I have to say about the festival itself is that there weren't nearly enough trash cans for the amount of people handing out fliers. The streets were coated in papers like it had just snowed information.

I also wasn't super-pleased with the organization of the buses outside the festival. There was no signage telling people where to go. The cops and guards kept giving out misinformation. It took me quite some time to finally figure out where the buses were actually loading. However, the nice thing was that all buses were free, and they were running a lot of shuttles to Karmiel. Apparently, if I had gone to the other side of town (by the BIG center) instead of the main bus stop, I could have gotten on one of the regularly-running free shuttles to Meron. Good to know for next time. Usually it is less then 20 minutes between Karmiel and Meron. It took us more than that just to get out of the parking lot. However, once we did, it was a relatively quick ride. I was all the way home around midnight. 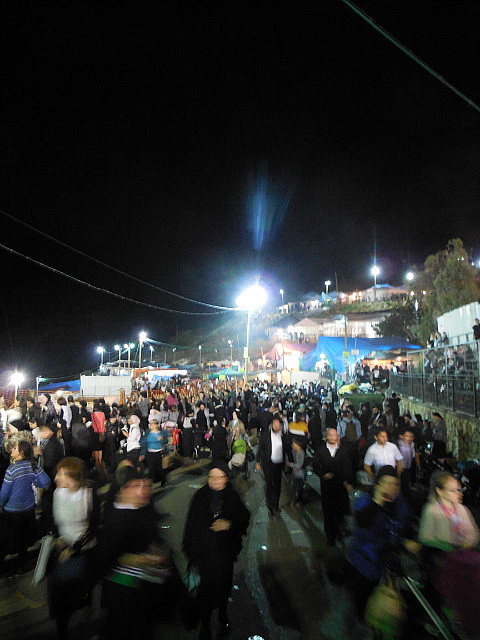 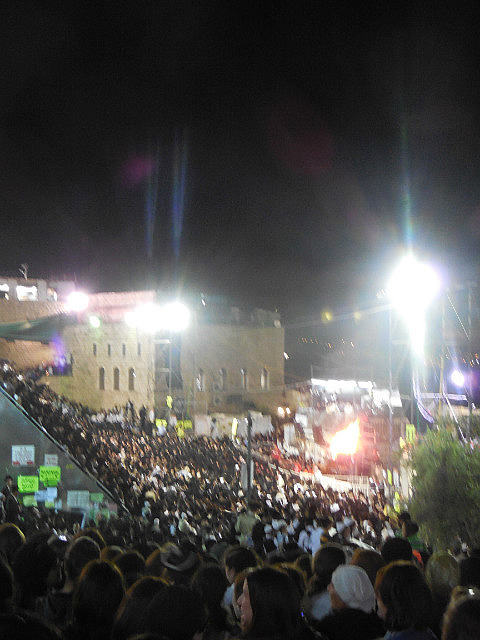 Men dancing by the tomb 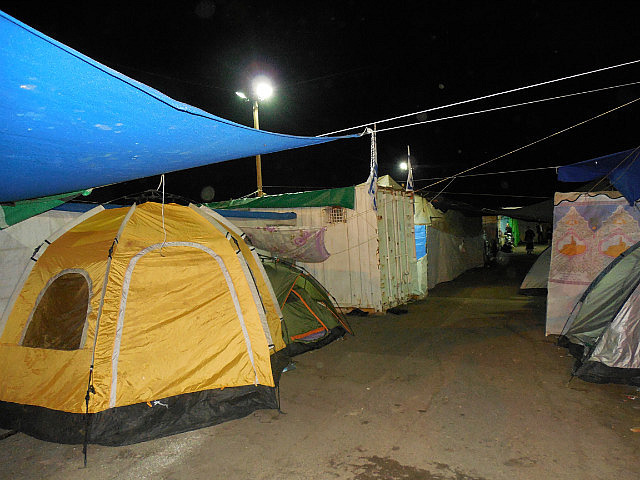 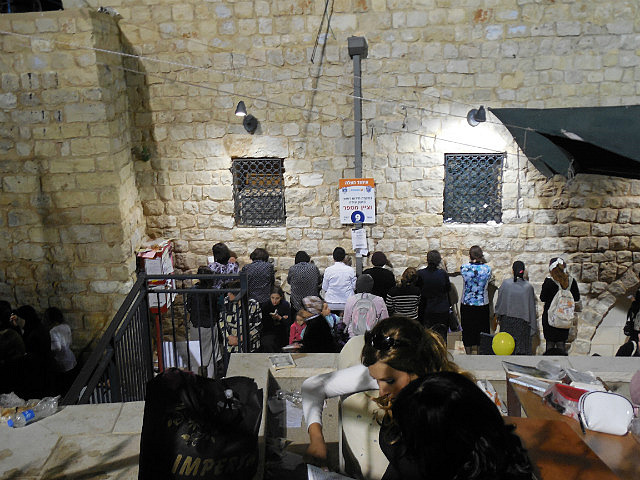 Praying at the tomb 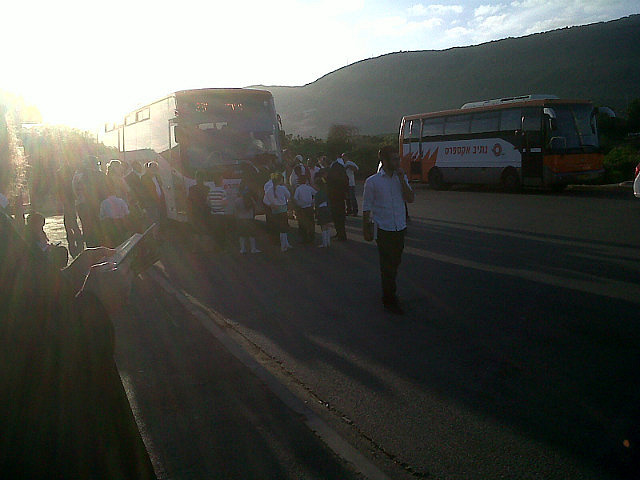 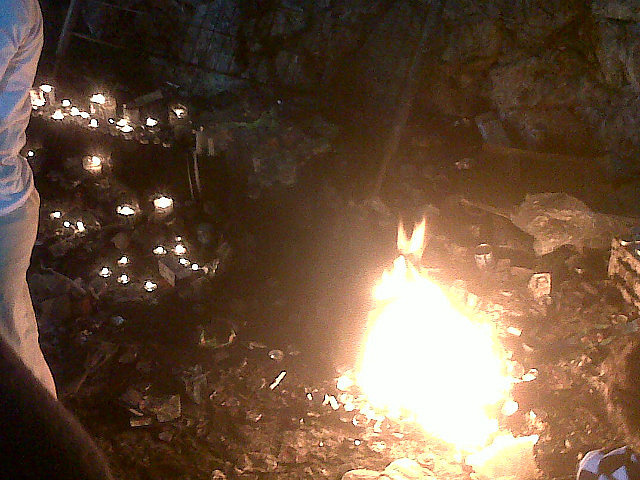