I headed back to Prague. When I had been there the weekend before, I had learned that the guy at the airport bus ticket counter doesn't break big bills. Of course, anybody who came from abroad and just got money from an ATM only has big bills. He makes you pay with your credit card. This time, I was smarter about it because I had change (intentionally) left over from last weekend. I skipped him altogether and just bought a ticket from one of the automatic machines out in the bus area. This time, I was staying in a 4-star hotel and not the hostel. One, I had so much luggage it wouldn't have fit into the lockers at the hostel. Two, I didn't want to schlep it all up the stairs just for two nights. Three, I knew that I'd want some peace and quiet and to be by myself to recover from my week in DC. Four, I wanted to stay across the river from the main part of town so I was closer to the observatory and things I ahdn't seen instead of close to the things I'd seen. And lastly, I got a great deal on it so it was actually pretty cheap. From the airport, I had to take the bus to a stop that was just around the corner from a tram station. It's good the tram was going by as I got off, or else I would not have seen the tram station and might have gotten lost. The tram lets off basically right in front of the Pyramid hotel, which is in a nice, quiet neighborhood. One thing to note is that there is no automatic ticket machine at that stop, so if you want a ticket for the next day, you should buy it wherever you bought your ticket for the first day, and just don't activate it until the next morning.

The hotel lobby is exactly what I would expect from a 4-star hotel. It was well-decorated, shiny and new. The service was excellent. The hallways and rooms probably weren't redecorated as recently, but they were immaculately clean with no trace of mold, even in the bathroom. My room was also very large for a European hotel room. It was almost the size of a US hotel room. By the time I was settled and ready to go out, I decided that I would postpone going to the observatory because I was hungry and it was late. I wanted as much time as possible there and not to feel rushed. Instead, I took the tram to town and found a Chinese restaurant. It had a buffet, but I ordered off the menu. Maybe the Czech palate doesn't do spicy at all, becasue when I asked for "regular spicy" I got what I would consider mild. Otherwise, the food was what I would expect at any Chinese restaurant in the states. Afterwards, I walked around town and again marvelled at the souvenir shops that were open until 2am. Do people at bachelorete parties really get drunk and say, "Hey, we should go buy a new plate set! That's a great idea!" and then actually do it? 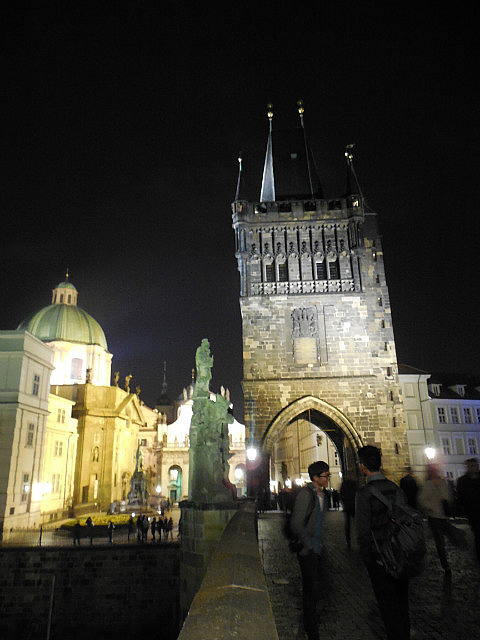