The trip to the airport was pretty uneventful- caught the bus, caught the train, checked in. (Although there was some minor drama at the check in.) I did meet some people on the way- a guy who commutes via Bieber bus to his job at a nursing home in NYC, a Mexican guy who was drinking on the train, some chick on her way to Atlanta, and some Irish ladies- but nobody particularly interesting. It was actually pretty nice to get to the airport way early and not be super stressed about just barely having enough time to check in and run to the plane before thy closed the gates though. I wasn't in a rush, so I wasn't as stressed out about everything that slowed me down. I did manage to lose a pair of socks and a can of Pringles on the way though. Lesson learned- don't put things in the outer pocket of my backpack. It's a small price to pay to figure that one out early. I can always just get another one. I just hope that some homeless person found the can and is enjoying it and found the socks and is warmer for wearing them. There was some drama with one of the flight attendants on the Continental portion of my flight spilling on me and not caring- not even enough to get me a napkin the SECOND time I asked, but beyond that I just mostly slept. I met my family in LA and we all flew to Australia together. When we crossed the international date line, we celebrated the first night of Chanukkah on the plane with my homemade, battery-powered menorah. There were presents and everything. We got to Melbourne ok. I'll fill in details of all that stuff tomorrow. 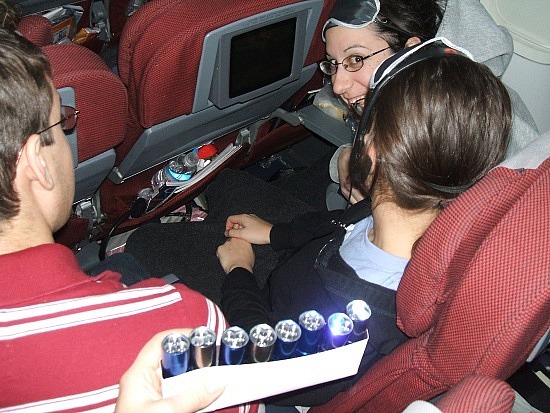 Chanukah on the plane

Next Table of contents